About a century after their discovery, chromatography techniques have become extremely important in instrumental analytical chemistry. They contribute to the solution of analytical problems which would otherwise be impossible to tackle. Think, for example, of multiresidual analysis (pesticides, herbicides, etc.) of fruit and vegetables, which makes it possible to control the use of (about a thousand) substances that are in some cases highly toxic to people and animals. Chromatography was an incidental discovery, but it has become essential for dealing with analytical problems whose complexity has continued to increase and which requires even the separation of chiral compounds (substances which only differ in the spatial arrangment of substituents around a chiral carbon or, in more general terms, which are not overlapping – called “stereoisomers”).

Chromatography was first employed by the Russian biochemist Mikhail Tswett, who succeeded in separating chlorophyll from a vegetal extract in 1906

Experiment: Tswett had mixtures of coloured plant pigments pass through a glass column filled with calcium carbonate. The pigments separated into single coloured bands along the column. The word chromatography derives from the combination of the Greek words chroma (colour) and graphein (write).

Through his experiment (see right) Tswett showed how this fractionation technique could be used, thus laying the foundations for modern chromatography. 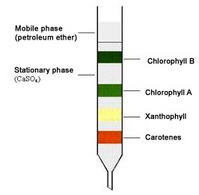 The term ‘Chromatography’ is currently used to refer to all the separation and/or analytical techniques based on separation by distribution between two phases: a stationary phase (immobilised) and a mobile phase (eluent). A chemical species deposited on the stationary phase, and introduced into the flow of the mobile phase, will distribute itself dynamically between the two phases, in proportion to the affinity it shares with them. The mobile phase is usually a liquid or gas which flows continuously over the stationary phase, which may be a solid or a liquid, carrying with it the solutes that make up the mixture that causes the extraction. 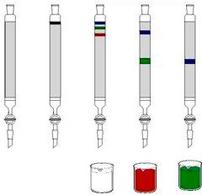 Column separation of a mix of compounds. Source: Polimi

Four chromatography techniques are obtained by the combination of the mobile and stationary phases.

Consider a two-phase system into which an analyte is introduced: it will distribute itself between the two immiscible phases, S and M, depending on its chemo-physical properties.

If CM and CS are the substance’s concentrations in the mobile and in the stationery phases respectively, and assuming that the experimental conditions are such as to reach equilibrium, it is possible, at a given temperature, to represent the distribution coefficient (K). 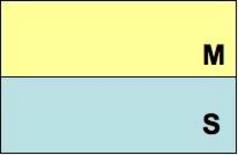 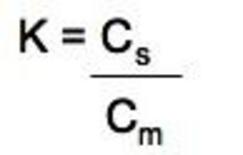 The value of K is related to the retention time, that is the time needed for an analyte to go through the entire stationary phase. A higher concentration in the stationary phase than in the mobile phase, points to a greater affinity for the former one. In other words, it will be difficult for the eluent to carry certain substances with it, while others with a greater affinity and not as close to the stationery phase, will be moved away from where they are located, and carried towards the end of the column. This way, the substances with smaller affinity for the stationery phase will be separated by those mostly retained. 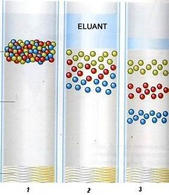 Assume you have five columns, evenly filled with a solid material in granules of homogeneous size (stationary phase). An analyte with K=1 deposits itself at the beginning of the first column, which means it is equally distributed between the stationary phase and the mobile phase. 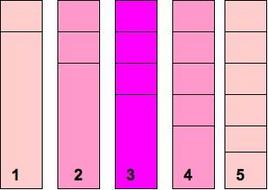 It can be observed that after five steps the compound is distributed along the whole column, with the highest concentration in the centre of the column. This type of distribution is called “Gaussian”. The greater the number of equilibriums following one another on a column, the greater the compound concentration becomes at a given point along the column. The separation is affected by two main elements:

Table shows progress of the substances in the 5 tubes during experiment. Each phase corresponds to an equilibrium.

The diagram on the right shows the pattern of the analyte studied above, with the points distributed along a Gaussian curve. The chromatogram is the diagram produced by a chromatographic analysis, which relates the response of the gas-chromotography detector to the time, i.e. the elution volume. Each peak represents the elution of the single analytes separated in the chromotographic process.

The number of theoretical plates in a chromatography column can be obtained via:

It should be pointed out that N is not a characteristic of a given column because it is related to the eluted substance. This means that if different substances flow through the same column, the column will exhibit two different theoretical plates values.

The diagram on the right shows the pattern of the analyte studied above. We note that the points are distributed along a Gaussian curve. The chromatogram is the diagram produced by a chromatographic analysis, which relates the response of the gas-chromatography detector tothe time, i.e. the elution volume. Each peak represents the elution of the single analytes separated by the chromotographic process.

Diagram of a column and theoretical plates (Elements of volume where equilibrium is reached).

The substance moves towards the end of the column through the movement of the mobile phase, in equilibrium on a plate, towards the following plate.

It should be remarked that, unlike the distillation column, the plates do not actually exist inside the column, they are only a model to clarify the process taking place.

The efficiency of a column increases with the number of plates: the greater N, the more compact the outgoing band, and the narrower the peak on the chromatogram. By increasing the plates→the peaks are narrower→better separations are obtained. The easiest way to increase the number of plates is to increase the column length, which, however, entails a remarkable increase in retention time. Alternatively, a way must be found to reduce the size of a single plate. With equal column lengths a column will be more efficient when the height equivalent to the theoretical plate is minimised.

Where L is the column lenght.

An even better formula is the following:

The stationary phase is a solid with active sites on its surface which can set up secondary links (dipole/dipole interactions, H/H links, Van der Waals forces) with the different molecules of the mixture to be separated. If the mobile phase is a liquid, the chromatography is called Liquid-Solid Chromatography (LSC); if it is a gas, Gas-Solid Chromatography (GSC). Generally speaking, the molecules that are most easily fixed are those exhibiting polar groups, even if the nature of the adsorbent also affects the phenomenon.

This is based on an ion exchange equilibrium between a resin (stationary phase), and a mobile electrolyte solution. More specifically, the stationary phase involves macromolecules containing active groups with an electric (positive or negative) charge, which can exchange their counterions (negative or positive, respectively), with the solution they come into contact with. 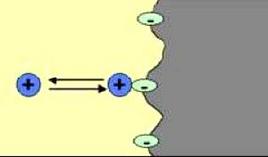 The stationary phase consists of a gel with controlled-size pores; the separation is based on the size and molecular mass of the analytes.

Reversible, very specific biochemical reactions are used, so that the molecules to be separated interact with the stationary phase. 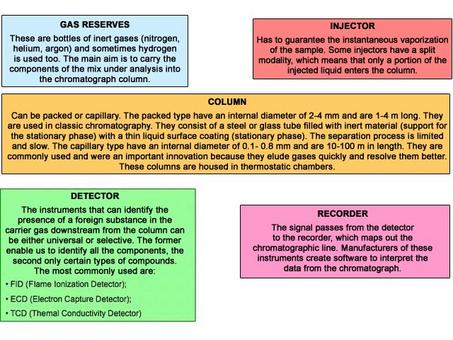 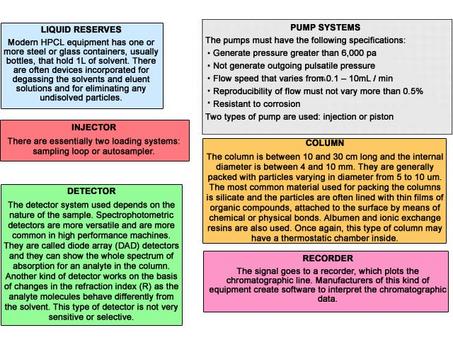 Qualitative analysis is based on information obtained from the chromatogram, which provides firm evidence of the presence or lack of analytes.

The limited information provided by a chromatogram (especially retention time) means that separation of complex samples of unknown composition is not always possible. This limitation is bypassed by interfacing chromotography columns with UV, IR or mass spectrometers.

Quantitatives analysis is based on the comparison of the heights of areas of the peaks of a compound present in a sample, with those of one or more standard ones. The area of the peak is usually a better measurement than height. As was shown in previous lessons, the most direct method in quantitative analysis is to prepare a number of standard solutions with concentrations similar to that of the sample. The chromatograms of the standards are produced and the heights or areas of the peak are reported along with the concentration. 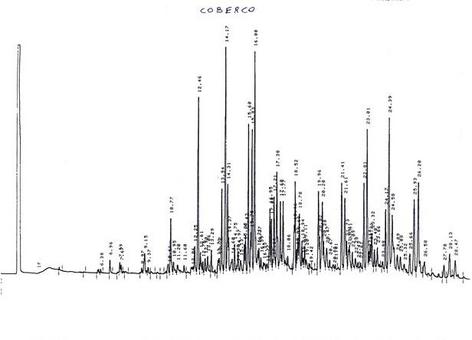 Methyl Ester Analysis of fatty acids after Transesterification of >Triglycerides

Analysing the triglyceride component is complex because of the presence of compounds with only slight chemo-physical differences. For this reason, matrixes with a mainly triglyceride composition are preferred (e.g. butter, oil, lard, etc.) for their distribution in fatty acids.

This analysis can be performed by doing a transesterification reaction on the fat or oil which breaks up the triglycerides, and frees the fatty acids they contain.

Virgin oils are only those extracted from olives by pressure or centrifugation processes (mechanical and physical means), and excludes those where solvents,  chemical or biochemical adjuvants, reesterification processes are used as well as those mixed with non-olive oils. Virgin oils are divided into four varieties according to their acidity:

Analytical Food Chemistry aims at identifying the principle nutrients in a food and their amounts. It also enables us to find out whether the foods meet health and authenticity requirements prescribed by law, as well as to identify any alterations and adulterations (frauds) in the foods. “Food frauds” is a general phrase referring to the production and sale of foods which do not comply with current legislation. Food fraud is divided into several categories:

The most frequent olive oil frauds

Gas chromatography of fatty acids (like Methyl Esters) produces a chromatogram with clear peaks for all the fatty acids, including those present in trace amounts or with different isomers (cis-isomers can be distinguished from trans-isomers). Special capillary columns can also produce a chromatogram showing the peak typical of elaidinic acid that indicates an olive oil that has not been pressed and probably comes from esterefied olive oils, rectified olive oils or rectified olive-pomace oils.

By a process of transesterification, the fatty acids of glycerides present in the olive oil are transformed into their respective methyl esters, which exhibit greater volatility compared to simple triglyceride. 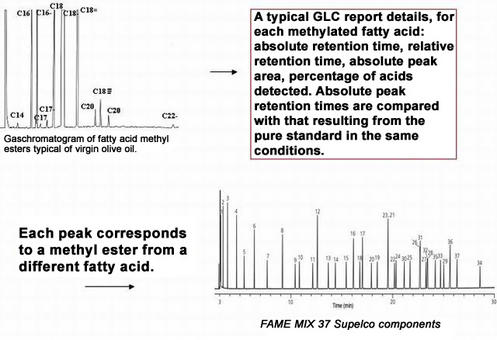 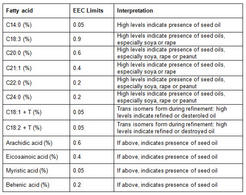 The quality of oil can be checked by comparing percentages of methylated fatty acids.