Gravimetric methods are based on weighing the mass using analytical scales, an instrument which gives a more precise, accurate reading than any other procedure or analytical technique. Methods which can be combined with this type of measurement are esentially of two types:

How to use analytical scales and what precautions to take

Gravimetric analysis means using the special laboratory scales to find out the gross weight (sample + tare) and the tare weight. It is very important to know how to use the scales correctly, and not to think that it is “simple”. We should remember, once again, that weighing is the starting point in analytical chemistry for all other operations and so it is obviously vital not to let error creep in at this stage. To use the scales you should do as follows:

Precipitation procedure for ions in solution

The reactions used in gravimetric analysis are those which produce barely soluble salts. In chemistry, the term solubility refers to the maximum quantity of solute that can dissolve in a given solvent, and it depends on the chemical structure of the two compounds as well as the temperature. We can proceed as shown in the diagram below: A gravimetric precipitation agent needs to react in a specific way with an analyte. It also needs to:

Not all these conditions are always true. Solubility depends on → Reduction or increase in temperture

Ease of filtration is proportional to the dimension of the particles. In gravimetric analysis, we usually prefer precipitates whose particles are larger because they are purer, easier to filter and also easier to wash. The size of the particles depends on the individual experiment. At one end of the spectrum are colloidal suspensions that show no inclination to precipitate and so are difficult to filter. At the other end there are the particles of crystalline suspensions that tend to form deposits spontaneously. To encourage crystallization of the precipitate, or to increase the size of the crystals, we often resort to digestion. This operation involves keeping the precipitate warm for a certain period time. This increases the solubility of precipitate, so the smaller particles dissolve in the solution. The resulting ions tend to attach to the crystal that have already formed. In this way the precipitate becomes purer. Particle size can be affected by different variables in the experiment like:

Q: molar concentration (moles/L) after the addition of the solvents;

In practice, supersaturation influences one of the mechanisms of precipitation, namely nucleation and crystal growth. Nucleation is the first stage of precipitation and consists in the formation of stable microcrystals that can grow spontaneously, i.e. crystallization nuclei. Further precipitation leads to competition between new and existing nuclei (particle growth). If nucleation predominates, then a crystal will form that is easy to filter. Low supersaturation encourages the growth of existing microcrystals rather than the formation of new nuclei. Higher temperatures also favour the formation of crystalline precipitates, because they increase the solubility of the precipitate (S), and other factors that encourage crystal growth are diluting the solution (Q), and adding the precipitation agent slowly while shaking energetically.

Co-precipitation means that normally-soluble compounds are removed from the solution as the precipitate forms. There are four types of co-precipitation:

After precipitation, the precipitate needs rinsing, drying and calcifying. The choice of liquid for rinsing depends on reducing the risk of adsorption, occlusion and inclusion. Rinsing is usually done using ammonium salt solutions because even though they remain in the precipitate as contaminants, they can be easily eliminated during the following steps of the process because they are volatile. After rinsing, the precipitate is dried, i.e. treated at 100-150°C, to get rid of any last traces of humidity and to make sure that, if calcination is necessary afterwards, none of the precipitate is lost during the process due to microexplosions from the vaporization of occluded water.

Calcination takes place in a muffle at max. temeperatures of 475-525°C.

Determination of amount of analyte present based on gravimetric results The most common gravimetric method based on volatilization is used for ethanol in wine.

Determining the alcohol level is done by distilling the wine and working out the specific weight (using hydrostatic scales) of the resulting hydroalcoholic solution. Special tables (Reichard tables) then enable us to look up the corresponding alcoholic level. The more alcoholic the wine is, the lower the specific weight of the distilled liquid will be. This method is officially accepted and is used to work out the strength of beers and spirits.

It must be stressed that the result obtained is usually slightly higher than the real level of the alcohol concentration per volume, because other volatile alcohol substances are distilled along with ethanol. The distilled liquid is collected and then weighed using hydrostatic scales. The weight should then be checked on the Reichard table to find out the alcoholic level of the drink. 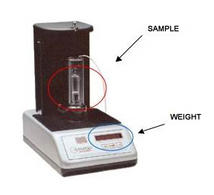 First of all, a suitable container needs to be tared in a heater at 105°C. This means leaving the container in the oven for at least half an hour. After being cooled in a dessicator, the container is weighed and then reweighed. The result can be considered satisfactory when the difference between two successive readings is less than 3 decimilligrammes.

At this point, the sample can be weighed (flour, semolina, butter, etc.) and the procedure is the same, reweighing until the difference in weight between two consecutive readings is no more than 0.3 milligrammes.

The amount of water in the sample is thus the difference between the second weight and the tare; in general, it is recorded as a percentage (p/p) of the product analysed. Determination of water in solid foods

N.B. The dish and sample need to be handled using pincers or tampons so they are not contaminated with grease from our hands.

Imagine that we weighed about 5.2352 g. of peaches, and that the stabilized empty crucible weighs 25.600 g.. At the end of the drying process, the weight of the crucible plus the sample was 26.3825 g.. Calculate the absolute humidity and the humiduty content of the sample.