A major part of modern Instrumental Analytical Chemistry, focuses on the study of the energy exchange between electromagnetic radiation and matter. These interactions are visible to the naked eye, when the radiations concerned fall within the visible spectrum.

The nature of electromagnetic radiation

Frequency→ ν → is the number of vibrations per unit time. It is measured in Hertz (Hz).

Period → T → is the time needed to perform a complete oscillation. It is the reciprocal of the frequency and is measured in seconds.

Wavelength→ λ → is the distance between two points of the same phase. It is measured in Å.

Electromagnetic radiation consists of ‘discrete packets’ of energy called Photons,whose energy is related to the frequency via the equation:

Several types of electromagnetic radiation exist, which differ in wavelength and, consequently, frequency and energy.

A single colour radiation obtained through dispersion, characterised by a specific wavelength is called monochromatic. 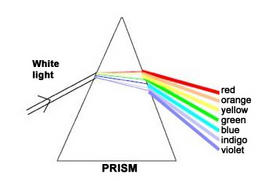 Spectrochemical methods of analysis are based on analysis of the spectrum of substances, which can be an emission or absorption spectrum.

In energy fields (electric or electromagnetic heaters), atoms or molecules can absorb specific amounts of energy and move up to higher energy states. This phenomenon is called absorption. 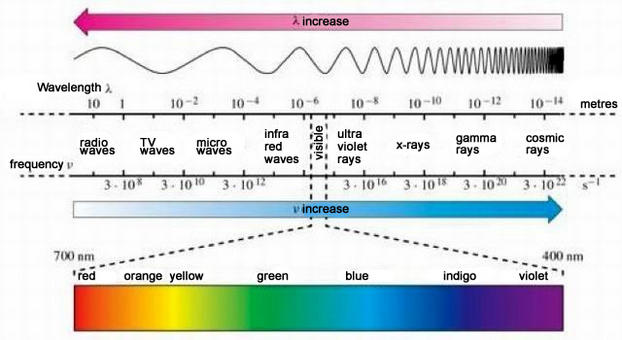 Qualitative analysis is performed using polychromatic beams, which are broken up into their various components (monochromatic radiations) by means of monochromators. One by one, the single monochromatic radiations of the beam are passed through the substance under examination, which will absorb the different radiations with differing intensities. The values recorded, reported on a wavelength-absorption diagram, produce the absorption spectrum of the substance examined.

It uses monochromatic beams. Quantitative analysis is based on the fact that when radiation passes through a solution, it is absorbed with a greater or lesser intensity, depending on the concentration. As will be shown later, special  devices (detectors) can measure the intensity of the luminous flux; in particular the analysis measures:
I0: intensity of the luminous flux at the entrance of the cell containing the sample

I: intensity of the luminous flux at the exit of the cell containing the sample.

If we take a cell containing a substance in solution, which is crossed by a beam of monochromatic light, it can be demonstrated that:

The proportional relationship between absorbance and concentration makes it possible to perform quantitative analysis. The equation A = ε x b x C represents a straight line passing through the origin of the axes and where ε x b is the angle coefficient. 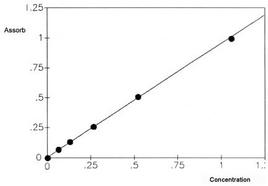 Preparation of diluted standard solutions of the analyte to be quantified, and construction of the calibration curve indicating concentration on the x axis and absorbance on the y axis. The latter is read at the wavelength corresponding to the maximum absorption of the analyte.

Flowchart of a spectrophotometer 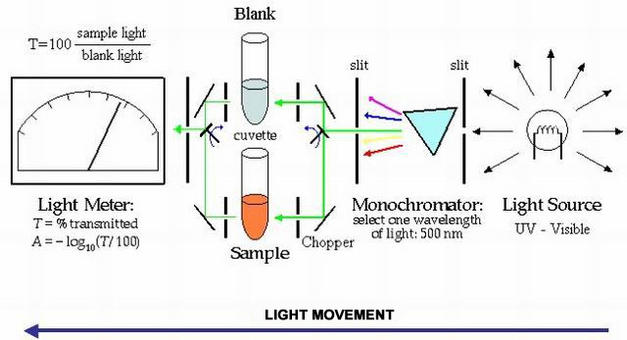 Flowchart of a spectrophotometer (cont.) 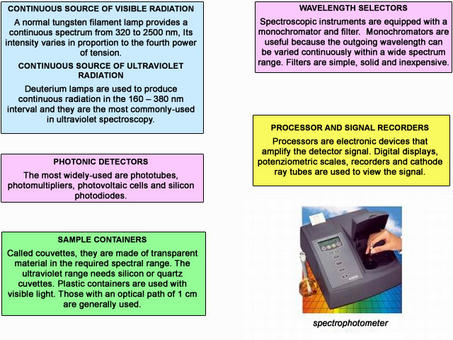 Analysis of polyphenols in wine

Total polyphenol content is considered a crucial piece of information in the quality control of musts and wines. Wines contain several types of phenol compounds. To assess their content, the ideal procedure would be to dose each one separately – which is not always possible, despite the sophisticated techniques available, since the results are not always replicable and are difficult to interpret. Therefore, an overall assessment of the polyphenol content is performed, using its reducing and UV absorbing properties. To quantify the content, a specific reagent is used called Folin-Ciocalteau reagent, which is a mixture of phosphotungstic acid (H3PW12O40) and phosphomolybdic acid (H3PMo12O40). In a base environment, and in the presence of polyphenols, the two acids produce blue-coloured tungsten and molybdenum oxides (W8O23 e Mo8O23), whose maximum absorption is of about 775 nm. The intensity of the colour is proportional to the concentration of reagent reduced by the polyphenols, which oxidise instead.

Carrying out the analysis 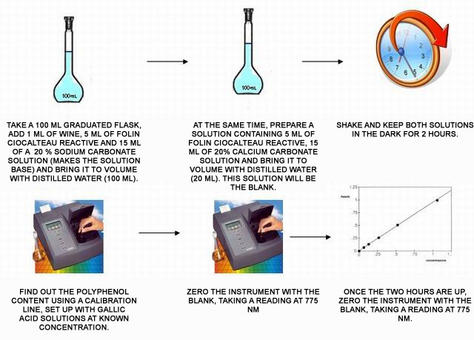