Inorganic semiquantitative analysis usually refers to a systematic procedure using specific chemical reactions to confirm whether certain ions or other elements are present and, approximately, in what concentrations. This is achieved by adding a reactive to the solution under analysis that changes its chemical/physical properties, leading to colour change or the formation of a precipitate. The reactives can be:

Example: Imagine we want to determine the presence of Cl- (chloride ions) in water. If we add AgNO3 (silver nitrate), it makes the Cl- ions precipitate to form a precipitate of silver chloride (AgCl). The reaction is selective in that the silver nitrate can also react with other anions like Br- (bromide ions) and l-;

Nitrogen may be present in surface water in its organic form or as ammonia, nitrous or nitric forms. These substances are not particularly toxic in terms of the natural cycle but if the water is destined for human consumption it is important that the level of these substances remains within certain limits. Apart from nitrogen dioxide, in fact, the presence of these substances definitely indicates a process of organic decay and therefore a degree of pollution. Ammonium, nitrous and nitric forms of nitrogen represent the final stage of the decomposition process of animal and plant nitrogens:
Proteins →amminoacids →ammoniac → nitrogen dioxide (NO2-) → nitrate (NO3-). The nitrites (nitrous nitrogen) are intermediate phases in the nitrogen cycle. They are normally the product of ammonia oxidation during the biodegradation process; but occasionally they may result from nitrate reduction. Nitrites are easily and quickly transformed into nitrates, even trace amounts of nitrogen dioxide in water indicates decomposition in progress. Nitrites can also find their way into surface water in factory waste from certain industries which use nitrates as inhibitors to prevent corrosion. 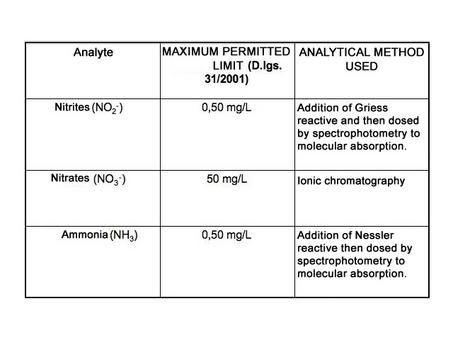 The Peter Griess reactive is a specific reactive used to look for nitrogen dioxide (NO2) in water. The nitrate ions react with the Griess reactive in an acid environment. Griess reactive, sometimes referred to as “GRIESS A” and “GRIESS B”, is made from a mix of sulfanilic acid (or sulfanilamide) and N-(1-naphtil)-ethylenediamine. Griess reactive can be bought ready-made these days and contains all the substances necessary to reveal the presence of nitrite ions. This is the officially recommended method for testing for nitrites in drinking water. The test is extremely sensitive and so even a semiquantitative analysis (compared to standard) is enough to establish whether the water is suitable for drinking. If the colour change is minimal, however, this kind of comparative analysis may not be reliable enough and we would need to do spectrophotometric analysis as well.

In an acid environment, sulfanilamide is dinitrogenised by the nitrite atoms

After this, the dinitrogen compound bonds with the N-(1-naphtil)-ethylenediamine to form a strongly-bonded molecule with maximun absorption of around 520 nm.

This can be carried out using the special kit or by preparing a series of solutions at different known concentrations of nitrates and adding exactly the same amount of Griess reactive. When using the kit, the reactive that is included is added directly to the water sample and the water changes colour; the more intense the colour, the higher the concentration of analyte. Interpreting the colour is easy and quick, even on site, using the special colour chart which indicates the corresponding concentration values. When using the second method, the solutions themselves provide the colour scale for interpreting the results because they can be compared with the water sample, where exactly the same amount of Griess reactive has been added. 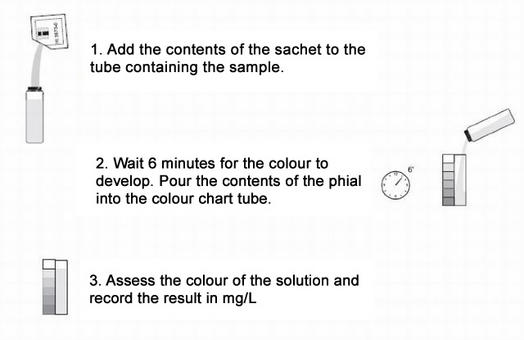 Comparing the colour of the sample with the colorimetric chart. Source: hanna.it

The main limitation where semiquantitative analysis is concerned is the inherent subjectivity of the result, as it is the human eye that acts as the measure. Mistakes can obviously occur because of physical defects (Daltonism), or through tiredness, or simply because the two shades are not compared precisely. A further, more significant, limit to this test is that it cannot be used beyond a certain concentration because the colour differences are not visible to the human eye. The introduction of spectrophotometry solved both of these problems. It is easy to deduce that semiquantitative analysis proves the presence of a specific analyte,  and enables us to work out its approximate concentration. Often, however, the law requires the use of more precise analytical methods that enable us to work out the exact concentrations of the molecule in question.

Moderm methods are instrumental, and as we have seen in previous lessons, involve the measurament of a physical property (e.g. light absorption or emission, conductability, current) or a chemical property (oxidability or reducibility) depending on the analyte.

Nowadays, nitrites are always determined using spectrophotometry with Griess reactive. The NO2- ions react with the Griess reactive to form a nitrogen compound with many bonds and so absorbs the visible,  and presents with a max absorption of 540 nm.

The method can be used with natural water, sea water included, and with waste water at concentrations of 0.001-0.2 mg/l of No2-. Higher concentrations of nitrogen dioxides are determined by diluting the sample.

The presence of ammonia in water can be read as a sign of recent contamination, since ammonia is one of the by-products of the decomposition of the proteins in living organisms as we saw before. It is an indication of agricultural (from nitrogen fertilisers) and industrial pollution that causes a reduction in the amount of oxygen dissolved in water. The ammonium nitrate results from the breakdown of organic nitrogen compound (like urea), and its presence indicates non-treated sewage.

When water is well-oxygenated there is no ammonium nitrate, or it is present in only trace amounts because it is so quickly oxidized into nitric nitrogen.

Nessler reactive or Nessler solution is a reactive which enables us to determine precise amounts and concentrations of ammonia, if it is present as ammonium ions in solution. The reaction was perfected by J Nessler in 1856.

and turns a bright yellow-orange colour because of mercury amido oxide iodide which, with time, if the concentration is high enough, flocculates and precipitates.

It is a very sensitive reaction that enables us to detect the presence of even really low concentrations of ammonia like 0.1 mg/l (0.1 ppm).

Here once again, the analysis is carried out using either the kit or a series of ammonia solutions at different known concentrations and adding exactly the same amount of Nessler reactive to them.

As with nitrites, quantitative analysis of ammonium ions can be done using spectrophotometric analysis because we know that mercury amido oxide iodide has a maximum absorption of 420 nm.