Analytical methods and procedures in Analytical Chemistry and Instrumental Analytical Chemistry enable us to obtain a numerical result which is reported at the end of the analysis of a particular sample. This must be legible, and must contain all the information relative to the analysis carried out. The analytical result is as important as all the other operations involved in the method, and thus must be accurately recorded. Statistical analysis of experimental data dictates the guidelines for the treatment of experimental data, and indicates the way in which the final result of the analysis is expressed.

Analytical result: a number which expresses the quantity of a substance found in an unknown matrix. This is obtained by the application of statistical analysis.

Reliability: the correspondance between the experimental result and “true” value. This is influenced by factors depending on the method, execution and efficiency of the instrumentation.

Factors affecting reliability of a result

Definition: the difference between “true” value and the result of analysis.

These may be eliminated since they go in a single direction (upwards or downwards).

Statistical Analysis is a branch of mathematics applied to the study of data drawn from a variety of sources: experimental measurements, demographic phenomena, meteorological forecasting, etc.

A series of experimental results can be grouped in a certain number of classes to study their development.

Class: comprises a series of result in a predetermined interval known as Extent of class.

Frequency of class: is the number of results grouped in classes.

Histogram: a graph recording the frequency compared to extent of classes.

Gaussian Curve: is obtained by carrying out infinite determinations. It is easily demonstrable that, for experimental measurements, which are not a random phenomenon like the throw of a die, the histogram obtained for an increasing number of measurements tends to approximate to a bell shape which is typical of the Gaussian Curve.

Principal characteristics of the Gaussian Curve

The characteristics of the Gaussian curve assure us above all that it is possible to give a result ahead of a series of experimental measurements, and this is guaranteed by the bell shape with its highest point precisely in the proximity of the average (mean) value. In addition, it can be deduced from the curve that it is possible to minimize only indeterminate errors, while the complete removal of error is for an infinite number of measurements. 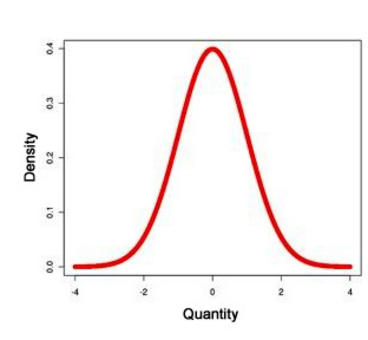 Average: if the experimental results have equal statistical weight, the average value of, or arithmetical average is more probable than each result.

It is demonstrated that the average N value, where each is measured equally accurately,  is √N times more probable than any single measurement. This is the perfectly mathematical reason why the average of a set of experimental results is reported, and not one single value.
True standard deviation (o): the distance between each of two points of infliction and the average value x. The smaller the value, the greater the precision of the measurement.

Variance: is the sum of the squares of single variances of the average divided by N, when the number of measurement is infinite, divided by N-1 in other cases.

Standard Deviation: for an infinite number of measurements:

Estimated standard deviation: for a finite number of measurements:

Mean deviation: is the arithmetic mean of a difference, in absolute values, between single values and the average (mean).

di= lxi-xl
The mean deviation is an estimate of the dispersion of values which is less efficient than the standard deviation of a single measurement S.

Method of 4∂ for discarding a questionable result

Absolute Error: difference between the experimental and the “true” result.

Significant numbers and rounding off

Are the numbers necessary to express the result of a measurament, with the same degree of accuracy with which it has been carried out. Only the final figure in a result may be in doubt. When the last figure of a result is in doubt, and its elimination would result in lowered accuracy, this figure is reported in brackets.

A set of experimental data can be recorded in the following ways:

The information of experimental data reported as a graph is greater compared to that reported in a table. From observation of a graph, the relation between the dependent and independent variable is immediately evident.