Definition of aquaculture
Aquaculture for food production is similar to other forms of animal husbandry, the animals are cared for, protected and fed with the intention of increasing their quantity and value. The holding and farming of fish also reduces the effort otherwise required to locate and capture supplies from wild stocks. Fish farming has boosted consumer confidence in product quality while helping to ensure more orderly and timely harvesting/distribution of fresh seafood products.

Aquaculture methods
Aquaculture takes a variety of forms: in natural settings or tanks, in fresh water or sea water, in flow-through or recirculation systems, traditional or modern, classic or organic, sheltered or exposed, and so on.
The fish farm is basically used for raising a large variety of fish, shellfish and aquatic plants. Today, fish farming is carried out on a large scale, thus offering an alternative solution to meet the increasing market demand for fish and fish protein.
Fish farming techniques for feeding fish depend on the species of fish being raised.
Some fish require vegetation, some require zooplankton and others will only eat smaller fish. In a polyculture operation, where multiple species of aquatic life are raised in the same body of water, a balance must be found that will prevent one species, or one type of food, from overtaking the growing environment.
Increasing demands on wild fisheries by commercial fishing has caused widespread overfishing.
Fish farming offers an alternative solution to the increasing market demand for fish and fish protein.

Extensive fish farming
The earliest form of aquaculture practiced consisted of trapping wild aquatic animals in lagoons, ponds or small shallow lakes, so that they would be available at all times. This method dates back to the Neolithic age, when man started to act on natural resources.
Extensive fish farming includes holding the fish in their native habitat with dependence on natural productivity and little control over the stocks.

Intensive fish farming
Intensive fish farming includes containment of fish in ponds or tanks where the fish farmer provides them with all their nutrition.
This system involves the adoption of full complement of culture techniques including scientific pond design, fertilization, supplemental feeding or only feeding without fertilization; full measure of stock manipulation, disease control, scientific harvesting, high level inputs and high rate of production.

Fish farming cages
The working principle of this technique of breeding is quite simple: a cage with a rigid structure, more or less flexible (in iron, plastic, rubber or other) it is supported on the surface by special floats in case of a floating cage or in case of a submersible or submerged cage, immersed in midwater or moored on the seabed.
Cages, either floating or, submersible or submerged, are certainly an efficient alternative to other types of farming such as cement or earth made tanks.
These facilities do not need pumping, heating or water filtering; fishes can live in their habitat, while remaining in a bounded area.
It is possible have higher production per cubic meter, thanks to the unlimited water bringing. 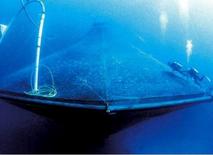 Example of submerged cage. From: Food and water watch 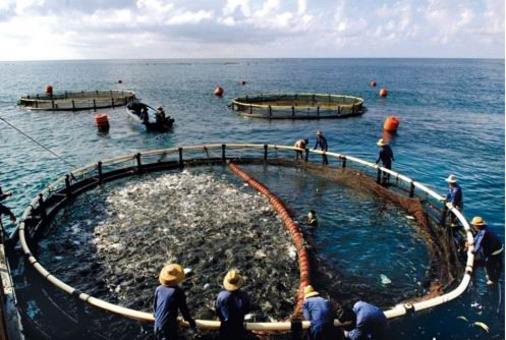 Fish cages are placed in lakes, bayous, ponds, rivers or oceans to contain and protect fish until they can be harvested. They can be constructed of a wide variety of components. Fish are stocked in cages, artificially fed, and harvested when they reach market size. A few advantages of fish farming with cages are that many types of waters can be used (rivers, lakes, filled quarries, etc.), many types of fish can be raised, and fish farming can co-exist with sport fishing and other water uses. Cage farming of fishes in open seas is also gaining popularity. Concerns of disease, poaching, poor water quality, etc., lead some to believe that in general, pond systems are easier to manage and simpler to start. Also, past occurrences of cage-failures leading to escapes, have raised concern regarding the culture of non-native fish species in open-water cages. Even though the cage-industry has made numerous technological advances in cage construction in recent years, the concern for escapes remains valid. The advantages of the farming in cages are:

Raceways
Raceways are narrow streams that flow between two wall type structures in farms. The raceways are constructed to divert water from streams or well into the water channels that contain fish. The main disadvantage of this technique is that the fish can easily escape from the raceways and enter the natural waterways.

Shellfish farming
Shellfish farming is still an extensive type of aquaculture. It is based primarily on specimens born in the wild and on nutriments provided by the environment, without any type of input.

Fish and shellfish are excellent source of easily digestible protein of high nutritional value. Tests have shown that 85% to 95% of the protein is assimilable. The composition of fish may vary considerably, especially in their fat content, during certain growth periods and annual spawning or migration periods. In addition, the composition of fish bred in captivity (aquaculture fish) may vary according to their artificial diet.

Proteins
Fish provides a good source of high-quality protein. In fish, as well as in shell fish, a very large proportion of the food substances present is protein. This proportion varies with the quantity of water, bone, and refuse that the particular food contains, and with the physical structure of the food. In fresh fish, the percentage of this material varies from 6 to 17 per cent.
The structure of fish is very similar to that of meat, as the flesh is composed of tiny hollow fibers containing extractives, in which are dissolved mineral salts and various other materials.
Fish and shell-fish contain protein that is similar in amino acid composition to that found in muscle meats. Mollusks are generally lower in protein compared with finfish and crustaceans because of their high water content. The proteins found in fish are essentially the same as those found in the meat derived from other animals, that is, the sarcoplasmic proteins (e.g., enzymes and myoglobin), the contractile or myofibrillar proteins (e.g., actin and myosin), and the connective tissue proteins (i.e., collagen).
In general, collagen fibrils form a delicate network structure with varying complexity in the different connective tissues in a pattern similar to that found in mammals. However, the collagen in fish is much more thermolabile and contains fewer but more labile cross-links than collagen from warm-blooded vertebrates. The hydroxyprolin content is in general lower in fish than in mammals, although a total variation between 4.7 and 10 % of the collagen has been observed.

Fat
Fish lipids differ from mammalian lipids. The main difference is that fish lipids include up to 40% of long-chain fatty acids (14-22 carbon atoms) which are highly unsaturated. Mammalian fat will rarely contain more than two double bonds per fatty acid molecule while the depot fats of fish contain several fatty acids with five or six double bonds. The percentage of polyunsaturated fatty acids with four, five or six double bonds is slightly lower in the polyunsaturated fatty acids of lipids from freshwater fish (approximately 70 %) than in the corresponding lipids from marine fish (approximately 88 %). However, the composition of the lipids is not completely fixed but can vary with the feed intake and season.
The fat in fish is mostly liquid, because it contains a relatively low percentage of saturated fatty acids.
Fish and shellfish have high levels of Omega-3 fatty acids [eicosapentaenoic acid (EPA) and docosahexaenoic acid (DHA)], which tend to lower blood cholesterol by depressing low density lipoprotein (LDL) concentration. Omega-3 fatty acids appear to also reduce levels of plasma triglyceride, in particular very low density lipoprotein (VLDL).
The percentage of fat in fish varies from less than 1 per cent in some cases to a trifle more than 14 per cent in others, but this high percentage is rare, as the average fish probably does not exceed from 3 to 6 or 7 per cent of fat. This variation affects the total food value proportionately.

Carbohydrate
Like meat, fish does not contain carbohydrate in any appreciable quantity. In fact, the small amount that is found in the tissue, and that compares to the glycogen found in animal tissues, is not present in sufficient quantities to merit consideration.

Vitamins
Fish is a good source of the fat-soluble vitamins A, D, E, and K and the B vitamins riboflavin, niacin, and thiamine.
The vitamin content is comparable to that of mammals except in the case of the A and D vitamins which are found in large amounts in the meat of fatty species and in abundance in the liver of species such as cod and halibut.

Minerals
In fish, mineral matter is quite as prevalent as in meat. Fish is a satisfactory source of phosphorus, magnesium, iron and copper. Shellfish and salt-water fish are rich in iodine and fluorine, in addition to appreciable traces of cobalt, and for that reason make a valuable contribution the diet. Herring and oysters are exceptionally high in zinc. As for minerals, fish meat is regarded as a valuable source of calcium but also of selenium.

Chemical composition
The chemical composition of fish varies greatly from one species and one individual to another depending on age, sex, environment and season.
The white muscle of a typical lean fish such as cod contains less than 1 % lipids. Of this, the phospholipids make up about 90 %.
Fish species may be categorized as lean or fatty depending on how they store lipids for energy. Lean fish use the liver as their energy depot, and the fatty species store lipids in fat cells througout the body. 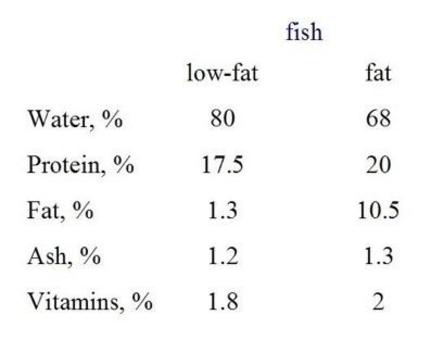 Differences between 'low-fat' and 'fat' fish.

Comparison of fish with meat
In general, the composition of fish is similar to that of meat, both of them are high-protein foods. However, some varieties of fish contain large quantities of fat and others contain very little of this substance, so the food value of the different kinds varies greatly. As in the case of meat, fish is lacking in carbohydrate. Because of the close similarity between these two foods, fish is a very desirable substitute for meat. 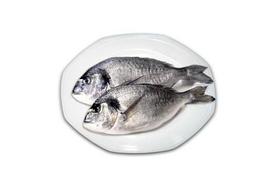 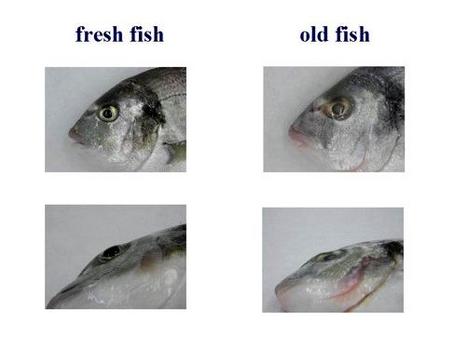 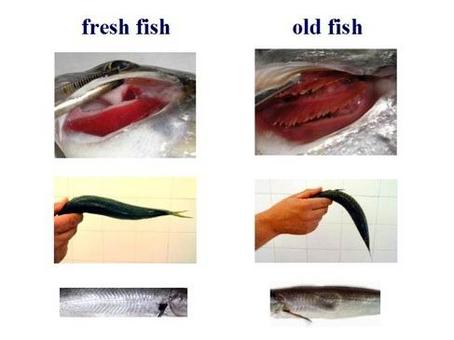