The greatest advantage of artificial insemination (AI) is that it makes possible maximum use of superior sires. Natural service would probably limit the use of one bull to less than 100 matings per year. With AI, a bull can produce 200–400 units of semen per ejaculate, four times per week.
Diseases usually transferred during servicing can be prevented, while the transfer of infectious diseases like tuberculosis and venereal diseases can also be prevented because bulls that could possibly transfer these diseases are not used.
Semen from the best bulls in the world can be used in a herd.
Other advantages include early detection of infertile bulls, use of old or crippled bulls and elimination of danger from handling unruly bulls.

There are a few disadvantages of AI which can be overcome through proper management.
A human detection of heat is required. Success or failure of AI depends on how well this task is performed.
AI requires more labor, facilities and managerial skill than natural service.
Proper implementation of AI requires special training, skill and practice.
Utilization of few sires, as occurs with AI, can reduce the genetic base. The AI industry and dairy cattle breeders should make every effort to sample as many young sires as possible.

Collection, extension and storage of semen
One obvious factor which determines degree of success of AI is the quality of the semen used. Much has been learned about factors affecting semen quality and methods of evaluation and means of maintaining quality through lengthy storage.

Collection of semen
Several methods of obtaining semen have been developed.
The artificial vagina method is most widely used today for the collection of bull semen. The bull is allowed to mount a teaser cow and ejaculates when the penis is directed into the artificial vagina.
The artificial vagina consists of a firm cylindrical tube with a thin-walled rubber lining. The jacket formed is filled with warm water. A rubber funnel connected to a collection receptacle is attached to one end of the cylinder. When the jacket is properly filled and the artificial vagina lubricated and properly applied, this method of semen collection is highly successful.
Cleanliness must be practiced to avoid contamination and deterioration of semen quality. Proper and careful treatment of the bull is essential to bring about adequate precollection stimulation which will increase quantity and quality of semen obtained. 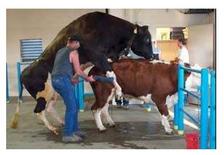 Obviously the collection of semen from a bull is a specialized skill and should be attempted only by those with the proper equipment, training and experience. Adequate facilities for controlling the bull and teaser animal must be maintained so that danger of injury to personnel as well as the animals is minimized.
Semen can also be collected by using an electroejaculator placed into the animal’s rectum. An electrical stimulation causes the ejaculation.
If semen is collected too frequently, the number in each sperm ejaculate decreases.

After collection, semen analysis is divided into two parts:

Volume – This is a parameter that depends on the function of the semen vesicle and sex glands, plus other factors such as age, species, training, etc., and varies from 1 to 8 ml. Most bulls provide about 6 ml of ejaculate.

Colour – This depends on the amount of spermatozoa. When the semen is of good quality, it has a milky or creamy white colour and is of poor quality when its colour is similar to watered milk. If the ejaculate is yellow, it may be contaminated with urine and, if pink, there may be the presence of blood.

Odour – In good condition, semen has a smell similar to fresh milk. The smell of urine indicates that the semen is contaminated with it. If the smell is unpleasant, some kind of disease is suspected in the testicles or elsewhere in the reproductive tract.

Appearance – Its opacity, which depends on the concentration of spermatozoa, is assessed.

pH – Is determined using a paper strip between the range 6.4 to 6.9. Values above 6.9 are indicative of low semen quality.

Masal motility – Is determined by placing a drop of semen on a slide, and then observing it under a bright field microscope with little magnification. The presence of waves and eddies throughout the whole drop is evaluated as below:

Individual motility - This parameter can be analysed more objectively with automated systems. However, it is also determined by bright field microscope examination by placing the slide on a drop of semen diluted with saline or sodium citrate (0.9%). A coverslip is then placed over it and observation performed under a bright field microscope with maximum magnification. The semen is classified according to the type of movement of the individual sperm, as follows. 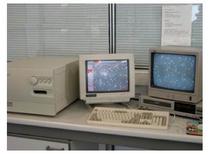 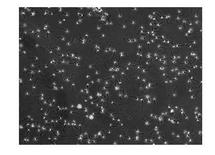 Visualization of the sperm motility.

Concentration
This is the number of spermatozoa per ml, and is calculated by counting the sperm, with respect to the dilution and volume, in a counting chamber (Burcker or similar) under a bright field microscope.
Another way to determine this semen parameter is by examination with an automatic system.

Acrosomic and morphological abnormalities
The abnormalities observed are classified as primary or secondary.
Primary malformations are, by definition, those that originate within the testes during spermatogenesis and secondary malformations are those that originate within the epididymis.
In general, the maximum number of head abnormalities allowed in the ejaculate is between 15 and 20 %. Acrosome and tail abnormalities are acceptable up to 25 %.
In no case should less than 70 % of normal spermatozoa in the ejaculate of a breeding bull be accepted. 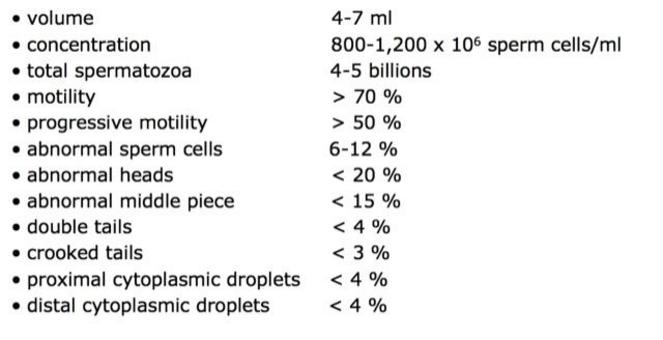 Semen extension
The main reason for extending (diluting) semen is to increase the number of females serviced from one ejaculation. A normal ejaculate from a dairy bull will contain 5 to 10 billion sperm which can be used to inseminate 300 to 1,000 cows if fully extended.
There are several good semen extenders. Those made from egg yolk or pasteurized, homogenized milk are two of the most widely used.
A good extender not only adds volume to the ejaculate but favors sperm survival and longevity. Penicillin and streptomycin are added to semen extenders. These antibiotics inhibit bacterial growth and reduce the danger of spreading diseases such as vibriosis.

Dilution
Once the sperm concentration is determined, the amount of diluent or extender that can be added to the semen and the number of straws that can be made are calculated.
The number of spermatozoa per straw (dose) is usually 20 million.

Formula used to calculate the number of doses.

Fresh, liquid semen can be successfully stored for 1 to 4 days at 4-5 °C.
Frozen semen can be stored indefinitely if the proper temperature is maintained.
The addition of glycerol (6-7%) to the semen extender improves resistance of sperm to freezing. Glycerol acts to remove water from the sperm cell prior to freezing and prevents the formation of cellular ice crystals which would damage the sperm.
The semen can be stored in liquid nitrogen (-196 °C) because there is no evidence of fertility deterioration with age.
Complete identification of the bull is required on each individual semen container.

The technique of inseminating a cow is a skill requiring adequate knowledge, experience and patience. Improper AI techniques can negate all other efforts to obtain conception. Semen must be deposited within the tract of the cow at the best location and at the best time to obtain acceptable conception rates.

Rectovaginal technique
In the rectovaginal technique a sterile, disposable catheter containing the thawed semen is inserted into the vagina and then guided into the cervix by means of a gloved hand in the rectum. The inseminating catheter is passed through the spiral folds of the cow’s cervix into the uterus.
The body of the uterus is short; therefore, care should be taken not to penetrate too deeply which might cause physical injury.
The rectovaginal technique is more difficult to learn and practice is essential for acceptable proficiency but the advantages make this method of insemination more desirable than other known methods. With practice, the skillful technician soon learns to thread the cervix over the catheter with ease. If disposable catheters are used and proper sanitation measures are followed, there is little chance of infection being carried from one cow to another.

Speculum method
This method is easily learned, but proper cleaning and sterilizing of the equipment is necessary, making it more impractical to inseminate than with the rectovaginal technique which is the most widely used AI method today.

Insemination
The straw is put in water with a temperature of 32-35 °C. It is then dried and put inside the pistolette. The end of the straw is cut off. The sheath is put over the pistolette. In order to avoid infection, the front end of the sheath should not be touched.
The AI glove is then put on and a lubricant is put on the hand. The hand is then inserted into the rectum of the cow and the pistolette is carefully put inside the female genital tract.
The pistolette is carefully pushed through the cervix and the semen is deposited into the uterus. 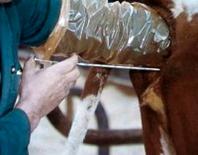 Insemination procedure. From: Partners in Reproduction 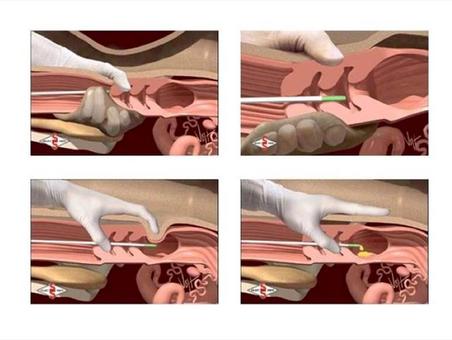 Focus on the semen deposition in the uterine horn. From Infovets