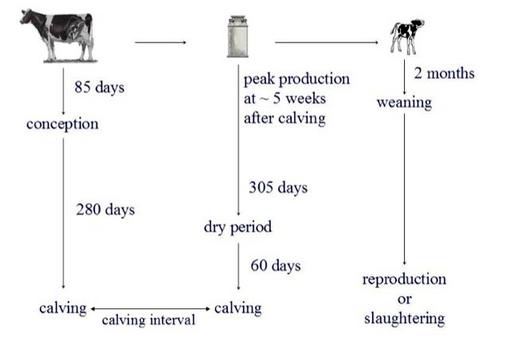 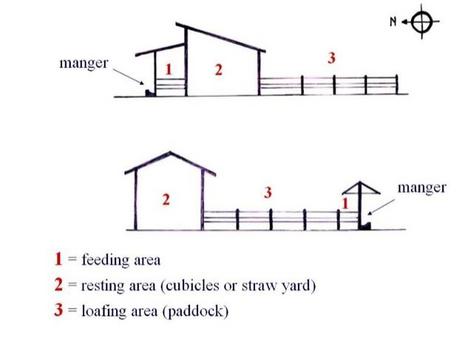 Lying down is a very high priority among cattle. Dairy cows prefer to lie down when ruminating. A cow normally lies down for 10 to 14 hours per day spread out over 15 to 20 periods. A lying period typically lasts from half an hour to three hours.
There are two main options available for housing dairy cows:

Cubicles
Cubicles must provide a demarcated, comfortable and sheltered resting place. The design of cubicles should provide a clean, dry and deformable bed as well as making sure that it is easy for the cow to lie down and get up again. Cubicles consist of a resting area and an unobstructed opening towards the front of the cubicle for the cow to thrust her head through when she rises and lies down.

Straw yard system
Straw yards are usually divided into a straw-covered area where the cows can lie down and an unbedded, concrete loafing and feeding area. The resting area should be topped-up with clean, dry straw on a daily basis. 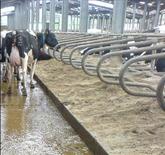 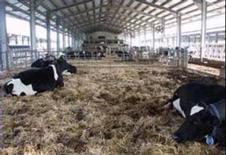 Differences between the two systems
Normally, the udder of the cows housed in cubicles is cleaner. The incidence of lameness in cattle housed in straw yards tends to be lower than those kept in typical cubicle systems, but the incidence of trodden teats can be greater, particularly if the yard is overcrowded.
There are no production or cow welfare differences between straw yards and cubicles when both are well managed. The choice between straw yards and cubicles will therefore depend on farmer preference, expertise and economic considerations. 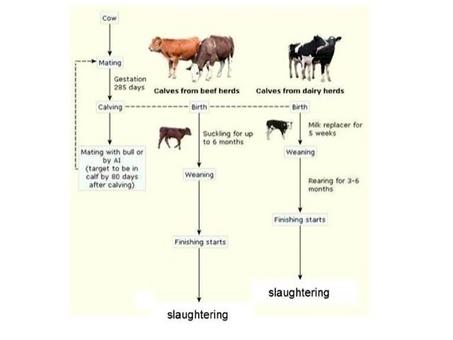 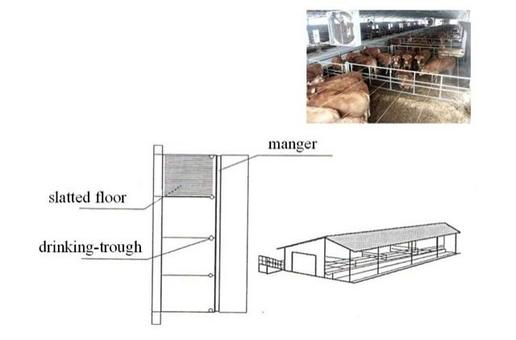 Layout of a barn for beef cattle.

Reproduction is a necessary and important part of milk production. Without regular calvings in the long run, there will be difficulties in producing the desired amount of milk. It is also important to produce sufficient heifer calves as replacement animals and allow herd size to be maintained or expanded.
Today it is most common to use artificial insemination (AI) instead of a bull. AI increases the control over the breeding and enables the dairy farmer to use sperm from all over the world, which increases the genetic gain. However, at the same time, it increases the need for good planning and well structured working routines.
Another way to get a cow pregnant is to use the embryo transfer technique. So far this is relatively uncommon, but it is expected to increase in importance. The main advantage with embryo transfer is that it is possible to generate more calves from a good cow than it is with AI.
Research has shown that suboptimal calving interval cause large economic losses to dairy farmers, second in importance only to mastitis. Milking cows in late lactation are less profitable due to the decline in production. A long calving interval means milking less profitable cows due to the decline in production, fewer calves and too many cows with low feed conversion efficiencies. Therefore, successful reproductive management has a significant impact on the herd’s overall performance and the net income.

The most sexually intensive period of the oestrus cycle is during standing heat, which lasts for approximately 18 hours. In loose-housing herds, this period is indicated by the cow in heat standing immobile when mounted by another cow or bull.
Other signs of heat are:

The duration of heat varies from animal to animal, but approximately 10 to 12 hours after the end of standing heat, the egg is released (ovulation) and the heat ends. 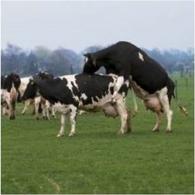 A typical example of standing heat. From Partners in Reprocution 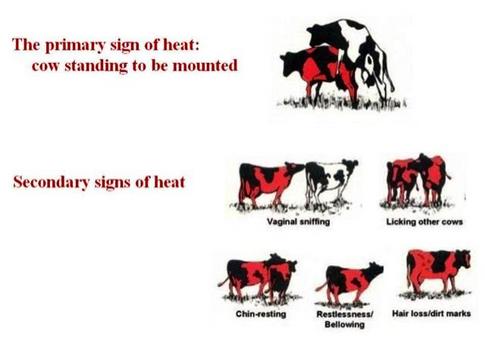 Visual heat detection relies on manual observations in the barn. The cows and heifers shall be observed for oestrus two to three times per day and all observed heats be recorded whether the animal is bred or not. The records provide the manager with information to anticipate future heats, which will make it easier to distinguish if a cow is in heat or not. Most mounting occurs between 6 p.m. and 6 a.m., and it is therefore worth trying to check for heat during these hours. To facilitate the planning and record keeping, a cow calendar is often used. This can be either manual or computerised.

The disadvantage with visual detection is that it is very time demanding and requires people with the ability to observe the right signs. This is particularly important when there are no distinct signs of heat.

Another way to identify cows in heat is to monitor their activity. During heat the activity can increase up to 8 times compared to the normal level.

The activity can automatically be recorded by using activity meters attached to the neck or leg.

By comparing the activity with the last observed heat, actual milk yield and feed consumption, a reliable indicator of heat is obtained. The automation will generate a significant time saving and improved calving interval through better heat detection. 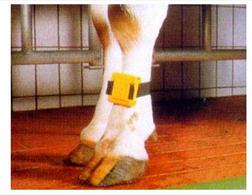 An activity meter (pedometer) fitted to the front leg. 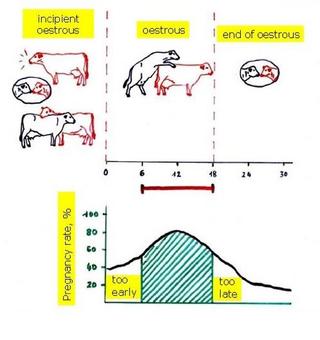 In both beef and dairy cattle, pregnancy diagnosis is an important tool to measure the success of a reproductive management, to allow for early detection of problems and to achieve resynchronization of non-pregnant cows.  More reliable methods for detecting early pregnancy in cattle are:

Non-return to oestrus
If oestrus signs are not observed around 3 weeks after service or insemination, the cow is generally assumed to be pregnant.
Relying on oestrus detection to diagnose pregnant cows is very unreliable, due to:

Cows do not show oestrus exactly every 21 days. A non- pregnant cow can have showed oestrus less than 21 days after insemination. This cow may ovulate and form a corpus luteum, which will increase progesterone concentrations. Thus, this non-pregnant cow may be erroneously diagnosed as pregnant. Cows with reproductive problems such as ovarian cysts or uterine infections also may have two consecutive high progesterone concentrations and be diagnosed as pregnant. Cows may be pregnant at 21 days after insemination but lose that pregnancy in the next 30 to 40 days. Pregnancy losses in that period may reach up to 30 % according to recent estimates.
Sometimes cows are inseminated when not really in oestrus. At 21 days after insemination, these cows will often be in the luteal phase and have high progesterone concentrations, even if not pregnant. 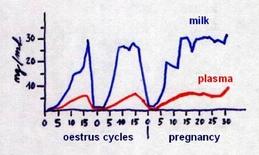 Pattern of progesterone level during oestrus and pregnancy.

An ultrasound machine resembles a radar device. A probe is inserted through the rectum and positioned above the uterus. This probe generates pulses of ultrasound that are transmitted to adjacent tissues. These pulses are then reflected back to the probe from different tissue surfaces. The reflected pulses to the probe produce an electrical signal that is processed by a scan converter and displayed on a video monitor. On the video, the intensity of the ultrasound pulses returned to the probe is converted to different shades of grey, as compared to black and white. Structures that contain fluid (such as the fluid-filled placenta) absorb most of the ultrasound pulses and the result is a black image on the video screen. On the other hand, more dense structures (such as an embryo) are more ecogenic (i.e., have greater reflectivity) and result in a light grey or white image on the screen.
The main advantages of the use of ultrasound for pregnancy diagnosis are 1) the high reliability of the results that are generated and 2) the fact that pregnancy diagnosis may be conducted relatively early after insemination (i.e., as early as 25 days after insemination).
The main disadvantages of the use of ultrasonography are related to cost and time involved with the use of this technique. Ultrasound machines are expensive and it takes more time to perform a pregnancy diagnosis with an ultrasound machine than by rectal palpation.

Rectal palpation
Palpation of the uterine contents rectally is probably the most commonly used method for pregnancy diagnosis.  Pregnancy diagnosis after insemination can be conducted as early as 30 days in heifers and 35 days in cows, although much practice is necessary to be able to determine pregnancy at that stage.
Several palpable structures are indicative of pregnancy. Due to accumulation of fluids within the pregnant uterine horn, one of the initial signs of pregnancy is a difference in size of uterine horns (i.e., uterine asymmetry). Also, it is possible to feel the slipping of the chorioallantoic membrane (foetal membrane) along the greater curvature within the uterus (i.e., membrane slip).
Rectal palpation has the advantage of being an accurate, fast, relatively cheap method that is less labour intensive as compared to the previous methods. Nonetheless, training is necessary and the exam should be conducted by a veterinarian or by an experienced herdsman.
The main disadvantage of rectal palpation is that it cannot be performed until later in gestation than some other methods. Some veterinarians are able to determine pregnancy by palpation as early as 35 days after insemination, but usually rectal examinations take place between 45 and 60 days after insemination to increase the accuracy of the exam.

When calving is approaching, the cow shows the following behaviour:

The pregnancy length in cattle varies according to the breed: 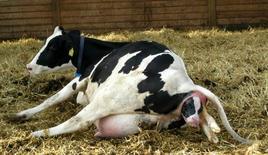 Most common causes in cattle: 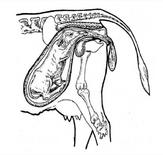 Cleaning of mucus from the mouth and nostrils by hand 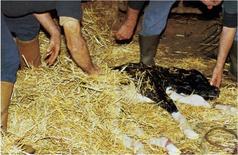 Drying off with straw. From: Associazione Provinciale Allevatori di Livorno 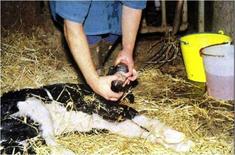 If a calf is not breathing (too much fluid in the lungs): 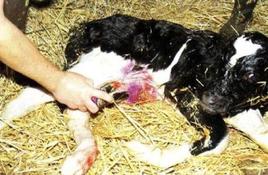 At birth, a calf’s immune system is not fully developed. Colostrum is vital food for newborn calves. Colostrum contains antibodies or immunoglobulins necessary to provide the calf with protection from disease.
Colostrum contains 22 percent solids, compared with 12 percent solids in normal whole cow’s milk. Much of the extra solid material in colostrum is immunoglobulin, but colostrum also is an important source of protein (casein), sugar (lactose), fat, and vitamins A and E.
As a general rule of thumb, a calf should receive 5 percent to 6 percent of its body weight as colostrum within the first six hours of life. That same amount should be fed again when the calf is about 12 hours old. After that time, absorbing the antibodies in colostrum becomes more difficult. At six hours after birth, calves absorb 66 percent of the immunoglobulins in colostrum, but at 36 hours after birth they are able to absorb only 7 percent of immunoglobulins.
Breed type and cow age affect the amount of colostrum a cow produces. Dairy breeds produce more than beef breeds and mature cows produce more than heifers.
Some cows don’t produce an adequate amount of colostrum. That means producers sometimes have to use colostrum from other cows or stored colostrum to ensure that each calf receives an adequate amount. For optimum results, colostrum should be collected from cows within 24 hours of calving and fed fresh. Colostrum also can be collected at calving, stored frozen and used at a later date.

Feed colostrum as soon, often and much as possible during the first 4 days.
When suckling is used on one quarter, rotate the teat during the first month to avoid a pendulous teat/quarter. When bucket feeding is applied, feed milk at the rate of 10% of body weight (5-30 d).
After 2-3 weeks introduce daily good quality, leafy roughage and palatable concentrate (whenever possible) for early development of the rumen, and to reduce calf diarrhoea.
Provide daily fresh, clean drinking water next to solid feeds.

After 30 days reduce milk gradually to 5% of body weight or reduce sucking gradually to only before and after milking.

Wean calves at (to be considered as indicative and not as strictly rules): 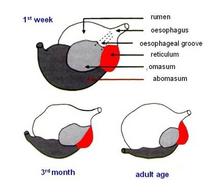 Volumetric variation of the ruminant prestomachs. 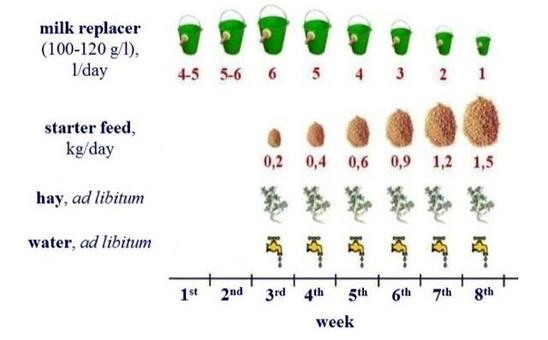