The egg is formed gradually over a period of 22-24 hours.
The hen, unlike most animals, has only one functional ovary – the left one – situated in the body cavity near the backbone.
At the time of hatching, the female chick has up to 4,000 tiny ova (reproductive cells), from some of which full-sized yolks may develop when the hen matures.

The yolk
Each yolk (ovum) is enclosed in a thin-walled sac, or follicle, attached to the ovary. This sac is richly supplied with blood. There is a small white spot about 2 mm in diameter on the surface of the yolk. This is the germinal disk and it is present even if the egg is infertile. If the egg is infertile, the germinal disk contains the genetic material from the hen only. If the egg is fertile, it contains genetic material from both parents and is where embryonic development begins. The yolk material serves as a food source for embryonic development.
The mature yolk is released when the sac ruptures, and is received by the funnel of the left oviduct (the right oviduct is not functional). The left oviduct is a coiled or folded tube about 80 cm in length. 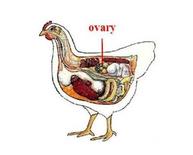 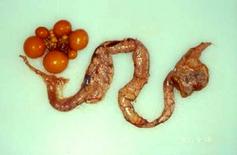 Reproductive organs of the hen.

The albumen
The egg white (albumen), the cytoplasm of the egg, is produced by the oviduct. Its primary natural purpose is to protect the egg yolk and provide additional nutrition for the growth of the embryo.
There are four types of egg white. The outer thin white is a narrow fluid layer next to the shell membrane. The outer thick white is a gel that forms the center of the albumen. The inner thin white is a fluid layer located next to the yolk. The inner thick white (chalaziferous layer) is a dense, matted, fibrous capsule of albumen around the vitelline membrane of the yolk. The matted fibrous capsule terminates on each end in the chalazae, which are twisted in opposite directions and serve to keep the yolk centered. The chalazae are twisted so that the germinal disk always orients itself upwards.

The shell
The shell is produced by the shell gland (uterus) of the oviduct, and has an outer coating, the bloom or cuticle. The generalized eggshell structure is a protein matrix lined with mineral crystals, usually of a calcium compound such as calcium carbonate. The shell is separated from the albumen (egg white) by the shell membranes, and the yolk is separated from the albumen by the yolk membrane (vitelline membrane). 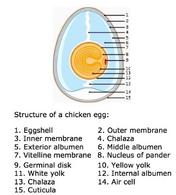 Air cell
When the egg is laid it is at the same temperature as the hen’s body. As the egg cools to ambient temperature, the egg contents contract and the two shell membranes separate, generally at the large end of the egg, forming the air cell. During storage, the egg loses water by evaporation, causing the air cell to enlarge.

The cuticle
The cuticle somewhat seals the pores and is useful in reducing moisture losses and in preventing bacterial penetration of the egg shell. Much of the cuticle is removed from table eggs when they are mechanically washed.

Location of the air cell. From: My Science Fair Projects , modified. 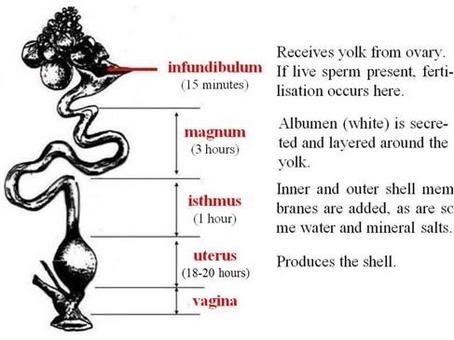 Nutritional value of the egg

The egg is one of the most complete and versatile foods available. It consists of approximately 10% shell, 58% white and 32% yolk. Eggs are a good source of high quality protein. They supply all essential amino acids for humans, and provide several vitamins and minerals. The yolk contains approximately 60 calories (250 kilojoules) and more than two-thirds of the recommended daily intake of 300 mg of cholesterol. Only 27% of the fat in egg is saturated fat (palmitic, stearic and myristic acids) that contains LDL cholesterol.
The egg albumen contains about 15 calories (60 kilojoules). It consists primarily of water (87%) and protein (13%) and contains no cholesterol and little, if any, fat. Eggs contain every vitamin, except vitamin C. They are particularly high in vitamins A, D, and B12, and also contain B1 and riboflavin (vitamin B2). Eggs are a good source of iron and phosphorus and also supply calcium, copper, iodine, magnesium, manganese, potassium, sodium, zinc, chloride and sulphur. All these minerals are present as organic chelates, highly bioavailable, in the edible part of the egg. Low caloric value, ease of digestibility and high nutrient content make eggs valuable in many therapeutic diets for adults.

Marketing quality eggs
Quality determines the acceptability of a product to potential customers. The quality of eggs and their stability during storage are largely determined by their physical structure and chemical composition.

External egg quality
The “normal” chicken egg is elliptical in shape. Eggs that are unusual in shape, such as those that are long and narrow, round, or flat-sided cannot be considered of quality. Round eggs and unusually long eggs have poor appearance and do not fit well in cartons so are much more likely to be broken during shipment than are eggs of normal shape.

The two most desirable shell qualities, cleanliness and soundness, are largely controlled by the production and handling of eggs.

Shell colour, caused by pigment deposition during egg formation in the oviduct, may vary from white to brown, depending upon the breed of the hen. There is no difference in quality, flavour, nutritional value or shell thickness.

Double-yolked eggs occur when two yolks move through the oviduct together, either from simultaneous ovulations or delay in a yolk’s passage through the oviduct. Such eggs are usually larger due to the presence of the two yolks.
Although heredity causes some hens to have a higher propensity to lay double-yolked eggs, these occur more frequently as occasional abnormalities in young hens beginning to lay.

Air cell
Chicken eggs are graded according to the size of the air cell, measured during candling.
A very fresh egg has a small air cell (< 4 mm) and receives a grade of A extra.
As the size of the air cell increases, and the quality of the egg decreases, the grade moves from A extra to A (< 6 mm) to B (< 9 mm).
This provides a way of testing the age of an egg: as the air cell increases in size, the egg becomes less dense and the larger end of the egg will rise to increasingly shallower depths when the egg is placed in a bowl of water. 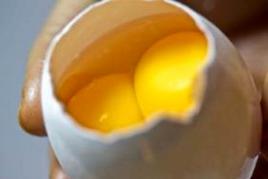 A double-yolked egg. From: Some Contrast

As an egg ages:

Yolk quality
In quality eggs the yolk should be round, firm and stand up well, and be yellow in colour.
As the yolk ages, it absorbs water from the albumen and increases in size. This weakens the vitelline membrane and gives the yolk a somewhat flattened shape on top and a general “out-of-round” shape. Ruptured yolks occasionally occur. 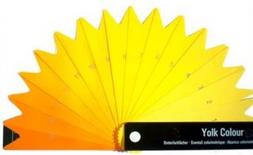 The weight of eggs varies widely depending on many factors such as the breed, the age of the layer and environmental temperature. 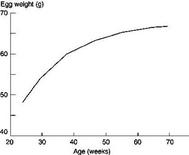 Variation of the egg weight according to age of the layer. From: FAO, Agricultural Services Bulletin 150, Egg marketing, A guide for the production and sale of eggs 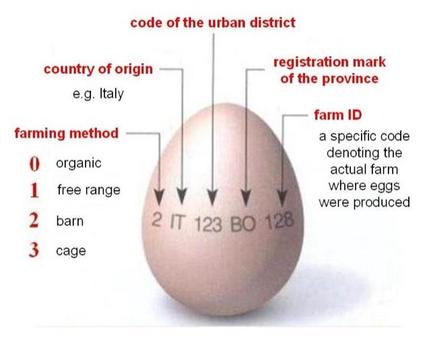 Sandpaper or rough shells
The terms ’sandpaper shells’ and ‘rough shells’ refer to eggs with rough-textured areas, often unevenly distributed over the shell.
The incidence is normally less than 1% of total production, but may be higher for some strains of bird. It is also higher in early lay, often as a result of double ovulation, which produces one shell-less egg and another one with extra shell deposits.

Body-checked eggs
The shells of body-checked eggs are marked by grooves and ridges called ‘checks’. These are usually at the ends of the egg, especially the pointed end.
Checks at the middle, or ‘waist’, often completely encircle the egg. Such defects are the result of repairs to damage caused by stress or pressure when the egg is in the shell gland. This stage of development usually occurs in the last hours of the light period or the first half of the dark period.
The percentage of body-checked eggs increases with flock age: at 35 weeks it can be up to 1%; at 60 weeks it can be 9%.

Thin-shelled eggs and shell-less eggs
Eggs with very thin shells, or no shell at all around the shell membrane, look unattractive and are highly susceptible to damage.
The incidence of these eggs varies from about 0.5 to 6%. They are commonly produced by pullets coming into lay, particularly by birds that have matured early. Some birds continue to lay this type of egg.

Mottled or glassy shells
When parts of the egg shell are translucent, it appears mottled or glassy. Such shells can also be thin and fragile.
The incidence is variable. Such eggs are not usually down-graded unless the condition is very obvious or the shells are thin.

Blood spots
Blood spots vary from barely distinguishable spots on the surface of the yolk to heavy blood contamination throughout the yolk. Occasionally blood may be diffused through the albumen or white of the egg.
The incidence varies between strains of bird and can be as high as 10%. Between 2 and 4% of all eggs contain some blood.

Meat spots
Most meat spots are pieces of tissue from body organs, but some may be partially broken-down blood spots. They are usually brown in colour, and found in the thick albumen, chalazae, or the yolk. They range in size from 0.5 mm to more than 3 mm in diameter.
The incidence of meat spots ranges from less than 3% to 30% or more. 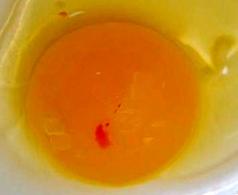 Pale yolks
The colour of the yolk is due to substances called carotenoids. The most important sources of carotenoids in poultry feed are maize (corn), maize gluten, alfalfa (lucerne) and grass meals; these sources contain the pigmenting carotenoids lutein and zeaxanthin, which, together with other oxygen-containing carotenoids, are known by the collective name of xanthophylls.
The nutritional value of the egg is not affected by the yolk colour.