New Zealand White
This breed is used most widely throughout the world for meat production. It is all white in colour. The eyes are red. Usually weighs 3-5 kg when mature.

Californian
This is the second most popular breed for meat production. The colour is all white but with black tipping on the nose, ears, feet and tail. The weight range for the mature subjects is 3-4.5 kg.

Champagne d’Argent
It has a body color of bluish-white with dark slate blue under fur and jet black guard hairs. The fur is heavy and high-piled. Breed very tough, reared both in purity and especially cross-bred. The weight at slaughtering is 2.5-2.6 kg and the average slaughter yield is 60-62%.

Vienna blue
Breed of medium-weight, elegant, with good muscular development.
Even if makes appreciable performance as pure breed, is preferred for cross-breeding. The weight at slaughtering is 2.4-2.6 kg and the average slaughter yield is 60-62%.

Fauve de Bourgogne
The subjects of this breed are tough and prolific. They have a long cylindrical trunk with a good muscular development. In cross-breedings, this breed is used especially as the male line for its prolificity and slaughter yield. The weight at slaughtering is 2.4-2.6 kg.

Angora
This breed is reared for wool production. The body weight is about 4.2-4.7 kg, with peaks of more than 5 kg. In the mature rabbit the coat is 8 cm long. The average wool production is 100-150 g/animal every 100 days. 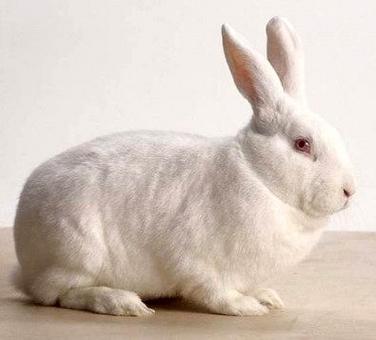 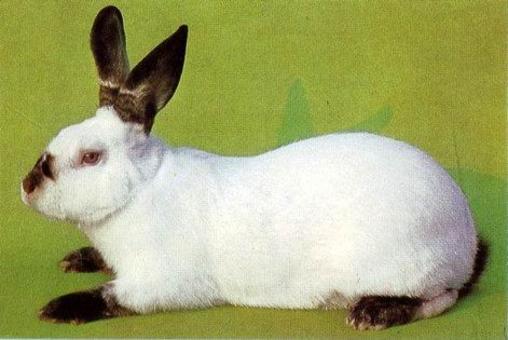 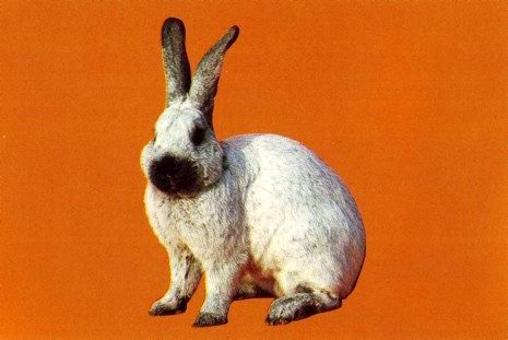 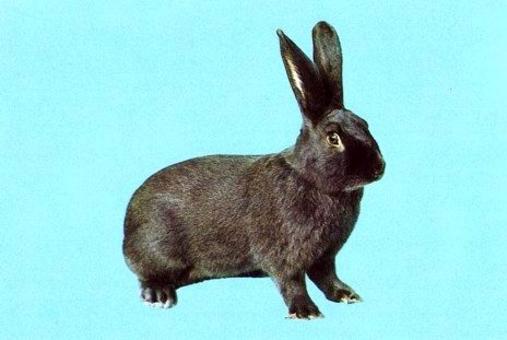 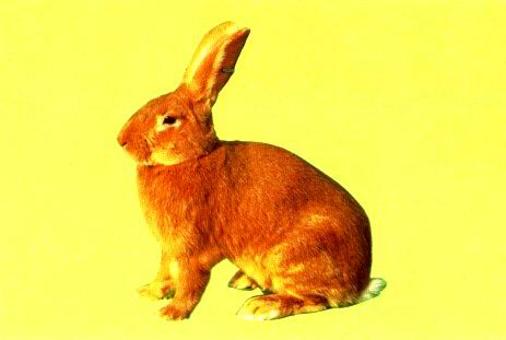 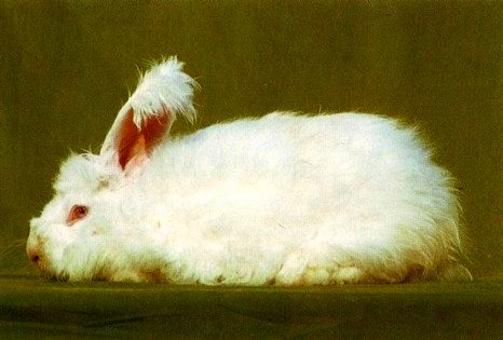 Rabbits are prolific in terms of offspring (kg/year/doe) and will breed all year round if well-managed.
Shortening the unproductive period before the first litter would automatically increase productivity.
A doe is ready to breed at about 6 months of age and a buck at about 7 months. If production conditions are not optimum the first mating will be delayed until the animals reach 80% of their adult weight.
The normal estrus cycle is 16 to 18 days, with 2 infertile days at the beginning and the end when the doe lacks interest in the buck. The signs of estrous are: restlessness, nervousness and rubbing chin on equipment.
Courtship behavior involves licking, sniffing, and following the doe. Spraying urine is also a common sexual behavior. Courtship and mating are very brief, lasting only 30 to 40 seconds.
Female rabbits are reflex ovulators. Ovulation begins 10 hours after mating.
Does will show a false pregnancy following unsuccessful matings. This false pregnancy lasts 17 days, and the doe will not breed during this period. For this reason, most commercial breeders will generally rebreed the doe on the 18th day.
Bucks should be used no more than 2 or 3 times per week, although they can be successfully used several times per day for short periods.
Gestation length: 30 to 33 days
Breeding season: year around
Breeding ratio: 1 buck/10-20 does
Does can kindle up to 13 offsprings at a time, the average being 8.
Rabbits usually produce 4 to 5 litters in a year.

With proper management, rabbits can be reared intensively.
There are three basic rates of reproduction: extensive, semi-intensive and intensive.

Extensive reproduction rate
The breeder fully utilizes the does’ maternal instincts by allowing them to nurse their young for five to six weeks, rebreeding them soon after weaning. Does are therefore serviced once every two and a half months.

Semi-intensive rate
The breeder has does serviced 10 to 20 days after kindling and the young are weaned at four to five weeks. There is no real contrast between pregnancy and lactation for does. For 10 to 20 days the doe is newly pregnant while still nursing. The most important phase of embryo development takes place during the slump in milk production (milk production may even have ceased), so there is no real competition between the demands of gestation and lactation. As these does never have a resting period they need sufficient and well-balanced concentrate feed.

Intensive rate
The breeder has the does reserviced just after kindling, taking advantage of the fact that they are then on heat. Weaning should take place at four weeks at the latest, usually at 26 to 28 days. There are three main techniques: 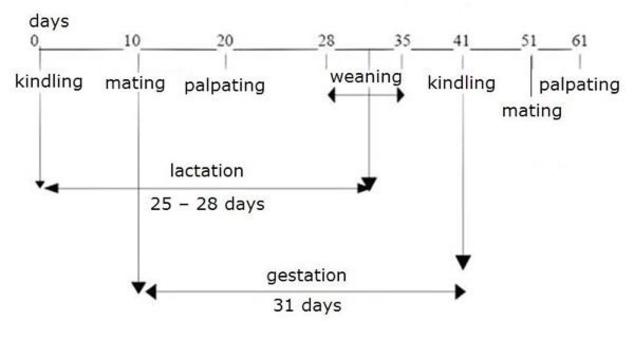 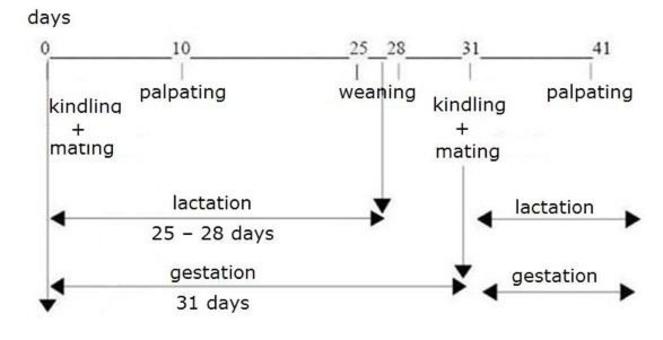 Caecotrophy is the eating of faecal-like pellets produced in the caecum. These caecal pellets are sometimes called soft faeces. To do this, the rabbit sucks in the soft faeces as they emerge from the anus, then swallow without chewing.
Consumption of the soft faeces starts when the rabbit is about 4 weeks old. Note that rabbit can survive without practicing caecotrophy for many days but death is usual if they are prevented from eating their soft faeces for several months.
Soft faeces are higher in crude protein and lower in crude fibre than hard faeces. Their higher protein level is due to their  bacteria.
Caecotrophy is a very important part of the rabbit’s digestive processes. It recycles some unabsorbed nutrients as well as returning protein and vitamin B rich bacteria for enzyme digestion to the small intestine.

Types of housing
Housing for rabbits can be either outdoors or within a building.

Outdoor housing
This system is often less expensive than indoor housing and, because of better ventilation, the rabbits are usually healthier in outdoor units. However, security is more difficult to provide with outdoor units, and the protection from the weather may not be as good as indoors.

Indoor housing
This system is more expensive but provides better weather protection, better security and more efficiency than the outdoor units.
The disadvantages of the indoor housing include the cost, problems with temperature and humidity control and difficulty with ventilation. There may be a greater incidence of diseases, especially respiratory problems.
Indoor housing generally involves the use of cages.

Bucks and does are housed separately. For mating purposes, the doe should always be taken to the buck’s cage and not vice versa. If they fail to mate within a few minutes, the doe should be given to a different buck. 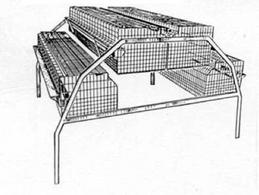 The nest box should be placed in the hutch on the 28th or 29th day of pregnancy. The nest is kept out of the hutch until this time to avoid contamination by the doe. Usually litters are kindled during the night and it is necessary that the doe is not disturbed while kindling. If the doe is not accorded seclusion she will destroy the litter.
As soon as kindling has been completed, the doe pulls more fur from her body to prepare a nest. Most breeders will replenish several nest boxes with clean fur for first litter does that do not pull enough fur to make a good nest. Forty-eight hours after kindling, the producer should observe and count the bunnies, removing dead animals.
The average litter is 8, but it can range from 4 to 14 or more.
As the average doe is equipped to nurse up to 8 bunnies, it is common practice to breed several does simultaneously, and then transfer bunnies from the large litter to the small ones 2 or 3 days after kindling to even out the milk supply. 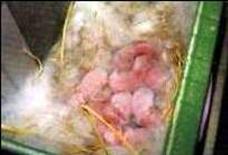 Normal weaning time is at 6 or 8 weeks of age. During the weaning period the young gradually give up milk for solid feed. Weaning is also the time when the breeder separates the young from the doe. An extra litter per year could be gained by rebreeding the doe at 6 weeks (following kindling) while she is nursing her litter, and then weaning at 8 weeks. Sexes should be segregated at the time of weaning.
Weaning can take place when the rabbit’s live weight is over 500 g (after approximately 26 to 30 days). The young rabbits begin to eat solid feed at 18 to 20 days and at 30 days the doe’s milk provides no more than 20% of the daily dry-matter intake. In practice, young rabbits benefit from the late weaning until the age of six weeks.

Rabbits must be protected from the extremes of heat, rain, sun, strong drafts and winds.
For optimum health and well-being the average temperature should be kept between 15 and 21 °C.
Rabbits are extremely susceptible to excess humidity.
Wire cages are recommended over wooden ones because they are durable and are easy to clean and disinfect.
Cages should be sanitary, durable and self- cleaning. For this reason, wire cages are recommended. Fresh clean water should be available at all times. Automatic watering devices with stem valves assure a supply of fresh water, save time and are much more sanitary than water dishes. A filter system may be necessary depending on the water supply.

Commercial rabbit production
Rabbits can produce up to ten times their own weight in edible meat in a year’s time.
Rabbit production and processing involves a series of interrelated steps and the quality of rabbit muscle as food depends upon chemical, physical, and structural changes that occur in the conversion of muscle to meat.
During the production and management of rabbits, pre-slaughter factors not only exert important effects on muscle growth, composition, and development, but also determine the state of the animal at slaughter.
The young are ready for market at 1.8 to 2.2 kg. With proper care and feeding, they will be 8 weeks old or less at this stage.
Rabbit carcasses are only 20% bone.

Rabbit meat composition
Rabbits are an important source of food. They produce white meat that is finegrained and that can be substituted for poultry in most recipes. Its organoleptic properties are tenderness and juiciness. Its flavor is not strong; it is comparable to the taste of turkey. 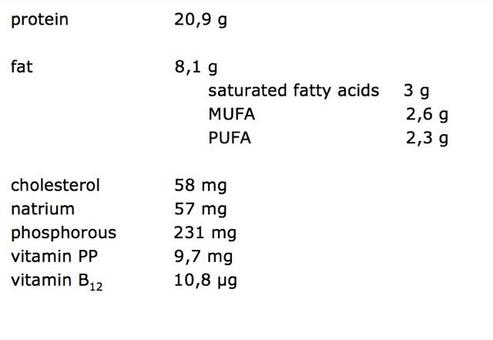