Livestock slaughter procedures
The slaughter of livestock involves three distinct stages: preslaughter handling, stunning and slaughtering.
Preslaughter handling
The optimum amount of rest required by meat animals before they are slaughtered depends on the climate, the distance they have travelled, their method of transport and their general health. In some situations, a rest period of one day is considered to be optimum.
Preslaughter handling is a major concern to the livestock industry, especially the pork industry. Stress applied to livestock before slaughter can lead to undesirable effects on the meat produced from these animals, including both PSE and DFD. Preslaughter stress can be reduced by preventing the mixing of different groups of animals, by keeping livestock cool with adequate ventilation and by avoiding overcrowding.
Before slaughter, animals should be allowed access to water but held off feed for 12 to 24 hours to assure complete bleeding and ease of evisceration (the removal of internal organs).
The purpose of ante mortem inspection is to identify injured animals that must be slaughtered before the others, and to identify sick animals that must be slaughtered separately or subjected to special post mortem examination.
When ready for slaughter, animals should be driven to the stunning area in a quiet and orderly manner without undue fuss and noise.

Stunning
As the slaughter process begins, livestock are restrained in a chute that limits physical movement of the animal. Once restrained, the animal is stunned to ensure a humane end with no pain. Stunning also results in decreased stress of the animal and superior meat quality.
The end result of stunning is to render the animal unconscious.
Mechanical stunning involves firing a bolt through the skull of the animal using a pistol. The concussion instrument is then accurately located at a point on the midline of the skull, above the level of the brow ridges of the eye sockets. The captive bolt pistol resembles a heavy hand gun, but a blank cartridge is used to propel a cylindrical bolt rather than a bullet into the skull. After penetration, the bolt is withdrawn into the barrel of the pistol and the pistol is reloaded.

Exsanguination
After stunning, animals are usually suspended by a hind limb and moved down a conveyor line for the slaughter procedures. The exsanguination or sticking of meat animals in an abattoir is usually performed by severing the carotid arteries and the jugular vein at the base of the neck. This method allows for maximal blood removal from the body.
Once exsanguination has started, the pulse and mean blood pressure rapidly decline because of the reduced stroke volume of the heart. Incomplete exsanguination increases the amount of residual blood in the carcass. The lean meat may then appear unduly dark and the fat may become streaked with blood.
Blood loss as a percentage of body weight differs between species: cows, 4.2 to 5.7%; calves, 4.4 to 6.7%; sheep, 4.4 to 7.6% and pigs, 1.5 to 5.8%.
Approximately 60% of blood is lost at sticking, 20-25% remains in the viscera, while a maximum of 10% may remain in carcass muscles. Different stunning methods may modify the physiological conditions at the start of exsanguination and, also, the neural responses to exsanguination.

Evisceration
The head is removed, as well as front and rear feet. Prior to hide removal, care is taken to cut around the digestive tract to prevent fecal contamination later in the process.
The carcasses may be divided into quarters by cutting each side in two pieces. The carcasses are always split in half and then quartered. 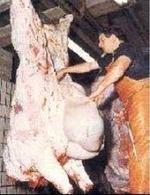 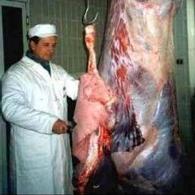 Carcass refrigeration
Carcasses are chilled to reduce the microbial spoilage of their meat. The rate of chilling is determined by the temperature, the relative humidity and the velocity of the air in the meat cooler. In addition to direct heat losses by conduction, convection and radiation, heat is lost from a carcass when water evaporates on its surface. Carcasses cool rapidly if they have a large surface area relative to their mass, and if they have only a thin covering of subcutaneous fat for insulation.

Meat must never be frozen before rigor mortis has occurred and the meat has become stiff and inextensible. If the carcass is chilled too rapidly, before the glycogen in the muscles has been converted to lactic acid, the result is cold shortening and subsequent toughness. With glycogen still present as an energy source, the cold temperature induces an irreversible contraction of the muscle (i.e., the actin and myosin filaments shorten). Cold shortening causes meat to be as much as five times tougher than normal. This condition occurs in lean beef and lamb carcasses that have higher proportions of red muscle fibres and very little exterior fat covering.
The process of electrical stimulation (the application of high-voltage electrical current approximately for one minute to carcasses immediately post mortem) reduces or eliminates this condition by forcing muscle contractions and using up muscle glycogen. This stimulation speeds natural processes that occur after death, improves tenderness, color, texture and firmness and makes hide removal easier.

By-products are the nonmeat materials collected during the slaughter process, commonly called offal.
Variety meats include livers, brains, hearts, sweetbreads (thymus and pancreas), fries (testicles), kidneys, oxtails, tripe (stomach of cattle), and tongue.
Bones and rendered meat are used as bone and meat meal in animal feeds and fertilizers.
Gelatin, obtained from high-collagen products such as pork snouts, pork skin, and dried rendered bone, is used in confections, jellies, and pharmaceuticals.
Intestines are used as sausage casings.
Hormones and other pharmaceutical products such as insulin, heparin, and cortisone are obtained from various glands and tissues.
Edible fats are used as lard (from hogs), tallow (from cattle), shortenings, and cooking oils.
Inedible fats are used in soap and candle manufacturing and in various industrial grease formulations.
Lanolin from sheep wool is used in cosmetics.
Finally, hides and pelts are used in the manufacture of leather. 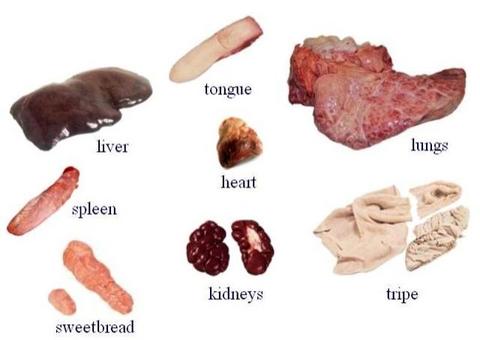 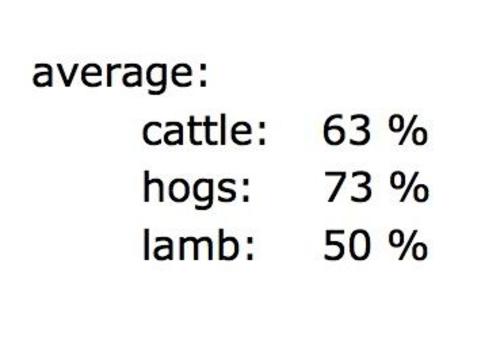