The refrigeration cycle is a cyclic thermodynamic processes that occurs in special machines called cars inverse, since in these machines work is exploited instead of being produced.

A reversed cycle equipment, also called refrigerator, can be described as in figure below.

The refrigeration equipment may be used for two main purposes:

In the first case the equipment keeps the temperature T2 constant (in theory) by absorbing the heat Q2 and transferring Q1 to the the tank at temperature T1, which is usually represented by the external environment.

For this reason a normal fridge, during operation, transfer heat into the environment through a coil that works like a real stove, often making the kitchen the warmest room in a house.

In the second case, the main purpose is to transfer the heat Q1 to the tank at a temperature T1, to heat an external environment such as an apartment.
This can be done by absorbing the heat Q2 from a reservoir which in this case is represented by the external environment, but this requires the work W.

The operation of a refrigerating machine is quite similar to a Rankine cycle machine, which can be considered the respective direct cycle machine.

The reverse cycle consists of the same elements as the direct cycle, even if the turbine in this case can be replaced by a lamination valve.

The work produced by the turbine is very small, so it is no longer recovered, and it is preferable to use a lamination valve in lamination which has a lower cost.

1 -> 2 The fluid, which in 1 is the state of dry saturated steam (unitary), passes through a compressor that increases the pressure by means of a reversible adiabatic transformation.During this transition there is a significant increase in the temperature of the fluid, which in 2 is within the range of superheated steam. 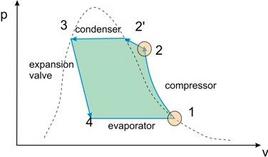 At this point, again at constant pressure, the vapor begins to condense (2′->3) and at constant temperature comes into point 3, which is located on the lower limit curve (Title 0). 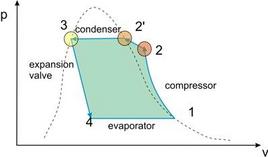 3 -> 4 The fluid passes through a lamination and undergoes an isoentalpic transformation (h3 = h4), which decreases the pressure and temperature and increases the volume.
The use of a valve means that this transformation is no longer reversible and adiabatic as in the case of the turbine (3 -> 4′), indeed, the valve makes this process highly irreversible and hence the impossibility of drawing a path defined by 3 to 4. 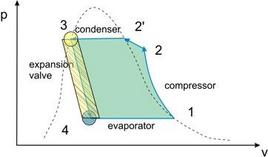 4 -> 1 The fluid, which in 4 is almost completely liquid, enters the evaporator and the constant pressure vaporization begins absorbing heat Q2 supplied to the system (and extraxcted from the cold system) to reach the initial state 1 in which it can restart the cycle. 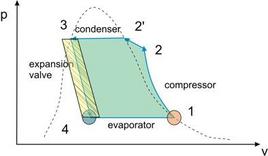 Depending on how the reverse cycle machine is used, two different index are defined:

The EER and COP are defined as the capacity output divided by the power input.

Refrigeration consists in lowering the food temperature in the rang of 0°C to + 4°C.

Using this technique, we can preserve the natural freshness of food for very short periods (36/48 hours).

Freezing is a cold storage system allowing us to keep food in the range from -7°C to -12°C.

Although it is an effective method to lengthen the storage of perishable foods, it is not sufficient to block 100% of living cells and the activity of enzymes, causing the slow deterioration of the organoleptic qualities of the original product.

The freezing process, developing with a slow dynamic, determines the formation of large ice crystals inside the food.

The crystals can disrupt cell walls and cause damage to the biological structure of the food so that thawing will cause a decrease of nutritional value and a softening of the original structure.

Deep freezing may be defined as the best method of physical storage of food.

Modern technologies adopted industrially bring the product to reach the core temperature of -18°C using cooling temperatures ranging from -35°C to -190°C, depending on the freezing media, and freezing times ranging from 3 to 40 minutes.

The great rapidity of the freezing process makes the technique more effective in several points compared to normal freezing.

Firstly during freezing, the rapid formation of microcrystal of ice implies no damage the biological structure of food, keeping the original quality of the fresh product.

Maintaining the temperature at – 18°C slows down exponentially chemical and enzymatic reactions and the development of microbes becomes almost nil.

The vitamin content of frozen foods is even higher than fresh produce stored for more than 24 hours.

Ultimately, if the cold chain must is correctly maintained at a temperature of -18 °C, frozen and fresh food are comparable for quality and nutritional value.