Distillation is a process in which a mixture of two or more substances in vapor or in liquid phase is separated into its component fractions of desired purity by providing heating and refrigeration.

The physical feature exploited in distillation is the fact that the vapour of a boiling mixture is richer in the componentswith  lower boiling points.

Therefore, by cooling and condensing this vapour we obtain a condensate containing more volatile components.

As a consequence, the original mixture will contain more of the less volatile material.

The equipment used to perform this process are called distillation columns.

Distillation is one of the most common separation technique; a considerable amount of energy is required for cooling and heating.

The energy requirements can contribute to more than 50% of plant operating costs.

As already mentioned, separation of components from a liquid mixture via distillation depends on the differences in boiling points of the individual components.

Depending on the concentrations of the components present, the liquid mixture will have different boiling point characteristics.

Therefore, distillation processes depend on the vapor pressure characteristics of liquid mixtures.

The vapor pressure of a liquid at a particular temperature is the equilibrium pressure exerted by the balance of the molecules leaving and entering the liquid surface.

Vapor pressure is related to boiling;

When the vapor pressure equals the surrounding pressure, then a liquid start boiling;

The ease with which a liquid boils depends on its volatility: liquids with high vapor pressures (volatile liquids) will boil at lower temperatures;

The vapor pressure and hence the boiling point of a liquid mixture depends on the relative amounts of the components in the mixture;

Distillation occurs because of the differences in the volatility of the components in the liquid mixture.

The boiling point diagram shows how the equilibrium compositions of the components in a liquid mixture vary with temperature at a fixed pressure.

Consider a binary mixture of a liquid mixture containing 2 components (A and B), represented in the following boiling point diagram.

The region above the dew-point curve shows the equilibrium composition of the superheated vapor. 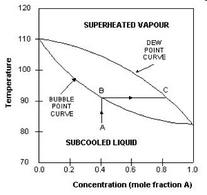 For example, when a sub cooled liquid with mole fraction of A=0.4 (point A) is heated, its concentration remains constant until it reaches the bubble-point (point B), when it starts to boil.

The vapors evolved during the boiling has the equilibrium composition given by point C, approximately 0.8 mole fraction A.

This is approximately 50% richer in A than the original liquid. 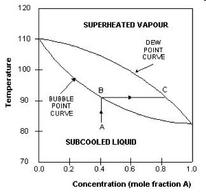 The vertical shell houses the column internals and together with the condenser and reboiler, constitute a distillation column. 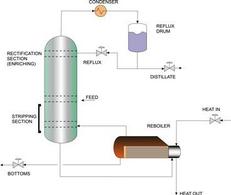 Basic Operation in Distillation
The liquid mixture to be processed is defined as the feed F and this is introduced usually somewhere near the middle of the column to a tray known as the feed tray.

The feed tray divides the column into a top section (enriching or rectification) and a bottom section (stripping).

The feed flows down the column where it is collected at the bottom in the reboiler.
Heat is supplied to the reboiler to generate vapour.

The source of heat input can be any suitable fluid, although in most chemical plants this is normally steam.

In refineries with multiple column, the heating source may be the output streams of other columns working at different pressure.

The vapour raised in the reboiler is then re-introduced into the unit at the bottom of the column.

The liquid removed from the reboiler is known as the bottoms product or simply, bottoms. 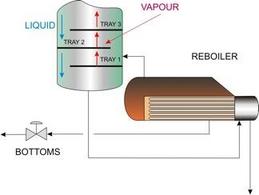 As the vapour moves up the column, it exits the top of the unit, and it is cooled by a condenser.

The condensed liquid is then stored in a holding vessel called reflux drum.

Some of this liquid is recycled back to the top of the column and this is called the reflux.

The condensed liquid removed from the system is called the distillate or top product.

Thus, within the column a series of internal and external flows (feeds and product streams) of vapour and liquid are present.

COLUMN INTERNALS
The terms “trays” and “plates” are used interchangeably. There are several types of tray designs, but the most common ones are :

A bubble cap tray has a riser or chimney fitted over each hole, and a cap that covers the riser.

The cap is mounted so that there is a space between riser and cap to allow the passage of vapor.

Vapor rises through the chimney and is directed downward by the cap, finally discharging through slots in the cap, and eventually bubbling through the liquid on the tray.

The next figures show the direction of vapour and liquid flow across a tray, and across a column.

Each tray has 2 conduits, one on each side, called ‘downcomers’.

Liquid falls through the downcomers by gravity from one tray to the one below it.

The flow across each plate is shown in the above diagram on the right.

Being lighter, vapor flows up the column and is forced to pass through the liquid, via the openings on each tray.

The area allowed for the passage of vapor on each tray is called the active tray area.

The frothing of the liquid on the active tray area is due to both passage of vapor from the tray below as well as boiling.

As the hotter vapor passes through the liquid on the tray above, it transfers heat to the liquid.

In doing so, some of the vapor condenses adding to the liquid on the tray.

The condensate, however, is richer in the less volatile components than is in the vapor.

Additionally, because of the heat input from the vapor, the liquid on the tray boils, generating more vapor.

This vapor, which moves up to the next tray in the column, is richer in the more volatile components.

This continuous contacting between vapor and liquid occurs on each tray in the column and brings about the separation between low boiling point components and those with higher boiling points. 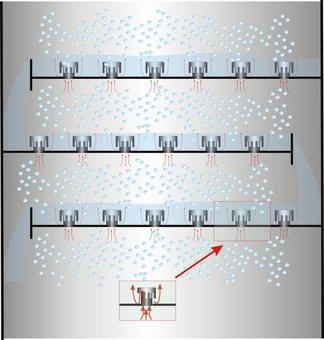 In valve trays, perforations are covered by liftable caps.

Vapor flows lifts the caps, thus self creating a flow area for the passage of vapor. The lifting cap directs the vapor to flow horizontally into the liquid, thus providing better mixing than is possible in sieve trays. 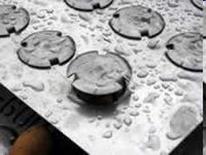 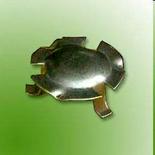 Sieve trays are simply metal plates with holes in them. Vapor passes straight upward through the liquid on the plate.

The arrangement, number and size of the holes are design parameters.

Because of their efficiency, wide operating range, ease of maintenance and cost factors, sieve and valve trays have replaced the once highly thought of bubble cap trays in many applications. 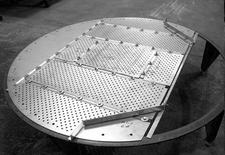 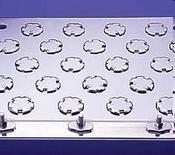 Additionally, because of the heat input from the vapor, the liquid on the tray boils, generating more vapor.

This vapor, which moves up to the next tray in the column, is richer in the more volatile components.

This continuous contacting between vapor and liquid occurs on each tray in the column and brings about the separation between low boiling point components and those with higher boiling points.

There is a clear trend to improve separations by supplementing the use of trays by additions of packings.
Packings are passive devices that are designed to increase the interfacial area for vapor-liquid contact.

These strangely shaped pieces are supposed to impart good vapor-liquid contact when a particular type is placed together in numbers, without causing excessive pressure-drop across a packed section.

This is important because a high pressure drop would mean that more energy is required to drive the vapor up the distillation column.

A tray column that is facing throughput problems may be de-bottlenecked by replacing a section of trays with packings. This is because: