These definitions are often used in the literature and are quantified through relationships involving gas velocity, solids mass flow rate and pressure drop.

The superficial solids (particles) velocity is defined as:

where subscript “s” denotes superficial and subscripts “f” and “p” are referred to the fluid and particles respectively.

The fraction of pipe cross-sectional area available for the flow of gas is assumed to be equal to the volume fraction occupied by gas, i.e., the voidage or void fraction e .

The fraction of pipe area available for the flow of solids is therefore (1 – ε ).
Actual gas velocity is then,

The symbol G denotes the mass flux of solids, that is,

where Mp is the mass flow rate of solids.

The relative velocity between particle and fluid (slip velocity) Uslip can be defined as:

In vertical dilute phase flow it is often assumed that the slip velocity is equal to the single particle asymptotic velocity UT.

We can consider a unit length of transport pipe into which particles and gas are fed at constant mass flow rates respectively of Mp and Mf.

The continuity equation for the particles is:

while for the gas it is:

Combining these continuity equations gives an expression for the ratio of mass flow rates. This ratio is known as the solids loading:

The average voidage ε at a particular position along the length of the pipe is a function of the solids loading and the magnitudes of the gas and solids velocities for given gas and particle density.

Let us compute the total pressure drop along a section of transport using the momentum equation for a section of pipe δL. 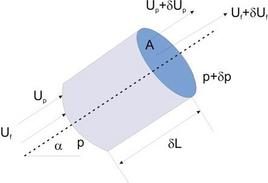 Let us consider a section of pipe of cross-sectional area A and length δL  inclined to the horizontal at an angle α and carrying a suspension of voidage ε. The momentum balance equation can be written as: see figure

Equation 13 applies in general to any flow of gas-particle mixture in a pipe, as no assumption has been made whether or not the particles are transported in dilute phase or dense phase. 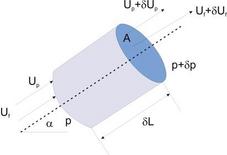 Some of these terms can be neglected in some cases:

The main unknown in the equations are: 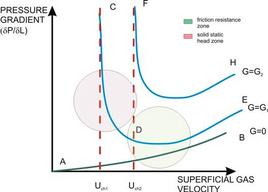 7. In the region DE the decreased velocity results in a rapid increase in solids concentration until the gas can no longer entrain all the solid phase, and a flowing and slugging fluidized bed can appear in the transport line.
8. The phenomenon is known as “choking”, and it is accompanied by large pressure fluctuations. The choking velocity, UCH is defined as the lowest velocity at which this dilute phase transport mode can be operated at the solids feed rate G1. Increasing the feed rate to G2 will result in a reasonably higher choking velocity.
9. The choking velocity sets the boundary between dilute phase and dense phase in vertical pneumatic transport.
10. Choking can be reached either by decreasing the gas velocity at a constant solids flow rate, or by increasing the solids flow rate at a constant gas velocity. 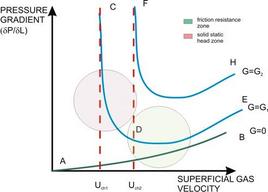 Theoretical exact prediction of the choking velocity is not possible, although some correlations for predicting choking velocities are available in the literature. Punwani correlation (Punwani, D. V., Modi, M. V. and Tarman, P. B. (1976), International Powder and Bulk Solids Handling and Processing Conference, Chicago) considers the effect of gas density:

εCHis the voidage in the pipe at the choking velocity UCH; ρp is the particle density; ρF is the gas density
G is the solids mass flux (= Mp / A); UT is the asymptotic free fall or terminal velocity, of a single particle in the gas (Stokes velocity).

The general relationship between gas velocity and pressure gradient Δp / ΔL for a horizontal transport line is shown in the following figure and it is similar to the vertical transport line one. 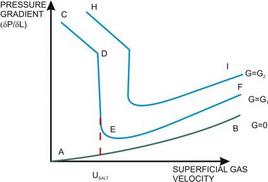 The curbs define to the following situations:

point C : the carrier gas velocity is sufficiently high to carry all the solids in very dilute suspension.
Turbulence effects in carrier gas prevent the solids from settling to the walls of the pipe.

If the gas velocity is reduced at constant solids feed rate, the frictional resistance and Dp / DL will decrease.
The solids will move more slowly and the solids concentration will increase.

point D : the gas velocity is insufficient to maintain the solids in suspension and the solids begin to settle out in the bottom of the pipe.
The gas velocity at which this occurs is called the saltation velocity.
Further decrease in gas velocity will result in a rapid increase of Δp / ΔL as the area available for the carrier gas is reduced by the presence of settled solids. 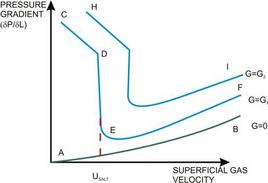 In the region E and F some solids may move in dense phase flow along the bottom of the pipe whilst others travel in dilute phase flow in the gas in the upper part of the pipe.

It is not possible to theoretically predict the conditions under which saltation will occur, but many correlations for predicting saltation velocity are available in the literature.

The saltation gas velocity is usually multiplied by a factor (approximately 1.5) , which is dependent on the nature of the solids, to obtain at a design gas velocity.

The correlation of Rizk (Rizk, F. (1973) Dr-Ing. Dissertation, Technische Hochschule Karlsruhe), based on a semi-theoretical approach, has an approximate error range of 50% .

we can express: see figure. 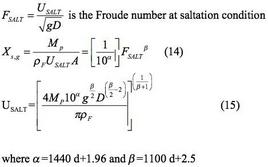