A proper combination of pipe size and gas velocity, calculation of the resulting pipeline pressure drop and a selection of appropriate equipment for moving the gas and separating the solids from the gas at the end of the line are the necessary inputs in the design of a dilute phase transport system.

Optimal design requires that in both horizontal and vertical dilute phase transport the system operates at the lowest possible velocity in order to minimize frictional pressure loss, reduce attrition and corrosion effects and, as a consequence, running costs.

Given a specific pipe size and solids flow rate, the saltation velocity is always higher than the choking velocity, so that in a transport system comprising both vertical and horizontal lines, the gas velocity must be selected to avoid saltation: if we avoid saltation, choking will also be avoided.

These systems would ideally operate at a gas velocity slightly to the right of point D in previous figures.

However, USALT is not known with great confidence and so conservative design leads to operate well to the right of point D with the consequent increase in frictional losses in order to remain in the dilute phase.

A factor suggesting prudence in selecting the design velocity is the fact that the region near to point D is unstable, and slight perturbations in the system may trigger the saltation velocity mode.

If the system consists only of a lift line, the choking velocity becomes the important design parameter.

As previously mentioned, UCH cannot be predicted with confidence either (50% error or higher), and conservative design is necessary too.

In systems using centrifugal blower, characterized by reduced capacity at increased pressure, choking can almost be self-induced. If a small perturbation in the system gives rise to an increase in solids feed rate, the pressure gradient in the vertical line will increase, resulting in a higher back pressure at the blower, and generating a reduced volume flow of gas.

A reduced volume of gas means higher pressure gradient, and the system will soon reach the choking condition.

When this condition appears, the system will rapidly fill with solids and can only be restarted by draining off all the solids.

When selecting the operating gas velocity, the uncertainty in the correlations to predict choking and saltation velocities suggests that a safety margin of 50% or greater is recommended.

Previously derived equations in general apply to any flow of gas-particle mixture in a pipe.

In dilute transport, the gas-to-wall friction is often assumed independent of the presence of the solids and so the Fanning friction factor for the pure gas may be used.

Several approaches to estimating solids-to-wall friction are present in the literature.

As an example, the modified Konno and Saito (Konno, H. and Saito, S. J. (1969) ‘Pneumatic conveying of solids through straight pipes’,Chem. Eng. Jpn, 2, 211–217.) correlation for estimating the pressure loss due to solid-to-pipe friction in vertical transport and the Hinkle (Hinkle, B. L. (1953) PhD Thesis, Georgia Institute of Technology) correlation for estimating this pressure loss in horizontal transport can be applied.

In the case of vertical transport, if CD is the drag coefficient between the particle and gas, we can write:

while for horizontal transport:

Hinkle correlation assumes that particles lose momentum by inelastic collision with the pipe walls.
The pressure loss due to solids-wall friction is then the gas pressure loss as a result of re-accelerating the solids, and the drag force on a single particle can be written as:

If ε is the void fraction, the number of particle per unit of volume pipe is

and the force applied from the gas to the particles is

The presence of bends complicates the design of pneumatic dilute phase transport systems, and when designing a transport system, to use as few bends as possible is usually a good idea.

Bends increase the pressure drop in a line, and they are also the points of most serious erosion and particle attrition.

The centrifugal force encountered by the particles while travelling around the bend pushed solids normally in suspension to move towards the walls.

As a consequence, the particles tend to slow down; they are re-entrained and re-accelerated after they pass through the bend, resulting in the higher pressure drops associated with bends.

A vertical–horizontal pipe configuration tends to increase the erosion and pressure drop effect.

If this type of bend configuration is present in a system, it is possible for solids to remain on the bottom of the pipe for very long distances beyond the bend before they can be re-entrained in air.

For this reason, it is recommended to avoid completely down flowing vertical to horizontal bends in dilute phase pneumatic transport systems.

His study highlighted the effect of a cushion of stagnant particles collected in the blinded branch of the tee, suggesting that the conveyed particles impinging upon the stagnant particles in the tee rather than on the metal surface would result in a mitigated erosion effect.

This was due to the cushioning effect of particles in the blinded branch of the tee, which he observed in a glass bend model.

He also reported that pressure drops and solid attrition rates for the blinded tee were approximately of the same order of magnitude as those observed for bends with radius.

At present there is no reliable method of predicting accurate bend pressure drops other than by experiment for the actual conditions expected.

The rotary valve is the most commonly used device in general industry for feeding materials into pipelines, consisting in a bladed rotor working in a fixed housing.

In many applications in which it is used its primary function is as an air lock, and so it is often referred to as a rotary air lock.

This basic type of valve is generally suitable for free flowing materials.

It is a positive displacement device and so material flow rate can readily be achieved by means of varying the speed of the rotor. 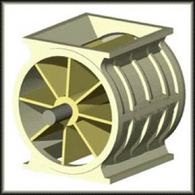 Nonetheless, within the dense phase regime several different flow patterns can occur in both horizontal and vertical transport.

Not all powders exhibit all these flow patterns and within any transport line it is possible to find more than one regime.

Moreover, since the solids are not suspended in the transport gas, it may be possible to operate without a filter at the receiving end of the pipeline, reducing maintenance problems.

B) Low solids velocity means that abrasive and friable materials may be conveyed with minor pipeline erosion or product degradation.

Optimal choice of dense phase transport system depends on the characteristics of the different flow patterns.

The continuous dense phase flow pattern is the most attractive from the point of view of low gas requirements and solid velocities, but with two serious drawbacks:

Saltating flow occurs at a velocity too close to the saltation velocity and is therefore unstable, offering little advantage in the area of gas and solids velocity.

We can consider now the discontinuous dense phase flow pattern with its plugs and dunes.
Performance in this area is unpredictable, as complete pipeline blockages can appear and it requires high pressures.
Most commercial dense phase transport systems operate in this flow pattern incorporating controlling systems of plug length in order to increase predictability and reduce the chance of blockages.

Relationships between pressure drop and plug length are not well known.

Contradictory experimental evidence is reported in the literature.
Konrad (Konrad, K. (1986) ‘Dense phase conveying: a review’, Powder Technol., 49, 1–35.) showed that the pressure drop across a moving plug has been reported to increase:

Klintworth and Marcus (Klintworth, J. and Marcus, R. D. (1985) ‘A review of low-velocity pneumatic conveying systems’, Bulk Solids Handling, 5,(4), 747–753) reported a possible explanation of these apparent contradictions citing the work of Wilson (Wilson, K. C. (1981) ‘Analysis of slip of particulate mass in a horizontal pipe’, Bulk Solids Handling, 1, 295–299) on the effect of stress on the deformation within the plug.