The thermal power exchanged between two fluids kept at constant temperature Tc (hot fluid) and Tf (cold fluid), separated by a solid wall is given by:

where A is the area through which exchange takes place and u is called the global heat transfer coefficient or thermal conductance per unit (W/(m2K)).

The analogy with Ohm’s law allows the introduction of the total thermal resistance Rt linked to the overall heat transfer coefficient using the following formula:

Where s is the wall thickness, k is the wall thermal conductivity, αi and αe are respectively the internal and external convective heat transfer coefficients 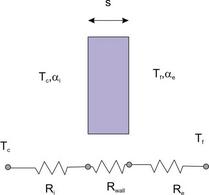 Where in this case s=re-ri is the wall thickness, and is the logarithmic average between internal and external surfaces given by 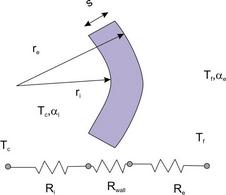 Generally the performance of a heat exchanger degrades during operation due to an accumulation of deposits and fouling on the exchange surfaces.

In a test calculation we can take account of this degradation of the heat exchange by adding two additional thermal resistances in series to calculate the overall thermal conductance.

In the design stage it is difficult to predict the value of these additional thermal resistances, and we prefer not to consider these terms in the overall thermal conductance, but to choose an existing heat exchanger with an exchange area greater than that calculated.

The performance of heat exchangers that are installed is not exactly equal to the design project for a number of reasons, including and the main ones are:

In all these cases the problem arises is to restore the operating conditions of the heat exchanger to those rated by the adjustment.

Generally, the adjustment is obtained by a closed loop system, acting through a regulating organ (usually a valve, in our case) based on the difference between the value of the control variable measured by a sensor (eg the outlet temperature of one of the two fluids) and the set values of that variable.

Devices used for this task (controllers) can be very complex and their design is covered by courses of automatic controls.

The most popular solutions for the regulation of heat exchangers is based on control of the flow rate of one of the two fluids as follows:

In this type of setting the flow rate is controlled by a two-way valve.The efficiency of the exchanger is controlled by acting on the ratio Cmin / Cmax, on the value of NUT (if the flow is adjusted to Cmin) and on the global exchange coefficient due to the change of flow rate of one of the two fluids.

This adjustment is a dissipative type as the valve introduces a further pressure drop which increases the required pumping  power compared to the same flow rate without a valve.

This scheme has the lowest installation costs, compared to other control solutions, but the adjustment range (which depends upon the characteristics of the valve and of the pump) is usually quite limited. 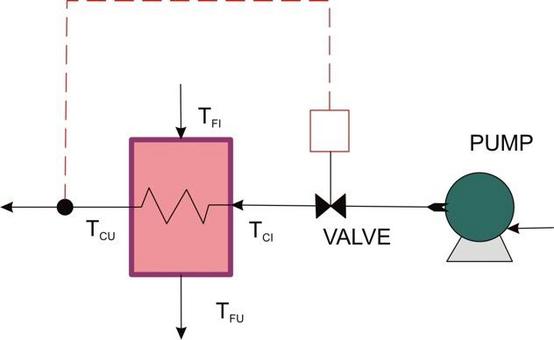 To obtain the same effect as in the previous case without introducing additional losses, we can use a variable speed pump.

The speed of rotation, generally driven by a single or three phase asynchronous electric motor, can be controlled intermittently by electronic circuits (this solution is not suitable for closed loop control) or continuously via an inverter.

The costs are generally higher than in the previous case. 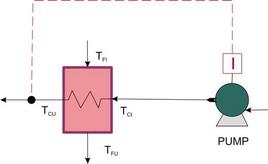 This solution introduces an AB junction (or bypass) of the circuit, and uses a three-way mixing valve: this valve mixes two incoming flow to obtain an outflow whose flows rate is constant.

In this way, the exchanger operates at a constant flow rate, but with temperature input variable depending on the amount of fluid circulating in junction AB.

In this case the heat exchanger operates at variable flow, but with constant inlet temperature.

The same pattern can be achieved by including a mixing valve at the output of the heat exchanger, which is cheaper.

This solution is preferable when you do not want to change the average temperature of the surface exchange by very much.

Note that in each case of bypass adjustment, the pump is placed on the branch of the circuit where the total flow circulating (constant) does not vary with respect to the operating point .