The true composition of a mixture µ is often not known but an estimate y may be found by sampling.

If we have N samples of composition y1 to yy in one component the estimate of the mixture composition is given. 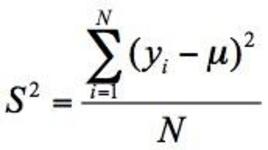 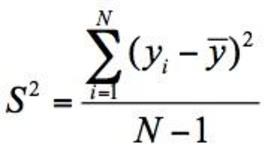 Theoretical limits of variance.
For a two-component system the theoretical upper and lower limits of mixture variance are:

Where p and (1-p) are the proportions of the two components determined from samples and n in the number of particles in each samples.
Actual values of mixture variance lie between these two extreme values

A measure of the degree of mixing is the Lacey mixing index (Lacey, 1954).

Test for precision of mixture composition and variance.

where t is from Student’s t-test for statistical significance. The value of t depends on the confidence level required.

For example , at 95% confidence level, t=2.0 for N=60, and so there is a 95% probability that the true mean mixture composition lies in the range y±0.258S.
In other words, 1 in 20 estimates of mixture variance would lies outside this range.

Variance
a) When more than 50 samples are taken (i.e. n>50), the distribution of variance values can also be assumed to be normal and the Student’s t-test may be used. The best estimate of the true variance σ2 is then given by: (fig. 1).

The standard error of the mixture variance required in this test is usually not known but is estimated from: (fig. 2).

The standard error decreases as 1/√N and so the precision increases as √N.

b) When less than 50 samples are taken (i.e. n>50), the variance distribution curve may not be normal and is likely to be a Χ2 (chi squared) distribution. In this case, the limit of precision are not symmetrical. The range of values of mixture variance is defined by lower and upper limits: