Separation operations can be classified into four groups:

In the sedimentation process two immiscible liquids, or a liquid and a solid of different densities are separated under the action of gravity force, allowing them to reach a steady state in space, with the heavier one stratifying under the lighter one;

Filtration is a solid-liquid separation obtained by a forced insertion of the mixed flow through a porous membrane whose cut-off scale is tuned in order to let the fluid flow and to retain the solid component.

Sieving is achieved through a combination of filter barrier and vibration. In this way larger elements are retained.

It is often used for particle granulometric classification.

In the mechanical separation of particles from a fluid, the forces acting on these particles are used as separation principle.

The forces can be directed to direct immobilization of some components, such as the sieving and filtration, or they can operate indirectly, as in the impinging filters.

These forces may originate from the gravitational or centrifugal effects, the latter one can be thought of as an adverse effect immobilization of the particles, obtained by moving the particles which are heavier than the liquid that contains them.

The action of separation depends on the nature of the particles that must be separatedand by the forces that cause the separation.

Under the action of a constant force, e.g. gravity, the particles in a liquid tend to accelerate for some time and then they remain at a uniform speed.

This speed is called limit speed, and it depends on the size, density and shape of particles and the properties of the fluid in which they are immersed.

The resultant force is the difference between the external force applied by reaction and the resistance exerted on the particle by the surrounding fluid, which is also subject to the applied force, so that it results for the external force: (1);

where V is the volume of the particle. The resistant force Fd on the particle is obtained by multiplying the dynamic component of the fluid pressure on the projection area (useful section) of the particle: (2).

CD is called drag coefficient, f is the fluid density, v is the velocity of the particle and A is the projected area of the particle relative to the direction of progress. If the forces acting on a particle of spherical shape whose volume is equal to (3);

where D is the diameter of the particle, assuming Fs = Fd, transforming the speed v in the speed limit vm by imposing the dynamical equilibrium we obtain: (5).

In the case of laminar motion of a sphere, the drag coefficient can be expressed as (6).

Substituting the value of CD and rearranging the terms we obtain the expressionthe speed limit in the form: (7)

Sedimentation uses gravity to separate particles from the fluid.

The particles are usually solid but they may be small droplets of a different density liquid (oil), and the fluid can be either a liquid or a gas.

Sedimentation is often used in the food industry for the separation of dirt and debris from incoming raw materials, crystals from their liquor and dust particles or other products by air flows.

In settling, the particles settle under the force of gravity, and the equation is called the Stokes law: (8).

The Stokes law in this form only applies to the laminar case, defined as Re ≤ 2, while in the case of transitional or turbulent motion a more complex expression for the coefficient of resistance should be used.

The law provides for a proportionality between Stokes sedimentation rate compared to the square of the diameter of the particles.

In concentrated suspensions, we found that all the particles settle at rates roughly constant, once it has reached a sufficiently high level of concentration.

When the particle size range is between 10:1 (ratio between Dmax and Dmin), all particles tend to settle at the same speed.

This speed is compressed between the maximum and minimum expected through the evaluation of Stokes law for various diameters.

In practical cases, where the Stokes law is not valid, the experimental verification will assist in determining the rate of deposit.

A solid settles into a liquid whose density is less than its own; at low concentrations, the Stokes law is valid, but in many practical cases the concentration is too high.

If we consider a cylinder in which there is uniform suspension in which the sediment is made optically transparent, several well defined areas will appear.

On top , a very distinct and clear liquid area appears, followed by the most turbid one with sediment particles, while the solid sediment is at the base.

The equipment for separating solids from liquids through gravity settling are designed to provide a fluid residence time long enough for the occurrence of sedimentation and to allow for removal of the supernatant (liquid part without suspension) and the sediment without disturbing the separation process.

Typically a continuous flow through the device is preferred, so that the speeds are low enough to avoid disturbing the sediment.

There are tanks with different configurations of shape, all with a cross section large enough to maintain low speeds, scrapers fitted with low-speed conveyors and pumps to remove the sediment. 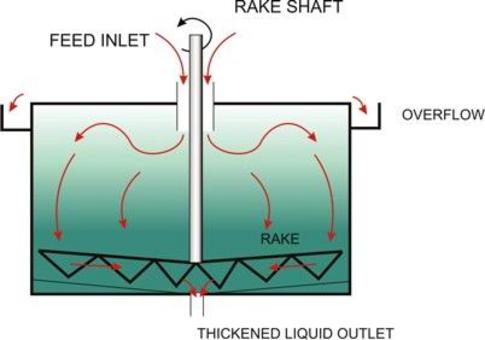 Separation by sedimentation of two immiscible liquids or a liquid and a solid, depends on the effect of gravity on the components.

Sometimes the separation can be very slow, for example if the difference between the specific weight of the components is minimal, or because of forces that hold the components united, as in the case of emulsions.

Moreover, even when the separation is present, it is not always possible to obtain a clear demarcation of the layers.

A much more energetic effect can be obtained by using the centrifugal action, in machines called centrifuges.

The driving force of the process is given by the centrifugal force acting on both the liquid and on the particles in suspension.

There are many types of centrifuges that can be classified into two main groups: