When a powder containing an appreciable proportion of particles under 50 mm is charged into a storage vessel or hopper, air is displaced upwards.

The upward velocity of this air may exceed the terminal freefall velocity of some of the finer particles, which may then remain in suspension after the larger particles have settled to the surface of the hopper contents

For particles in this size range in air the terminal freefall velocity will be typically of the order of a few centimeters per second and will increase as the square of particle diameter (e.g. for 30 μm sand particles the terminal velocity is 7 cm/s).

Thus a pocket of fine particles is generated in the hopper each time solids are charged. 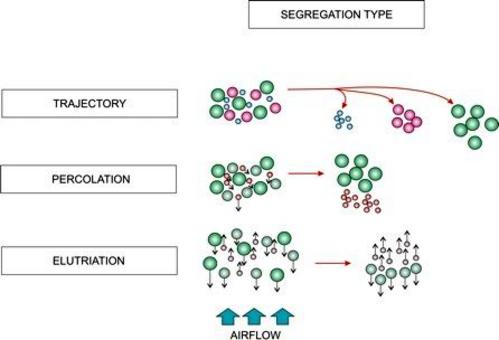 If particles are to be mixed, starting out from segregated groups and ending up with the components randomly distributed, the expected variances (s2) of the sample compositions from the mean sample composition can be calculated.

In the unmixed state virtually all small samples taken will consist either of pure P or of pure Q.

From the overall proportions, if a large number of samples are taken, it would be expected that a proportion p of the samples would contain pure component P.

Their deviation from the mean composition would be (1 – p), as the sample containing pure P has a fractional composition 1 of component P.

Similarly, a proportion q of the samples would contain pure Q, that is, a fractional composition 0 in terms of component P and a deviation (0 – p) from the mean.

When the mixture has been thoroughly dispersed, it is assumed that the components are distributed through the volume in accordance with their overall proportions.

The probability that any particle picked at random for component Q will be q, and (1 – q) that it is not Q.

Extending this to samples containing N particles, it can be shown, using probability theory, that: (fig).

This assumes that all the particles are equally sized and that each particle is either pure P or pure Q.

For example, this might be the mixing of equal-sized particles of sugar and milk powder.

The subscripts o and r have been used to denote the initial and the random values of s2, and inspection of the previous formulae shows that in the mixing process the value of s2 has decreased from p(1 – p) to 1/Nth of this value.

It has been suggested that intermediate values between so2 and sr2 could be used to show the progress of mixing.

Suggestions have been made for a mixing index, based on this, for example.

which is so designed that (M) goes from 0 to 1 during the course of the mixing process.

This measure can be used for mixtures of particles and also for the mixing of heavy pastes.

For a particular process operation, we desire to mix dough in 93 kg batches and then at a later time further blend in 7 kg of yeast.

A uniform distribution of yeast is required, and in order to control the product uniformity the mixing index is computed after 4 and 8 min of mixing.

Sample yeast compositions expressed as the percentage of yeast in 50 g samples were found to be: (fig.). 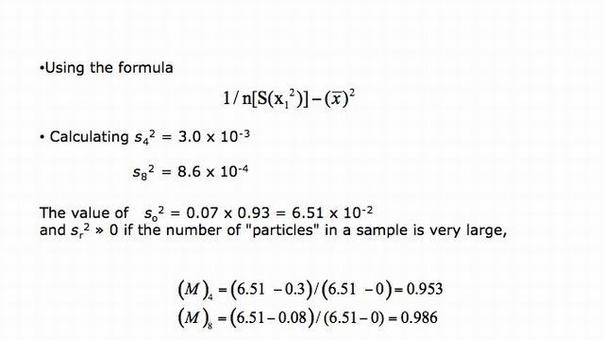 The mixing of particles with strong variations in size or in density presents special problems, due to the effect of gravitational forces acting in the mixer which will tend to segregate the particles into size and density ranges.

Initial mixing may then be followed by slow gravitational un-mixing, and the time of mixing may be quite critical.

Mixing is simplest when the quantities that are to be mixed are roughly in the same proportions.

In cases where very small quantities of one component have to be blended uniformly into much larger quantities of other components, the best procedure is to split the mixing into stages, keeping the proportions in a reasonable ratio in each stage.

For example, if a component needs to be blended in its final proportions in relatively small fractions like 50 parts per million, it is almost impossible to mix both components in a single stage.

A possible solution might be to use multiple mixing stages, starting with the added component in the first step at about 30:1 ratio.

In planning the mixing process it would be wise to take analyses through each stage of mixing: once mixing times have been established it should only be necessary to sample and check the final product.

Mixing flavors into a powdered beverage

It is desired to mix a powder F at the level of 10-5 % by weight into a 1 ton batch of a main ingredient R.

Both will mix correctly as long as the minor constituent constitutes not less than 10%.

Using a suitable mixing index, it is possible to evaluate the rate of mixing.

Assuming that, under constant working conditions at constant speed in a well-designed mixer, the mixing index ought to be proportional to the extent of mixing remaining to be done at that time, it results: (fig 1)

This exponential relationship applies in many experimental investigations at least over two or three orders of magnitude of M.

In such cases, the constant K can be related to the mixing machine and to the conditions and it can be used to predict, for example, the times required to attain a given degree of mixing.

In shear mixing, shear stresses give rise to slip zones and mixing takes place by interchange of particles between layers within the zone.

Diffusive mixing occurs when particles roll down a sloping surface.

Convective mixing is obtained by deliberate bulk movement of packets of powder around the powder mass.

In free-flowing powders both diffusive mixing and shear mixing give rise to size segregation and so for such powders convective mixing is the major mechanism promoting mixing.

A tumbling mixer comprises a closed vessel rotating around its axis. Common shapes for the vessel are cube, double cone and V.

The dominant mechanism is diffusive mixing.

The quality of mixture achievable with such powder in tumbling mixers is limited due to the segregation effect in free-flowing powders.

Baffles may be installed in an attempt to reduce segregation, but have little effect.

In convective mixers circulation patterns are obtained within a static shell by using rotating blades or paddles.

The main mechanism is convective mixing, although accompanied by some diffusive and shear mixing.

One of the most common convective mixers is the ribbon blender, in which helical blades or ribbons rotate around a horizontal axis in a static cylinder.

Rotational speeds are typically less than one revolution per second.

An effective convective mixer is the Nautamix, a conical mixer with helical auger arm in which an Archimedean screw lifts material from the base of a conical hopper and progresses around the hopper wall.

The operating principle of this type of mixer relies on the natural mobility of particles in the fluidized bed surrounded by an airstream.

The mixing is obtained mainly by convective motion with the circulation patterns defined by the bubble motion within the bed.

An important feature of the fluidized bed mixer is that several processing steps (e.g. mixing, reaction, coating drying, etc.) may be carried out in the same vessel.

In the high shear mixers the emphasis is on breaking down agglomerates of cohesive powders rather than breaking individual particles, and the dominant mechanism is shear mixing. 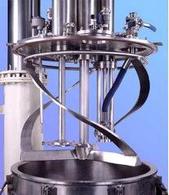