Definition. Formally, a real-valued function f defined on an interval [a,b] is called concave if, for any two points x and y in its domain and any t in [0,1], we have:

This definition merely states that for every z between x and y, the point (z, f(z)) on the graph of f is above the straight line joining the points (x, f(x)) and (y, f(y)). 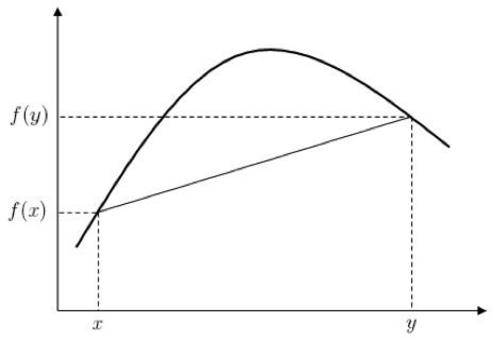 Suppose that f is differentiable two times on an interval [a,b].

and determine its graph.

We can skip this step for now since the roots are so complicated.

(Step 2). Monotonicity.
To apply the first derivative test for extrema, we solve the following inequality:

Then, applying the first derivative test for extrema, we say:

Showing that the horizontal and oblique asymptotes for the graph of f do not exist.
(Step 4.) Assemble monotonicity data

(Step 3). Concavity.
To apply the first concavity test for inflections, we solve the following inequality:

and evaluate the sign of f”.
(Step 4.) Assemble concavity data 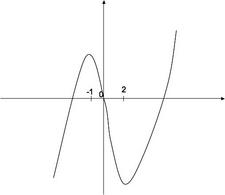 and determine its graph.

1. Functions and their graph. One–one and onto functions. Composite and inverse functions.

4. Domain of a given function

9. Higher Order Derivatives. Applications of differentiation: local and absolute extremes of a function