Francesco Giannino » 1.Functions and their graph. One–one and onto functions. Composite and inverse functions.

in which x is called argument (input) of the function f and y is the image (output) of x under f.

A single output is associated to each input, as different input can generate the same output.
The set X is called domain of the function f (dom f), while Y is called codomain (cod f). The range (or image) of X, is the set of all images of elements of X (rng ƒ). Obviously

indicates that ƒ is a function with domain X and codomain Y.

In particular, if x and y are real numbers, G(f ) can be represented on a Cartesian plane to form a curve. A glance at the graphical representation of a function allows us to visualize the behaviour and characteristics of a function.

Functions and their graphs: preimage

Given ƒ:X → Y, the preimage (or inverse image, or counter image) of a subset B of the codomain Y under ƒ is the subset f-1(B) of the elements of X whose images belong to B, i.e 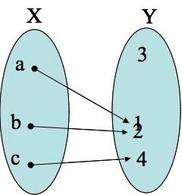 Take, for example, the equation

Note that the points (0, 2) and (0, -2) both satisfy the equation.  So we have a situation in which one x-value (namely, when x = 0) corresponds to two different y-values (namely, 2 and -2).  The points (0, -2) and (0, 2) lie on the same vertical line with equation x = 2 on the Cartesian coordinate system.
So if a vertical line hits a curve in more than one place, it is the same as having the same x-value paired up with two different y-values, and the graph is not that of a function.
(Thus, a circle is not the graph of a function).

We see that we can draw a vertical line, for example the dotted line in the drawing, which cuts the circle more than once.

Therefore the circle is not a function. 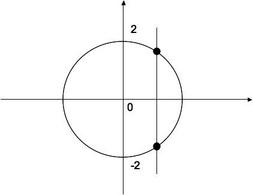 Example 1. Does this graph pass the vertical line test?

Solution. It passes the vertical line test.  Therefore, it is the graph of a function. 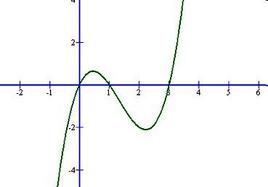 Example 2. Does this graph pass the vertical line test?

be a function whose domain is a set X. The function f is injective if

Solution. Applying the horizontal line test, draw a line parallel to x-axis to intersect the plot of the function as many times as possible.

We find that all lines drawn parallel to x-axis intersect the plot only once. Hence, the function is one-one. 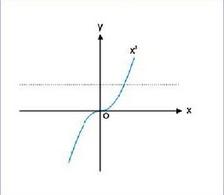 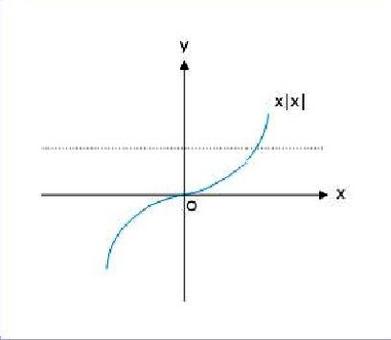 Solution. We can solve

to decide the function type.
Then

that is not exclusively equal to

. Hence, given function is not a one-one function, but a many – one function.

The conclusion is further emphasized by the intersection of a line parallel to x-axis, which intersects function plot at two points. 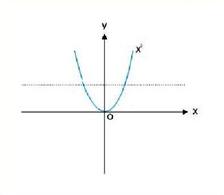 Solution. The given function is a rational function. We have to determine function type.
We evaluate function for

equation yields multiple values of x, then function is not one-one. Then,

. It means pre-images are not related to distinct images. Thus, we conclude that function is not one-one, but many-one.

A function is an onto function if its range is equal to its co-domain. Onto functions are alternatively called surjective functions.

be a function whose domain is a set X. The function f is an onto function if and only if for every y in the co-domain Y there is at least one x in the domain X such that

Decide whether f is an onto function.

Solution. We can apply the definition to verify if f is onto.

is a bijection if the function is both one-one and onto and has the property that every element y ∈ Y. corresponds to exactly one element

. Then, if it exists, the inverse of ƒ is the function

, defined by the following rule:

Not all functions have an inverse. For this rule to be applicable, each element

must correspond to exactly one element y ∈ Y .

Most functions encountered in elementary calculus do not have an inverse.

is both one-one and onto, so the function f has the inverse function

We construct an inverse rule in step-wise manner:

Step 1: Write down the rule of the given function

.
Let the given rule be

This relation gives us one value of image. For example, if

Replace x which now represents image by the symbol

and replace y which now represents independent variable by x. For the given function,

, the new inverse rule is:

is not one-one, so the function

does not have the inverse function

is not one-one, so the function f does not have the inverse function

Observe that set B is common to two functions. The rules of the functions are given by f (x) and g (x) respectively. Our objective here is to define a new function

Thinking in terms of relation, A and B are the domain and codomain of the function f. It means that every element x of A has an image f (x) in B.
Similarly, thinking in terms of relation, B and C are the domain and codomain of the function g.
In this function, f (x) which was the image of pre-image x in A is now pre-image for the function g. There is a corresponding unique image in set “C“. Following the symbolic notation, f (x) has image denoted by “g(f (x)) ” in “C”. The gure here depicts the relationship among three sets via two functions (relations) and the combination function.

Function composition is a special relation between sets not common to two functions. 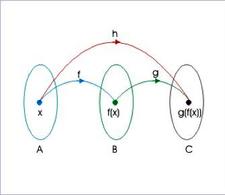 For every element x in A, there exists an element f (x) in set B. This is the requirement of function f by definition. For every

By convention, we call this new function as

and is read “g composed with f“.

The two symbolical representations are equivalent.

Solution. According to definition,

Again, according to definition,

It indicates that composition of functions is not commutative.

Let there be two functions denoted as :

Clearly, if this condition is met, then composition

And, if both conditions are met simultaneously, then we can conclude that both

This is usually possible when all sets involved are sets of real numbers.

Check whether and exit for the given functions?

Solution. Here we have,

This means that both compositions

exist for the given sets.

1. Functions and their graph. One–one and onto functions. Composite and inverse functions.

4. Domain of a given function

9. Higher Order Derivatives. Applications of differentiation: local and absolute extremes of a function