We begin this course by asking ourselves “what is Architecture?”
First, we are going to look for our answer in our cultural tradition, looking at “rhetorical” definitions (built with care and designed to please) which have been produced over the centuries and approved by the academic world.
We will steer our research away from the rhetoric of verbal and conceptual language towards the rhetoric of iconography. In this way, we will see how architecture is represented in images (by allusion or analogy, emphasis or hyperbole, through metaphors or metonyms, personification or comparison) when the aim is to celebrate its social and cultural authority.
We will go straightaway to an allegorical image of architecture, a particularly nice one, which has been famous throughout history.
We will then go back to verbal language and explore the different and complex meanings that the term “architecture” denotes.
Over the course of the lessons we will reflect on, and try to grasp, what is meant by the term “architecture” and assess its current value as actual nourishment for our imagination. We will forget our awareness of history and conceptual certainties, and try to look at architecture in a more “physical” way.

Different stages of the agogic journey (touched on in this lesson)

Non-verbal language (used or mentioned in the lesson)

References to other disciplines (used or mentioned in this lesson)

Rhetorical devices (used or mentioned in the lessons)

The term “allegory” has two roots: “allos“=other and “agoreuo“= public speaking.
We can compare the greek term “agorà“= public space, and the latin one “grex“= flock, group.
The rhetorical term “allegory” means representing an idea through the use of a character, a device which is especially popular in public speaking.
“Allegory” means “using another way to say what you want to say in public“.
…..
Marc-Antoine Laugier in his introduction to Essai sur l’Architecture (1755) refers to architecture as a woman who is both educated (reclining on a bed of archaeological finds) and sophisticated (she is elegantly dressed), pointing out to a winged child how a tree’s branches intertwine.
If we decode the allegory and translate the image into words we could say that “Architecture is an Art whose origins lie in Nature“.

“Art” is something which is done with our hands; the erect posture in humans freed the anterior limbs (“arti” in Italian) from their locomotor function enabling them to specialize in manipulation and precision tasks. Words which are related to the term “art” are the names of objects like “arms”, and concepts like “harmony” and “order”. 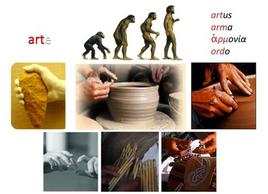 Etymology of the word "art". Images modified by Donatella Mazzoleni.

The word “architecture” is made up of two parts:
The part “-tecture“, from the latin (tectura), is based on the indo-european root tekt, which can be found in:

The “archi-” part, which is Greek in origin (arché), contains the indo-european root arch, whose meaning is related to the abstract idea of origin and principle but also excellence. 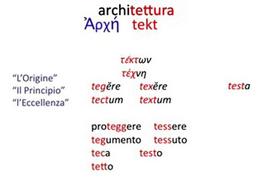 Etymology of the term "architecture". Illustration by Donatella Mazzoleni.

Once we are aware of the etymology and therefore the complex, multi-layered meaning of the word we have given to our subject “architecture” we can say that architecture (Arché + Tekt) responds to two different types of needs:

The construction of meaning is achieved through a cascade of formulated mirror-images.
When we perceive the similarity between the different protective layers it activates our analogic thought processes making it possible to bestow meaning on the place we live in, and this in turn makes it possible for us to enjoy its beauty…

The two souls of architecture

With its material and immaterial aspects, architecture is revealed as having two souls:

Architecture can therefore be used as a powerful ambassador for peace which operates across all cultures regardless of identity, race, creed or government as it is rooted in universal human values.
However, it can also act as a powerful language for war challenging differences of identity, race, creed and government, because it emphasizes their main values which are in competition with each other.

The two main actions of architecture

Architecture is achieved through two simple actions which form the basis of every project and build: 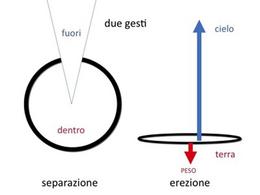 The two actions of architecture. Diagram by Donatella Mazzoleni.