In this lesson, we will deal with a central element of New Labour’s electoral campaign in 1997 and at the heart of its political ‘revolution’ : education. The focus on the political and innovating impact of educational policies had been prepared well before 1997. Communicating Britain’s Future in 1995 and the party documents issued in 1996 – Life Long Learning (Labour Party, Coventry), Learn as You Earn. Labour’s Plans for a Skills Revolution, and Getting Welfare to Work – already established a close connection between the goals of the education system and the needs of a knowledge–based global economy. IT and computing skills are emphasised as the main instruments to bridge the gap between school and business. In New Labour’s discourse, we will see that the ideas of education and learning are constantly construed as skill-training processes, designed to build a well-disciplined and efficient workforce.

From Education to Business (1: Schools)

Schools
“We will also wish to see schools developing as a local computing and communications resource for their community, offering services, training and guidance to local businesses and firms, and making training courses available commercially”.

Higher education
“Higher and further education institutions should become ‘centres of expertise’ whose intellectual resources can be drawn on by national and international businesses”.

From Education to Business (2: Universities)

“The proposals Labour has already advanced for the creation of a University for Industry – bringing education and training to the workplace, through the use of interactive technology – will also be vital in developing new skills for a new economic age”.

“I am also passionately committed to the idea that education must be available throughout people’s lives”.
(Tony Blair, Campaign speech 16 DEC 1996)

“The passion of a government I lead will be education. This is because a just and a strong economy depends on the excellence of education we provide to all children”
(Tony Blair, Campaign speech 3 FEB 1997)

The ‘marriage’ of education and technology

“Education will be the passion of my government. My three priorities will be Education, Education and Education.
Education will be Chapter Number one in our Manifesto.
It will be Priority Number One in Government.
It will be Number One in a Labour Queen’s Speech.
It is now almost two years since I set out our vision of Britain on the Information Superhighway. I am convinced that the marriage of education and technology represents one of the great opportunities for government in the 21st century”.

“Stripped to its bare essentials, an economy has three resources at its disposal – raw materials, plant and machinery, and the skills of its workers. And the most important of these, especially in the modern world, is the last. Raw material are certainly significant, but many economies have flourished without them. Plant and machinery are crucial, but in the era of open global capital markets, even that can be acquired from abroad. But without a skilled workforce, the people with the ability and knowledge to staff a modern economy, that economy is nowhere. Global firms may invest in countries with unskilled labour, but workers will be paid accordingly. Education and economic growth go hand in hand, the one making the other possible“.

“In today’s world there is no more valuable asset than knowledge. The more you learn, the more you earn. It’s as simple as that. Education is an economic imperative. The more skilled you are, the more knowledge and expertise you have, the higher your standard of living, and the more likely you are to have security at work”.

“If we are successful in facing this challenge the school of the future will be fundamentally different to the learning of the past. IT will become an aid to teaching not a substitute for it, with basic skills learnt at the earliest possible stage and technology enhancing opportunities, for accessing information, for sharing resources and good practice and for preparing for employment in the 21st century. [...]

Partnership with business and commerce would also be crucial to achieving our goal. Many schemes for drawing on the expertise of private companies in the information technology field, already exist. For instance here in Sheffield, BT worked with Sheffield Hallam University and Sheffield college to develop an in-service training initiative for teachers which included video-conferencing. [...]

We have the policies which will raise standards in education. We have the will to implement them. Unlike the Conservatives we know that knowledge and skills are the currency of the 21st century. Tony Blair has been quite clear – education will be the passion of this Labour government. My job will be to ensure that cynicism is turned to hope and that promises are made into reality”

(David Blunkett, speech at the North of England Education Conference in Sheffield, January 1997)

“Education is our country’s priority. It holds the key to our future. But the Government must be satisfied that resources in education are going direct to learning in the classroom. The Secretary of State for Education will bring forward proposals so that every school can meet standards for results and discipline.[...]
The windfall tax I have announced will finance the measures I have announced for employment and training. But there is nothing more important to the training of young people than what happens in our schools.
Indeed many of the problems our Welfare to Work programme must now address start in school. We cannot run a first rate economy on the basis of second rate education. In general economic success tomorrow will depend on investing in our schools today. [...]
Today 1 million pupils are being educated in classrooms built before the first world war. If our schools are to educate for the needs of the twenty first century economy they must themselves become schools fit to learn in and equipped for the twenty first century. And by encouraging schools to engage in Public/Private Partnerships, the public investment we make can lever in even more resources to renovate our schools.
I want schools not just to repair the roofs and the fabric but to acquire the equipment and computers they need. So I have decided to allocate cash from the proceeds of the windfall tax for an immediate programme of capital investment to equip our schools with the infrastructure, the technology, and the bright modern classrooms they need“.

From industrial to education policies 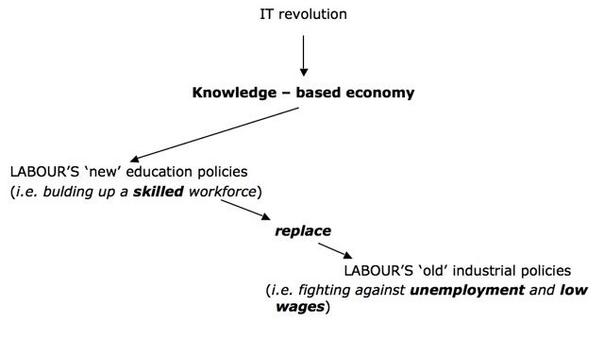 “The UK government has encouraged a largely functional account of education – ‘the more you learn, the more you earn’. But as well as rising basic standards in education, there is also evidence of more mental illness and behavioral problems among children. Rather than an education that merely prepares children for our imperfect society, we need one that helps children develop their own sense of worth”.

“Furthermore, performativity in education, according to Lyotard (1984, pp. 57–59, The Postmodern Condition), has been subsumed under the performativity of the wider social system because education is required to create the skills which are indispensable if the wider social system is to perform efficiently. These skills are of two kinds: those that contribute specifically to enable a country to participate in the markets of world competition and those that contribute to maintaining internal cohesion and legitimation. Thus, education is not to pursue or to produce ideals, or to provide an elite capable of guiding a society or nation towards emancipation but, instead, to “supply the system with players capable of acceptably fulfilling their roles at the pragmatic posts required by its institutions”. (pp. 57–59)

The role of educational institutions (Marshall 1999)

“Consequently universities are no longer ‘democratic’ institutions, modeled along emancipationist/humanist lines as they have undergone realignment to the performance of the wider social system. [...]

What I wish to pursue here is not Lyotard’s notion of performativity but how students are being changed; in Lyotard’s terms, they are “no longer from the liberal ‘elite’ more or less concerned with the great task of social progress, understood here in terms of emancipation” (Lyotard, 1984, p. 59). It is educational institutions that change people away from the former liberal humanist ideals to people who, through an organized stock of professional knowledge, pursue performativity through increasingly technological devices and scientific managerial theories“.

“On 19 November 1997, following proposals in the education White Paper, Excellence in Schools, the Secretary of State for Education and Employment [David Blunkett] pledged ‘to strengthen education for citizenship and the teaching of democracy in schools’, and to that end set up this Advisory Group with the following terms of reference:

“To provide advice on effective education for citizenship in schools – to include the nature and practices of participation in democracy; the duties, responsibilities and rights of individuals as citizens; and the value to individuals and society of community activity“.
…

Home and away? The political economy of new labour

Why don't we have kids any more?