In this first lesson, we will mention some core concepts to understand the ideological transformation of British Labour Party in the last two decades and Labour landslide victory in 1997.
We will see that a new critical awareness of globalization phenomena (A. Giddens) is essential to comprehend the political innovation represented by the so called “third way” approach in the 90s.

New Labour: from socialism to social-ism

From Labour to New Labour (1)

From Labour to New Labour (2)

From Labour to New Labour (3)

“The overal aim of third way politics should be to help citizens pilot through the major revolutions of our time: globalization, transformation in personal life and our relationship to nature. Third way politics should take a positive attitude towards globalization – but crucially only as a phenomenon ranging much more widely than the global marketplace [...]
Third way politics should not identify globalization with a blanket endorsement of free trade. Free trade can be an engine of economic development, but given the socially and culturally destructive power of markets, its consequences need always to be scrutinized”.
(A. Giddens, The Third Way. The Renewal of Social Democracy, 1999, p. 65)

A friend of mine studies village life in central Africa.
A few years ago, she paid her first visit to a remote area where she was to carry out her fieldwork.
The evening she got there, she was invited to a local home for an evening’s entertainment. She expected to find out about the traditional pastimes of this isolated community.
Instead, the evening turned out to be a viewing of Basic Instinct on video. The film at that point hadn’t even reached the cinemas in London… 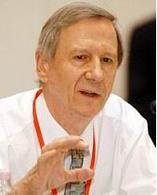