The arrival point of the entire Roman juridical experience was the great codificatory project by Justinian, who succeeded the throne of Constantinople in 527 A.D. and immediately earned a reputation as a charismatic and ambitious Emperor, and a tireless reformer. 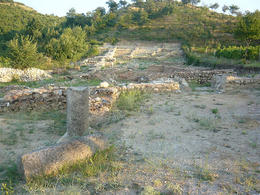 Tauresium, an ancient town and the birthplace of Eastern Roman (Byzantine) Emperor Justinian I, located today in the Republic of Macedonia. (Image supplied by the author)

Justinian was inspired by the immense ancient Roman imperial model and so set about re-establishing the military, political and religious Roman supremacy starting by reconquering the territories occupied by the Barbarians (e.g. Italy and Northern Africa).
In the name of a renovatio imperii (imperial renovation) also from a cultural point of view, he decided to reform the entire juridical system keeping to the traditions of the ancient jurists. Therefore his choice of Latin, over his usual language Greek.

As always the same problems arose: the uncertainty of law and the extreme time-consuming trials. 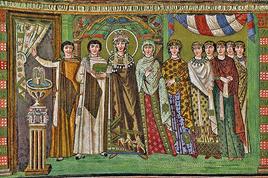 Teodora and her court. (Image supplied by the author)

Claiming the central role of the Emperor, in producing and interpreting law, as soon as he ascended to the supreme power in 527 A.D., after only one year he passed his first code called Justinian, which has been lost in time.

Teodora. (Image supplied by the author)

This was followed by a second edition in 534 A.D., divided into 12 books, which fortunately exists today.

Emperor Justinian reconquered many former territories of the Western Roman Empire, including Italy, Dalmatia, Africa, and southern Hispania. (Image supplied by the author)

In the meanwhile he organised an exceptional staff, including Tribonian (his quaestor sacri palatii) to whom he commissioned a large collection of iura.
After only three years in 533 A.D., the 50 books of Digesta were ready for publication: taking pride in his exceptional work, he ordered that nobody dare intervene or change the texts, under threat of criminal punishment.

The Justinian project had a practical ambition, that of replacing all previous codes with a clear and precise one. Only the Iura which were included in the Digesta had to be considered applicable law, as if they had been passed by Justinian himself.
The ‘Law of citation’, which we can find in the first Justinian Code, is eliminated in the second one, as it is useless: in the Digesta there are all citable jurists’ opinions, with no classification of importance.
The committee members had the power to correct, amend and adjust the Iura to give them uniformity.

During his reign, Justinian relentlessly passed laws (Novellae), which were written in Greek. 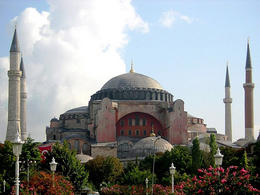 According to some modern day scholars, the aim of this part of the project was for study purposes, rather than practical ones. 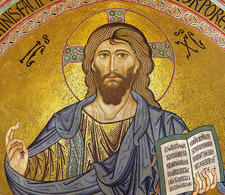 Pantocrator of Cefalù (Sicily). (Image supplied by the author)

To obtain a position in the imperial court or to partake in an administrative career, it was necessary a preparation at law school, the most important of which were in Constantinople, Beirut and Rome.
To these students Justinian dedicated a handbook (Justiniani Institutiones) based on the very famous book by Gaius (Gai Institutiones) and reformed the law school syllabus.

The complete works commissioned by Justinian (Codex; Digesta; Institutiones; Novellae), called in the Middle Ages Corpus Iuris Romani, were the beginning of a new dawn, that of the Byzantine Empire, destined to last until 1453 A.D.
During this long millenium, Justinian’s Corpus iuris was the foundation of Byzantine law. 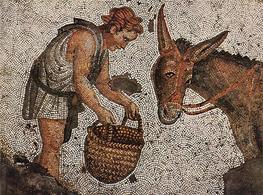 Scene from daily life on a mosaic from the Great Palace of Constantinople, early 6th century. (Image supplied by the author)

In the ninth century A.D., Emperor Leo VI the Wise of the Macedonian dynasty, commissioned the Basilika, a great work in 60 books, re-elaborating Justinian’s juridical material, gathering the connotations and the translations from law schools in the Orient.