Francesca Galgano » 1.Institutions - The foundation of the city

From 9th to 6th century B.C. Etruscans, Samnites, Sabines and Latins were the main ethnic groups in Italy.
The first settlement of Rome was on the hills of Palatine (Latins) and of Quirinal (Sabines).
It is difficult to say what is true in Livy’s History about this period, in which legend and history mingle. 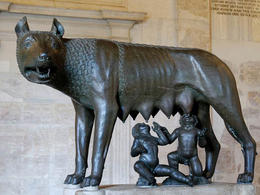 Lupa Capitolina: the statue depicts a she-wolf suckling Remus and his twin brother Romulus, who is said to have founded Rome (bronze, 12th century A.D.; the twins are a 15th-century addition). (Image supplied by the author)

The foundation of Rome has the conventional date of 21st April 754 B.C., but the real appearance of the city was not before 6th Century B.C. Its origins were humble and labourious. The first nuclei were three tribes of Tities (Sabines), Luceres (Etuscans) and Ramnes (Latins), then each divided into 10 districts (curiae), then again in 10 decuriae. The chief was possibly an elected rex, who was surrounded himself with a council of 100 elders (patres).
The curiae were religious and military groups, whose numbers increased, in time, up to 30, as the Latin city grew.
The curiae had a territorial dimension. The male population was divided by units of lineage. They had in total 3000 soldiers, 100 men for each curia, which included 10 knights each (300 knights in total).
They represented not only the first military force, but also the great citizens’ assembly (comitia curiata), which were summoned for important decisions and events of the community, such as the election of the rex, declaration of war and peace, and so on.
The curiae still existed in latter Rome with their important political function, by which they conferred a magistrate, and then the Emperor, his executive power by the lex curiata de imperio.

In 600 and 500 B.C. the Etruscan domination in Italy was great and powerful: there was a league constituted by several cities, some of which at coastal locations.
They worked copper and iron; cultivated the land (olive and grain); had an active textile industry; performed as engineers (aqueducts, drains). They traded with Greece, with Greek colonies in Southern Italy and with Phoenician cities. But their activities as pirates rather than merchants placed them in conflict with Greece. Between 500 and 400 B.C. the Samnites and the Greek tyrants of Sicily opposed themselves to the Etruscan southward expansion. 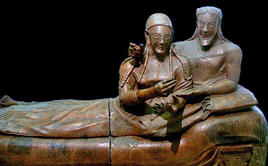 The Sarcophagus of the Spouses is a late 6th century B.C. Etruscan anthropoid sarcophagus, actually exhibited in the National Etruscan Museum of Villa Giulia, Rome. (Image supplied by the author)

In central Italy there were the Latins, who tried to block the Etruscan ambitions on the peninsula. Although Latium was not attractive due to the humid climate, it had a strategic location along the trade routes from Etruria to Ancient Greece. The Etruscans managed to create a strong sphere of influence on the Latins, as we can see in the names of one of the first three tribus, which was certainly also Etruscan (Luceres), as the name of Rome itself (from Ruma).

After Latin or Sabine Kings at the beginning (VIII-VII sec., and linked to the aristocracy), appeared Etruscan Kings (VI sec.), who introduced major reforms (public work, army, senate, ager publicus, trade, crafts and territorial expansion). Among them the dynasty of the Tarquins was certainly predominant.
Also thanks to this dynasty, the rex defined his power: he obtained a supreme military and civil authority, decision of life and death, and was preceded by axes, called lictors, in a special oriental ceremony. 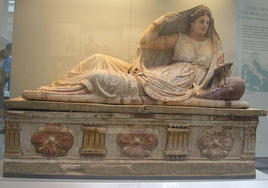 Sarcophagus of an Etruscan matron, British Museum, London. (Image supplied by the author)

The three ancient tribes increased to 21, and then to 35 (in the age of the Republic), 4 of which were urban and the others rural. These latter became very important especially under King Servius Tullius. Each tribe had the possibility to express one vote, without any distinction of caste, regarding capital punishment and other important trials. 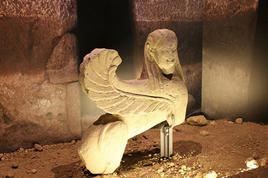 The Sphinx, National Archeological Museum of Vulci, Italy. (Image supplied by the author)

After Rome won its war against Sabines, Equi and Volsci, causing a great change in its social and economic conditions, it was necessary to reform the army. A new social class, the plebs, a multitude of people who did not belong to the aristocracy, grew in number and power. 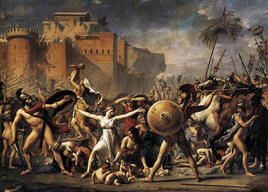 The Intervention of the Sabine Women, painted by Jacques-Louis David in 1799. (Image supplied by the author)

The military reform is usually attributed to King Servius Tullius. The Army now divided people into 5 classes, each subdivided into centuriae of younger and older (iuniores and seniores): the first class had 98 centuriae, of which 80 infantry and 18 of knights; the second, third and fourth of only 20 centuriae; the fifth of 30. At the lowest level there were 4 of musicians, artisans, etc.; and, with only 5 centuriae (the poorest), the so-called capite censi; for a total of 193 centuriae.
The political weight became commensurate to personal efforts in war, proportionally to the level of income. Centuria was a military and land-owning unit (200 acres minimum). The richest citizens were certainly in the first classes; the plebeians (according to their income) were proportioned in their power.
The popular assembly derived from the centuriatus exercitus, which consisted of all citizens who served the army and was divided in 193 centuriae. Their meetings were called comitia centuriata and it became the most important assembly of the whole city: they elected consuls and voted laws.

The Etruscan dynasties were forcibly deposed in 509 B.C., due to their opposing position to the Latin nobility: they gave more power to the mercantile and the non-privileged by birth castes. It was the first time we find a separation and distinction between religious functions and civil/military ones.The republic was born.

563 B.C.: the birth of Siddhartha Gotama 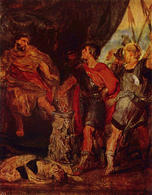 Muzio Scevola and Porsenna, Rubens. (Image supplied by the author)

Then began a period of obscurity and struggle (V-IV a.C.), which concluded with the consulship, through which probably the role of the praetor maximus, chief of the exercitus centuriatus, transformed himself into the principle power of the city.
The victorious aristocracy chose a couple of elected magistrates, praetors or consuls, each of whom held the supreme power for one year on civil and military affairs. In case of necessity a dictator could hold absolute supreme power, but for a period of no more than six months.
Following the last Etruscan King, the role of King remained as a mediator between the community and the Gods (interpreting their signs to people, auspicia), as the high priest.

The new asset made the historic nobility less powerful, and the plebeians more hungry for power. A long struggle between nobility and plebs began: the plebeian tribunes (the elected plebeian representatives) obtained the power of veto, which gave them the opportunity of defending plebeians against arbitrary proceedings (the provocatio ad populum) and their person was recognised as ‘untouchable’. But the main problem of the plebs were their debts. After the Gauls attacked, it had become clear that they were indispensable for Rome and its army.

Capitoline Brutus , believed to be the founder of the republic, IV sec B.C. (Capitolini Museum). (Image supplied by the author)

In V century there were two secessions of the plebs. Conflicts generated by economic issues (about land and debts, ager publicus and nexum) and social motives (the opportunity to marry, conubium). The plebs constituted their own council assembly, in order to vote their decisions and to elect their representatives, but only to a certain level of power. 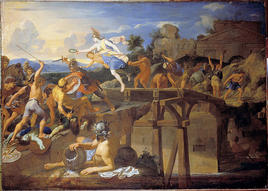 Thanks to a tribune’s request in 462 B.C., a special 10 member magistrature (the Decemviri) was created which published the XII tabulae (see lesson 9) in 450-449 B.C.
After the publication of the XII tab., the so-called Valeriae-Horatiae Laws recognised the new plebeian political positions, and it is believed to have matched the plebiscita to the leges (de plebiscitis); they also prohibited courts exempt from provocation, which had been suspended during the Decemvirate.
In 445 B.C. Lex Canuleia finally conceded the conubium between patricians and plebeians.

After the long period (448-368 B.C.) of the military institution with consular power (tribunatum consulari potestate) in 367 B.C. the tribuni plebis Gaius Licinius Stolo and Lucius Sextius Lateranus were promoters of the so-called Licinian-Sestian compromise: it was an institutional agreement with the patricians concerning debts (payment of the outstanding balance in three equal instalments in three years); ager publicus (no one could own more than 500 iugeri of land); possibility for plebeians to have their own Consules. Starting from 342 B.C. it is documented that one of the two Consules was always plebeian.

Cincinnatus. (Image supplied by the author)

V.1 – Other stages of the patrician/plebeian struggle

Other important moments of the plebeian struggle, which led to a significant constitutional change, were:
a) their possibility of candidating as dictator (351 B.C.);
b) the three leges Publiliae Philonis: (339 B.C):

c) plebiscitum Ovinium, the censors could choose senators also among plebeians) (318 B.C);
d) plebiscitum Ogulnium, the plebeians could be called to the college of the pontifices (increased from 4 to 8 members) and aruspices (from 4 to 9 members) (300 B.C);
e) lex Valeria de provocatione (the only certainly historical one) given by the consul Valerius Corvus set penalties for magistrates who deviated from provocatio (300 B.C);
f) lex Hortensia de plebiscitis definitely matched the plebiscites to laws (287 B.C).