I.1 – The jurists under the Severi

How did the role of jurists change with the rise of the Empire?

Augustus. (Image supplied by the author)

I.2 – The jurists under the Severi

The jurisprudential Roman model, generated for a town, which oriented the colonies, was now (starting from the Severi) inadequate to the new cosmo-political reality, in which Roman law could no longer be applied as the law of a city. It began to be contaminated while mixing with local provincial customs. Often in the provinces the authorities did not know nor understand Roman law. 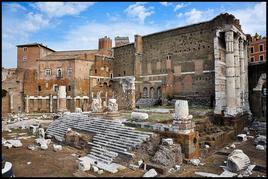 The Forum of Augustus. (Image supplied by the author)

I.3 – The jurists under the Severi

Jurists had less social importance than before, but they continued to interpret law in the new context and very often collaborated writing the texts of imperial laws. Already from II century A.D. we find jurists integrated in public administration, no longer an exclusive caste of the senatorial Italic aristocracy, but embraced also by provincial cavaliers, interested in an administrative career. 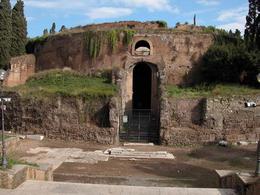 The Mausoleum of Augustus. (Image supplied by the author)

I.4 – The jurists under the Severi

Their principal activity was now to give responsa (more than to advise and to consult in everyday citiziens’ behaviour and to give assistance during civil trials) refining their methods of debate. They collected their responsa (libri responsorum) in literature, both in real and fictitious cases, paying attention to the Roman juridical reality (libri quaestionum); creating a filing system (libri digestorum). To this literature we must add the commentaries to the Edict or to other jurists’ publications; didactic works such as textbooks for students and legal technicians; monographics on topics e.g. criminal, financial, etc.

Vespasian. (Image supplied by the author)

I.5 – The jurists under the Severi

The most important jurists were: Papinian, praefectus praetorio under Septimius Severus in III century A.D., who is respected for his elegant style; Ulpian, native of Syria, imperial official too, who wrote the first monographies on imperial officials’ duties; Paulus, member of the staff of Septimius Severus, then praefectus praetorio. The last name on the list is that of Modestinus, a Greek, disciple of Ulpian. After his death, the jurists moved into the shadows: from the middle of the third century A.D., they continued their role in the administrative factory without names and without faces.

Domitian as Augustus. (Image supplied by the author)

From that moment with the anonymity of jurists together with the dormant state of assemblies and Senate, rose in importance the legislative activity of the Princeps, which was certain and clear. Beginning from Hadrian, the Princeps began to use the same method as a jurist: answering to his subjects’ inquiries on single cases at the bottom of the question itself (rescripta). Through the jurists’ interpretations these answers were extended to similar civil cases. 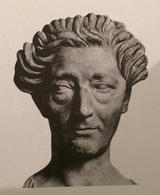 Woman of the Flavian age. (Image supplied by the author)

A Princeps’ Act can be classed in many categories: if it was of common interest of its subjects we find an Edict; if it was directed to a public official giving him administrative and financial instructions, it was a mandate; if it was a sentence in a trial, it was a decree. Whatever the case, the Princeps’ word was sovereign law.

Constantinople. (Image supplied by the author)

Another extraordinary role of the Princeps was as a high court judge in final appeal, directly or through his officials, in criminal and civil fields.

Constantine. (Image supplied by the author)

The Princeps influenced the Senate too. He would “ask” the opinion of the Senate on legal proposals (as did the Republican magistrates), which the Senate would then unconditionally approve (oratio in Senatu habita). This senatusconsultum was a source of law (as Ulpian says in D.1.3.9: the Senate can create ius): but in reality it was the Princeps who architected ius through the Senate.

Fayum, Portrait of a boy. (Image supplied by the author)