I.1 – Diocletian: the joint-leadership (tetrarchy)

The Distinction of the Empire periodisation in Principate and Dominate was by Theodor Mommsen and places Diocletian as a turning point. Many talk about the beginning of the fall of the Roman Empire. However today we prefer to speak of the late Empire, or late antiquity. Others put emphasis on the change brought about by Constantine, surpassing the more usual approach adopted by previous scholars. During the principate the existing Republican structures (Magistrature, Senate, Assemblies) continued. Regarding these structures the Princeps took a commanding role, thanks to a hierarchy of public officials. 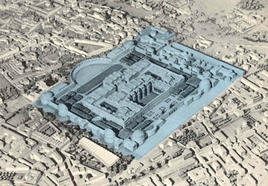 I.2 – Diocletian: the joint-leadership (tetrarchy)

In 284 A.D. succeeded to the throne Diocletian in Nicomedia. He understood that the centre of the Empire could be no longer Rome. He saw a clear division between the Orient and the West, the former too distant and culturally different from Rome; the latter oppressed on the borders by Barbarians. He created the tetrarchy, a system of co-ruling at the top of the Empire, whereby two Augusti govern the two separate parts of the Empire, and two Caesars (directly below them) ready to succeed them.
Diocletian considered his sovereign power equivalent to divine investiture; he reorganised public administration and the army; persecuted violently the Christians. It was necessary due to the immensity of the Empire to create a structure of capillaries and hierarchical administrative apparatus: therefore he divided the Empire in provinces each one subdivided into 12 administrative districts (called diocesis) and constituted 4 large praefecturae.
The two Augusti Diocletian and Maximian nominated their Caesars: Galerius and Constantius.

II.1 – Constantine: the re-establishment of the monarchic power

When Galerius and Constantius became Augusti, they nominated in turn their Caesars, one of which was Constantine, the son of Constantius, who on the death of his father, becoming Augustus, refused the co-ruling, wishing to have sovereign rule over the entire Empire. He defeated Maxentius at the battle of Milvian Bridge, Rome in 312 A.D., and after a civil war, also defeated Licinius, his Eastern co-emperor, in 324 A.D.

In 325 A.D. there was the ecumenical council in Nicaea, which established that the Holy Trinity had the same nature, ending all violent schismatic debates.

In 330 A.D. was founded Constantinople, the new Eastern capital of the Empire, opening towards the Orient. Begins a long period of peace.

In 337 A.D., whilst on his deathbed, he was baptised. However his relationship with Christianity is under discussion. 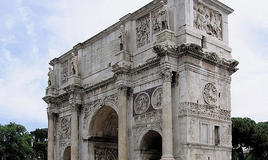 Arch of Constantine. (Image supplied by the author)

II.2 – Constantine: the re-establishment of the monarchic power

In 361 A.D. the Emperor Julian ‘the Apostate’ placed Christians once again in the background behind Pagans.
The Barbarians were increasingly pressing on the borders. In 378 A.D. the Emperor Valens is killed in battle in Adrianople by the Huns. 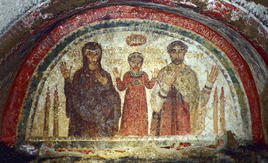 The Catacombs of St. Januarius in Naples, Italy. (Image supplied by the author)

III.1 – The House of Theodosius

In 379 A.D began the dynasty of the Spanish general Theodosius I, emperor of the Orient; in the West we find Gratian (the son of Valentinian) Emperor in 383 A.D. Theodosius allowed the Barbarians (especially the Visigoths) to become part of the Roman army and in particular conceded large settlements within the Empire to them.
In 380 A.D. through the Edict of Thessalonica Christianity became the official religion of the State. 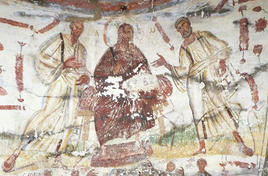 III.2 – The House of Theodosius

In 395 A.D. with the death of Theodosius I, the Empire was split in a definite way by his two sons: Arcadius in the Orient and Honorius in the West. The two parts of the Empire were now politically independent and even hostile towards each other.
Thanks to the long reign of Theodosius II (who succeeded Arcadius in 408 A.D.) the East overcame an economic crisis and discovered its identity as the Byzantine Empire. Theodosius II reinforced the borders; reorganised the administration; promoted economic/trade development; in 439 A.D. approved for the first time an important juridical code (the Theodosian Code). 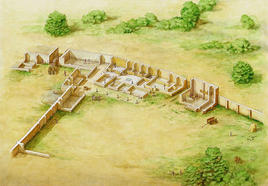 In 527 A.D. the Emperor’s nephew, Justinian, became Emperor of the Byzantine Empire: he managed to reconquer Italy, Spain, Northern Africa from the Barbarians. His aim was to restore the great Roman Empire, not only politically and militarily, but also juridically. He projected and realised the great Codification, which during the Middle Ages, was to be renamed Corpus iuris. 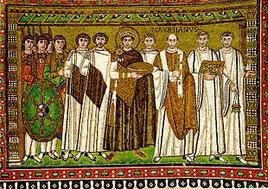 Justinian and his court. (Image supplied by the author)

On the contrary the West suffered a series of catastrophic events (as in 410 A.D. the Sack of Rome by Goths), which led to the fall of the Roman Western Empire in 476 A.D., when the Goth king Odoacer deposed the last Western Roman Emperor Romulus Augustulus.
In Italy, Theodoric, the Ostrogoth King, succeeded Odoacer and extends his reign including Sicily. In 497 A.D. he was recognised as king of Italy by the Byzantine Emperor Zeno. 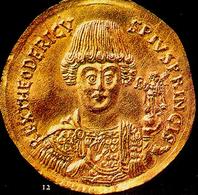 In Spain and Southern France in this period we can find the Visigoths under Euric II; in the rest of modern France the Franks of King Clodoveus, the Alamanni and Thuringii in central Europe. 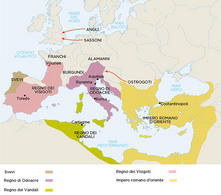 Italian map of Roman-Barbarian kingdoms. (Image supplied by the author)