I.1 – The Republic in crisis

186 B.C.: the Bacchanalia were prohibited

133 B.C. : The destruction of the Spanish city of Numantia

Ludovisi Gaul killing himself and his wife, Rome. (Image supplied by the author)

I.2 – The Republic in crisis

Major events that characterised the age of the late Republic and prepared the transition to the principate concerned the period between the Gracchi and the civil wars.
Tiberius and later his brother Caius Gracchus attempted an agricultural land reform by trying to limit (no more than 500 iugeri) the area of common land that one single land owner could possess, in order to favour the poor. There were violent political conflicts between ottimati and popolari: it was clear that a part of a single class could create a great social damage to another. Their attempt at a democratic reform was unsuccessful: they were both assassinated (133; 121 B.C.). 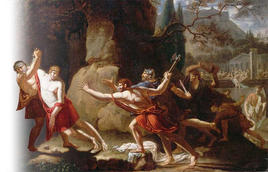 I.3 – The Republic in crisis

Romans began a great campaign of foreign wars to increase their territory in Gaul and Africa, in Macedonia and in Spain. Marius (consul in 106 B.C.), victor of Jugurtha, King of Numidia in Northern Africa, and after of Cimbri and Teutones, definitively reformed the army which became a professional army. He abolished the idea of an army consisting of landholders, summoning the proletariat with the promise of land allotments at the end of their service. The army became stable and was composed of long-term paid volunteers.
Opposing the democratic position of Marius was Sulla, victor over Mithridates of Pontus, consul then dictator, who violently suppressed civil war (86-82 B.C.) creating proscription lists against his enemies. He was willing to reinstate the power of the Senate and restore the oligarchic constitution. 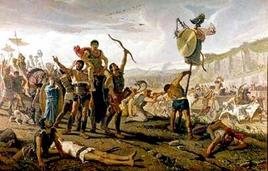 Gaius Marius defeats the Cimbri. (Image supplied by the author)

I.4 – The Republic in crisis

An analysis of the economic changes that occurred in those years reveals massive urbanisation, the crisis of the peasants’ property, the birth of new social figures (merchants, bankers, financiers, tax collectors, professional soldiers) with particular attention to the “Ordo equester”, a civil aristocracy, not identifiable with the ‘old’ knights, which still could not be considered a modern middle class. The ancient nobilitas were losing ground.
In a short space of time the Romans became a worldwide power, dominating Macedonia, Syria, Asia Minor, the Aegean, Africa and then Spain and Illyria: their excessive expansion revealed management problems and increased the spread of prophecies, new cults and myths arriving from the Orient. In Western Europe they dominated the Gauls thanks to Caesar and began the Roman campaigns in the Eastern Mediterranean thanks to Pompey’s victories in Syria, Palestine, and Bithynia.

I.5 – The Republic in crisis

In 60 B.C. there was the first privately agreed triumvirate, among Caesar (a young patrician), Pompey (a great military leader, victor over Mediterranean pirates and Mithridates) and the rich Crassus. The military power obtained by each one of them made it clear that it was impossible to reconcile back to the ordinary existing constitution. Following Crassus’s death, Caesar fought Pompey at Pharsalus. Caesar commanded Rome, having for the first time an exceptional monocratic power as dictator in 46 B.C. He died during a Senate’s assembly on the Ides (15th) of March at the hands of a band of conspirators.
Historians (Livy and Sallust) document the change and the decay of morals: regretting the past and the virtues of the ancients. 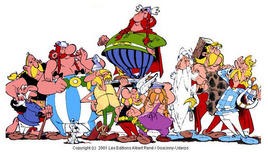 The Gauls of Asterix. (Image supplied by the author)

The transition from Republic to the Principate was slow: this new constitutional asset appeared gradually.

In 43 B.C. Octavian, the young boy who had inherited Caesar’s fortune and name, Mark Antony and Marcus Lepidus created the second triumvirate, a 5-year official magistrature, to renovate the Roman constitution, but it revealed itself a flop. In 31 B.C. Antony and Cleopatra were defeated at Actium. They committed suicide in Egypt, which then became a Roman province.

Augustus of Prima Porta. (Image supplied by the author)

In 29 B.C. the Senate nominated Octavian lifelong Imperator. Taking the name of Augustus he remains alone at the top: his silent revolution gave him exceptional powers (proconsulare imperium majus et infinitum on provinces and tribunicia potestas to oppose other magistrates), without ever being consul or tribunus. Notwithstanding his absolute power, (even pontifex maximus in 12 B.C.) he never declared himself dictator nor king. Defined as Pater patriae, he governed alone for 41 years.
He wrote the Res Gestae Divi Augusti: a reflection on the Principate offered by Augustus himself at the end of his life. 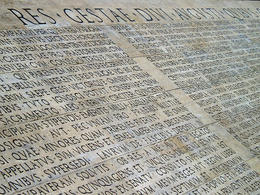 After a few years Tacitus commented that freedom was lost, and he stated that the Republican magistrature was now just mere vocabula (words). 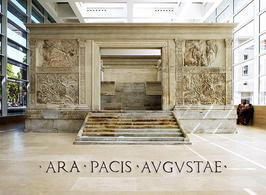 With the Julio-Claudian dynasty (Tiberius, Caligola, Claudius and Nero) appear the problematics in the order of imperial succession due to hereditary criterion: during 69 A.D. we can find three Emperors in the same year.

A.D.: Villa Adriana has been built

The Flavian dynasty – Vespasian, Titus, Domitian, Trajan (first non Italic Emperor), Hadrian (Spanish) – is characterised by the military successful power, which saw the importance of choosing the new Emperor through meritocracy. The future Emperor could be adopted by his predecessor. Among these Hadrian in particular gave much importance to provinces, and travelled often in the Oriental ones, he was a great admirer of Hellenism, created the first Roman cosmopolitan nucleus, proposed the idea of a sovereign Emperor of the entire Roman Empire. He was the first to have his own staff (consilium principis), where he placed some of his most trusted jurists.

Colosseum. (Image supplied by the author)

In 79 A.D. Pompeii, Herculaneum and Stabiae were destroyed by the volcanic eruptions of Mt. Vesuvius. Begins the persecution of Christians.

Pompei. (Image supplied by the author)

The Antonines’ epoch (Antoninus Pius, Marcus Aurelius, Commodus, Pertinax) can be considered a golden age for peace and prosperity: they centralised public power and united Italy with the provinces. The most important figure was Marcus Aurelius, philosopher, politician, intellect and exceptional soldier. 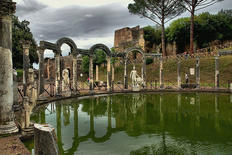 Antinoo. (Image supplied by the author)

During the Severi age (193-305 A.D.: (Septimius Severus, Antoninus Caracalla, Geta, Elagabalus, Alexander Severus) we can find a period of military, economic and cultural unrest. The government became more and more centralised, especially with Septimius Severus: there was a big financial crisis and violent border conflicts both in the East (Persians) and in the West (Gauls).
In 212 A.D. Antoninus Caracalla gave citizenship to all dwellers of the Empire with the constitutio Antoniniana, an edict by which the provinces were incorporated in the empire extending Roman law, civil and political rights, but also taxation to them.
After the death of Alexander Severus (in 235 A.D.),
began a long stretch of military anarchy: we conclude this period with economic and demographic decadence in Italy; the provincialisation of the army.
In that time Christianity seemed to weaken and split the Empire. 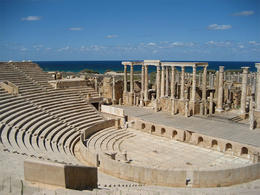