The orthogonal signals are reliable but not efficient, namely:

Is it possible to deliver information with PM → 0 but employing a constrained bandwidth W ?
Yes !!

By resorting, for example, to block coding.

A digital system utilizes an average power P to transmit information with a rate R (bit-rate).
The system resorts to a PPM scheme. 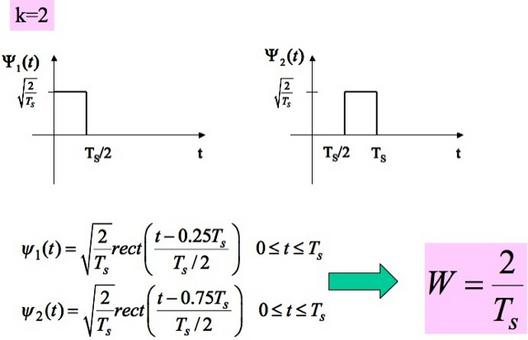 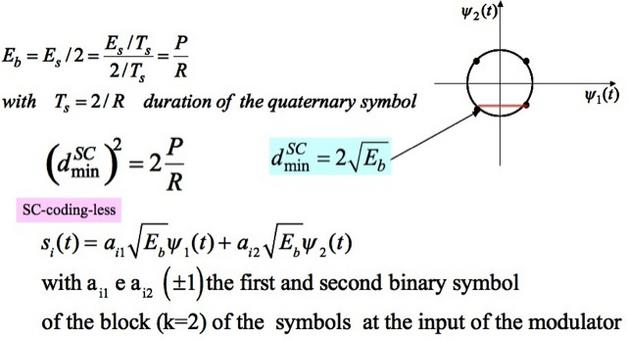 The closest codewords differ in one single component.

Rather than using a PPM with dimensionality two, let us use tree orthogonal signals to deliver the pair (k=2) of information symbols.

Any codeword differs from each other in two components.

Which is the advantage if the engaged bandwidth is increased?

The comparison between the two solutions is performed for a fixed energy used for delivering the two information bit:

The advantage related to the decreasing of the error probability is payed in terms of increased engaged bandwidth and by the complexity increase (presence of the coder and decoder).
The bandwidth increase is not exponential!!! 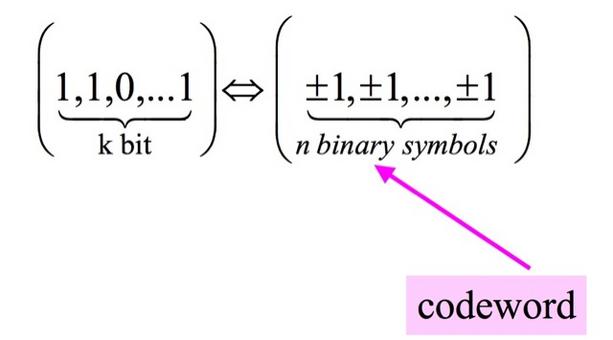 How many codewords we need?

A number equal to the number of the information blocks namely:

How many are the possible codewords?

As many as are the vertices of the hypercube whose dimensionality is n:

To choose a code means to select 2k from the 2n possible codewords.

How to perform such a choice?

In order to make the codewords as different from each other as possible, namely to have the distances between the signals si as large as possible.

Let us recall that the performances of an optimum receiver in AWGN can be evaluated approximatly by resorting to the minimum euclidean distance between the signals. 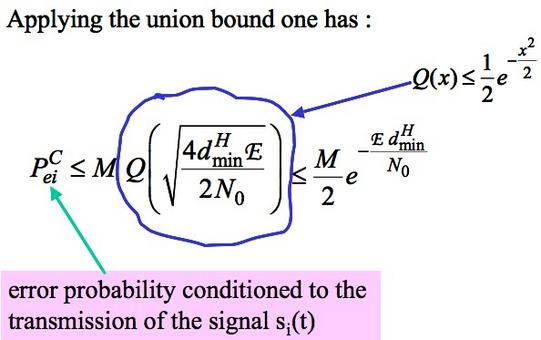 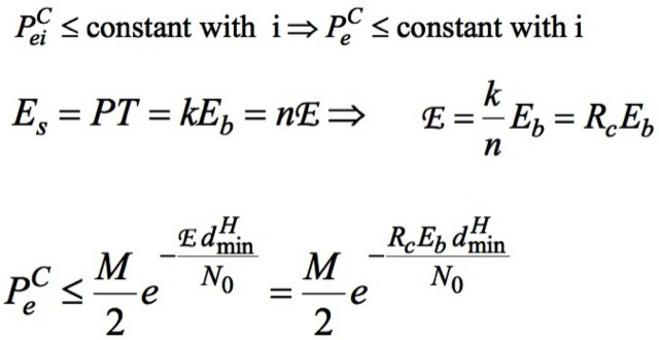 If no coding is performed, all the vertices of the hypercube of dimensionality k will be utilized →

By comparing the two bounds one has:

Since for binary codes Rc< 1 (k<n) for a fixed k and n the best code is the one which maximizes the minimum Hamming distance.

If the coding is adopted, the impulse duration to transmitt a single symbol of the codeword is:

It can be shown that in AWGN there existes a family of di block codes (ni, ki) with

such that if ni increases Rc is manteined constant and therefore, with the fixed banwidth expansion Pe → 0 provided that

Pe can approach zero without requiring a exponential bandwidth expansion such as happens for the orthogonal signals.

How do we pay for such an advantage?

In complexity since the block length n and therefore k must increase.

As k increases the number of the codewords M = 2k increases exponentially and, therefore also the complexity of both coder and decoder unless some convenient further property is imposed to the code such as for example linearity to lower significantly the complexity amount.