AWGN channel model and Bandlimited AWGN one are not appropriate for modelling wireless propagation mechanisms:

Loss due to slow fading effects (distance scale is in the order of 50-100 m – shadow fading).

Loss due to short range fading: distance scale is in the order of λ/2 (<10m).

Short range fading is due to two phenomenons:

Time dispersion due to multipath.

Frequency dispersion due to radial mobility between TX and RX and/or to variability of the propagation channel properties (time-variant) → linear time-variant model.

The received signal in the absence of noise can be expressed as:

ΦDn – phase shift due to doppler

the components i and j are distinguishable (wideband fading)

If the τi and τj of two components are similar →

If each term is due to a cluster of scatterers, αn(t) changes noticeably with the distance because of the phase changes of the single non-distinguishable contributions. 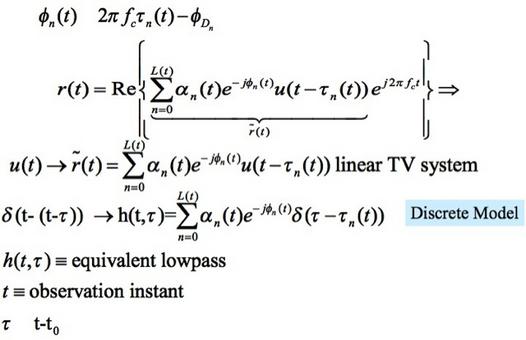 If the parameters are time-invariant:

The channel introduces only a time-dispersion and if L,τn are deterministic, the time-dispersion can be measured as the maximum delay with respect to the LOS contribution or to mean delay

rms of the kth path 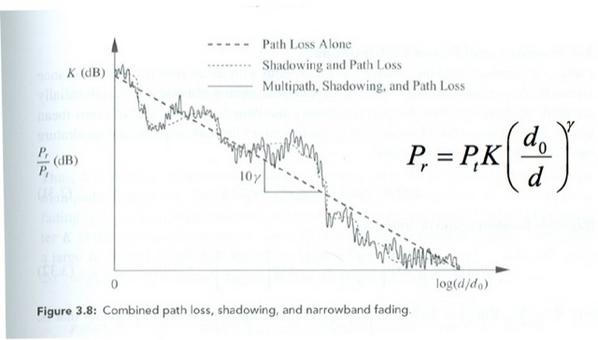 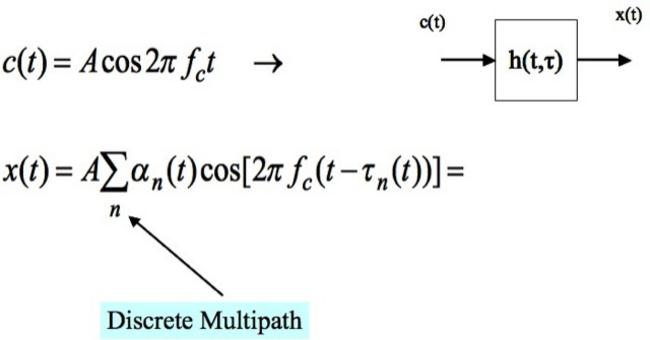 In general cn(t) is modeled as a complex gaussian process

where L is the numbers of paths,

is the time resolution i.e. the duration of transmitted signal. 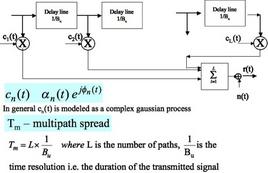 The phases Φn can give rise to constructive or destructive  contributions that weaken or strengthening the amplitude of the transmitted signal, namely the presence of fading effects.

|z(t)| models the variation law of the attenuation.

The variability measure of z(t) allows us to valuate the amount of spectral dispersion.

z(t) is a random signal, hence let us consider the mean square value of the bandwidth of z(t) namely,Bd

Let us denote with Bu the bandwidth of the transmitted signal:

If Bd <<Bu → the channel can be assumed to be  stationary since the spectral dispersion is  negligible with  respect to  the signal bandwidth Bu.

In the time domain:

The signal duration is much smaller than the temporal scale TC of the channel variation.