The range of αn(t) is generally large.

Since z(t) is a sum of independent contributions, with roughly the same strength, it can be modeled as a complex Gaussian process thanks to the Central Limit Theorem.

|z(t)| can be modeled (for any fixed instant t) as a Rayleigh RV if the components.

stationary and the scatterers τ1 and τ2 uncorrelated

mean power associated with the scatters which introduces the delay τ. 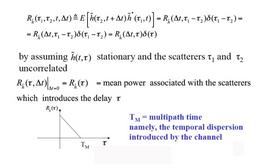 If Bu<<Bc the channel is frequency non – selective namely, flat in frequency.

if Ts<<Tc the channel is temporal non-selective namely, is flat in time.

If both conditions are verified, then there isn’t Doppler (temporal variability) as well as Multipath (temporal dispersion):

The scattering function describes the distribution of the spectral components associated with any path of delay Τ. 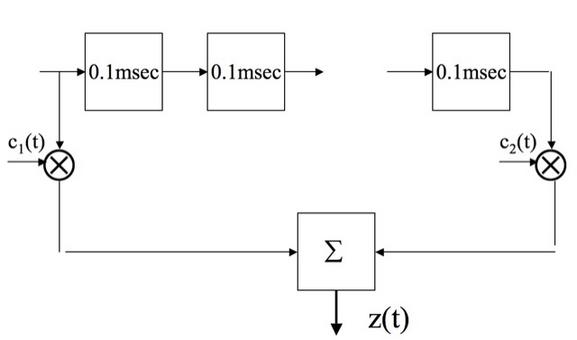 BDTM < 1 → overspread channel → TM>>Tc → the phase estimation of the carrier is very difficult.

Parameters of a fading channel

How to counteract the fading effects ?

Determine for a channel with doppler spread BD =80 Hz the minimum temporal separation toensure  that the samples of the received signalare  roughly independent.

If the received signal is Gaussian , the samples separated by at least 12,5 msec are roughly independent.

Assuming that TM = 5msec, select a modulation technique for both bit rates and moreover state if an equalizer is necessary to counteract ISI.

Let us exclude in the presence of fading PAM or QAM the signalling since they carry information also on the amplitude.

If we consider MPSK one has:

A transmission filter with spectral characteristics of the raised cosine can be utilized to obtain the desired shape.

If we want to use all the available bandwidth we can resort to a Spread Spectrum technique.

Determine the P(e) for a BPSK operating over a fading flat-flat channel Rayleigh distributed. We assume that the phase of the received signal is estimated and the optimum AWGN RX is utilized.

The output of the demodulator is:

For a fixed value of α: 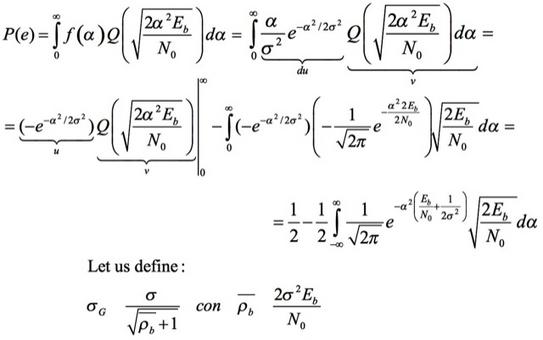 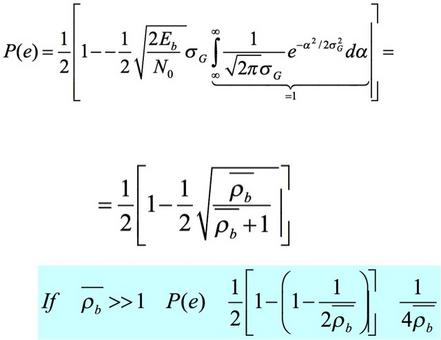 Determine the P(e) for the demodulator which utilizes the matched filter to s(t).
P(e) → ? When E/N0 →∞
Assume that the signal is transmitted over two channels statistically indipendent with

and noises are statistically independent.

The demodulator employ two matched filters and summ the two outputs to obtain the decision variable. Evaluate the P(e)

with n a Gaussian RV with variance N0E

A binary comunication system transmits the same information over two channels utilizing an antipodal signalling. The received signals are:

The detector performs the decision based on: r r1+kr2

Determine the value of k that minimizes the P(e)

r is Gaussian RV with

If it has been transmitted