Consider the reaction occurring in the gas phase:

We can express the reaction in mathematical terms in the following way:

where Bj represent the chemical species, i.e., in the case at hand:

while σj’s are stoichiometric coefficients, i.e., in the case at hand:

Independently of j, the reaction rate can be simply expressed as:

The set of stoichiometric coefficients of a reaction is subject to the restriction of the fundamental axiom of chemistry: the permanence of atoms. Let tjp be the subscript of the pth atom in the brute formula of the jth component (see the figure).

The axiom of permanence of atoms imposes that:

The initial condition for the reaction is:

We can then evaluate the extent of reaction at time t, by integrating eq. (1): 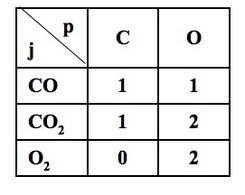 Given a system with N components participating in the reaction, the composition space has N-1 dimensions, since the total mass is fixed: the composition is identified by the N mol fractions, only N-1 of which are independent, since they must add up to 1.
In the case at hand:

But, in view of eq. (2) only 1 parameter, x, is needed to describe all compositions which can be reached from the initial one through the occurrence of the chemical reaction: the reaction subspace is 1-dimensional.

For a system where only 1 chemical reaction occurs, i.e. a system with 1-dimensional reaction subspace, the compositional space would also be equal to 1 only if the number of components was 2 (i.e. for isomerization) 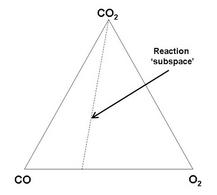 If more than 1 chemical reaction occurs:

If we indicate with M the rank of the σjk matrix (the rank of a matrix, by definition, is the order of the largest square sub-matrix having a non-zero determinant). If M’ > M, some reaction are linear combination of other reactions and can be deleted from the list. When this is done we have:

If all the reactions are isomerization or polymerization reactions we have that M = N-1.
In general we have M < N-1. Hence, in general, the reaction sub-space has a smaller number of dimensions as compared to the compositional sub-space.
Summarizing, in a system where M independent reactions occur we have that:

where xk represents the extent of the k-th reaction. xk are internal state variable and their ordered set is an M-dimensional vector, x. Correspondingly, it can be defined an M-dimensional affinity vector, θ , whose components are partial derivatives of

as a function of the homologous components of x:

If the state is defined as

and the rate of reaction is a k-dimensional vector which is a function of state, i.e.

, from the 2nd law it follows:

is invertible for volume, hence baric derivatives can be used:

At equilibrium the state is defined by

At any equilibrium state the scalar product

is zero and, at such equilibrium,

Moreover, if a smoothness hypothesis holds true and

, then we can derive that:

Note on smoothness hypothesis
If, as an example, we consider the case of two chemical reactions:

This system of equations has a trivial solution (

) only if it happens that in the figure.

This result follows from the assumed invertibility, hence it is a result which is derived from considerations on kinetics, albeit only in the neighbourhood of equilibrium.
We see now some examples where this smoothness hypothesis is legitimate and some counter examples where it does not hold.

For a single reaction, the assumption of invertibility implies that:

In other words, in the neighbourhood of an equilibrium point the rate of reaction can be expressed as a linear function of the displacement from equilibrium, i.e.:

Although it could seem at first sight a strong assumption, we readily realize it is actually always verified if we think that all real reactions are not irreversible. Now, if θ is well behaved (smooth), see figure A, or, equivalently, if

is invertible as a function of x around the equilibrium point (i.e.

But from this equation we cannot derive that

. However we also know that:

But, actually the assumption that the reaction is irreversible is an artefact. In fact:

When we are very close to equilibrium, i.e. when

which is actually linear in

There are, however, cases where, actually, the smoothness hypothesis does not hold true. In fact, consider the following case of two reactions for which the reaction rates in the neighbourhood of equilibrium are given by :

In such a case:

So, in this case, invertibility is violated in spite both rates being linear in the displacement from equilibrium! In fact

has a non trivial solution,

. The non trivial solution is:

As we have discussed in this section, we have found for the considered systems that, from the 2nd law, for assigned p and T,

, i.e. the equilibrium state is characterized by displaying the lowest value of G. From this, one concludes that cyclic reactions are impossible in the absence of simultaneous and independent sources of irreversibility.

The problem to be solved in thermostatics is the following.
Given an initial composition, the reaction subspace is identified by

. Given p and T, one wishes to find the point in this reaction subspace for which

is satisfied, i.e. the point of lowest free enthalpy (or Gibbs free energy). So, one needs the constitutive function which delivers

as a function of the state, i.e. the constitutive equation for mixtures. This will be topic of the following lecture.

The approach discussed so far is not restricted to the case of chemical reactions. It applies to any system for which internal state variables can be identified. For any such system, the 2nd law reduces to the requirement that the scalar product of the affinity vector with the rate of change of the internal state variables vector should be non-positive.
Moreover, an assumption of invertibility near the equilibrium point (i.e.

) will always produce the equilibrium condition that the affinity vector is zero.

Conversely, if the 2nd law for any system can be reduced to the requirement that the scalar product of two vectors (one of which is a vector of partial derivatives of the constitutive equation for free energy with respect to some variables while the other is the vector of the rate of change of those same variables) should be non –positive, the 1st vector is identified with the affinity and the 2nd with the rate of change of the internal state variables.

Considering specifically the perspective from the viewpoint of evolution of chemical reactions, we note that

are not required to be separately non-positive, but only their sum.