We need now to assign a better defined mathematical structure to the concept of STATE. In the following we will assume that the principle of local action holds true. As a consequence all the equations will be developed in local form. The variables or quantities which determine the local state of a body can be classified as follows:

Definition of SITE:
The site, α, is made of all those external variables that can be maintained at a desired fixed value, independently of each others, at all times ( and not only at any one time!). As a consequence, the SITE does not correspond to the set of external state variables but:

Definition of EQUILIBRIUM:
Equilibrium is that condition which is observed after that the site has been maintained at a constant value for an indefinitely long amount of time, with the condition that

and that all the velocities (global and relative) have a zero value.

As a matter of fact, at equilibrium, all the constitutive properties are only functions of the site. For the special case of so-called ELASTIC SYSTEMS we have that σ = α. As a consequence, for these systems there is no meaningful distinction between equilibrium and out of equilibrium states.

A transformation is defined as the mapping R (.) which maps time into site:

Processes and transformations coincide only in the case of elastic systems.

We will limit here our attention to systems in which the only relevant deformations are changes of density, i.e. the only non thermal state variable is V. Consequently, if the work is only that related to density changes, we have:

Where w has the usual meaning of net rate of work per unit mass. By combining eq. (1) with the 1st law, we obtain:

where ρ = f(σ). We make now the constitutive assumption that:

Let’s consider two transformations, R1 and R2 at constant T, as detailed in the figure at below

We ask now ourselves:

If the system is ELASTIC σ = α and hence the answer is YES. 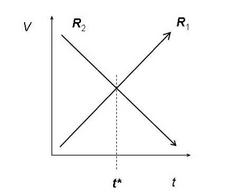 But, in general, σ ≠ α and, consequently, it could happen that:

In particular, on the basis of the 2nd law and of the concept of irreversibility, we will demonstrate for the case of VISCOUS systems, that:

the values of the pressure being approximately the same provided both the expansion and the compression take place slowly enough. Furthermore one would expect the pressure difference to increase with increasing viscosity of the material.
Hence, in order to have the capability of describing irreversible processes, one should take into account that the system considered be not elastic. In fact, elastic systems do not allow for any form of irreversibility and therefore the thermodynamic theory of elastic systems is essentially a reversible theory.

We can generalize what we have discussed above to the cases in which the mechanical work is not only a pressure work. In fact, consider an infinitesimal area vector

within a body, and let

be the contact force acting through the area. The stress tensor

is defined as the linear transformation of the area vector into the force vector:

The local form of the balance of linear momentum is:

here ρ is the mechanical pressure, ρ* is the thermodynamic pressure,

is the dynamical part of the stress tensor. Here and in the following we will always use the superscript ‘*’ to indicate a value at equilibrium, which is, consequently, only a function of the site.
Multiplying scalarly eq. (3) by the velocity vector we obtain:

Where K has the usual meaning of kinetic energy per unit mass. Moreover, the power P per unit mass of the forces acting on the system can be expressed as:

where V has the usual meaning of local specific volume, we easily obtain by combining eqs. (5) and (6) that the net rate of work per unit mass has the following form:

From eq. (7) we can readily obtain the expression for the net rate of mechanical work per unit mass in the cases in which the only mechanical work is the pressure work. In fact, in such cases:

We recall, now, that the local form of mass balance in terms of material derivative is:

And, by combining the last two expressions we have:

i.e. the divergence of the velocity vector represents the relative rate of change of specific volume of the system. By combining eqs. (8) and (9) we finally obtain the expression for the net rate of work per unit mass for the cases in which the only mechanical work is the pressure work:

The previous derivation shows, once again, that the body forces do not contribute nothing to the net rate of work.

The concept of an elastic system can be easily generalized to the case where there are more than one external state variable to consider in addition to T; for instance, in an elastic solid the strain at any given point is a three-dimensional tensor. Let the site be the pair

and T, where is

Correspondingly, there will be an n-dimensional vector

, called the generalized pressure, such that the net rate of work at a given point is given by:

We now go back to slide 6 where we wrote:

If we want to set up a theory able to predict that p at t* is different for the two transformations, we have to introduce new state variables, i.e.:

As a consequence σ ≠ α and the system is not an elastic system. Systems for which the state is determined also by the rate of change of some or all the external state variables are named VISCOUS. At equilibrium we have that:

As already mention before, the equilibrium value of a state function depends only on the site. We can then write:

If we consider the isothermal transformation reported in the following figure, before t0 and after t1 the system is at equilibrium, but it is not in the time interval from t0 to t1. The total net work, W , done in that time interval is: 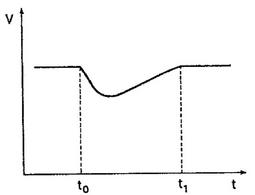 We discuss here briefly the differences between Viscous and Relaxational systems.

In fact there are materials (notably polymers) which have rather long relaxation times, so that also the values at instant of time significantly remote from the instant of observation affect the state. Such systems are called RELAXATIONAL. The thermodynamic theory for such systems is quite complex.

Viscous systems allow irreversible processes: for the transformation we have illustrated and discussed above, the total net work done is dissipated, since the system at the end of the transformation is in the same state as at the start. Also, viscous systems allow a meaningful distinction to be made between equilibrium and non equilibrium values of the quantities of interest.
However, the type of irreversibility and of equilibrium considered in this section are not the only possible ones and, in fact, the pragmatically more important ones are those arising in systems endowed with internal state variables.