If temperature is uniform we have:

We will consider now the case of different constitutive classes, by examining states defined only by external state variables.

For elastic systems p = p*. On the basis of the assumed state, we have:

At a certain time ‘t’ we can fix arbitrarily the values of T and V (see definition of external state variables). As a consequence, also A, p and S are fixed. Moreover, we can fix

too. So, the term

is also fixed. Now, since eq. (1b) must hold for any possible situation and, hence, for arbitrary values of

, no matter what their sign or magnitude, the only possibility is for the coefficient of

Which holds whatever is the value of

once we have fixed the value of the state. As a consequence:

On the basis of previous analysis, we conclude that for elastic systems the 2nd law degenerates into 0 = 0.

On the basis of the assumed state, we have:

If, as before, the only work possible is that of expansion/compression we have that

Note on A and a.
Since the mapping a(·) is uniquely identified by

, the partial derivatives appearing in (1c) are unequivocal: for instance

(1c) should hold for any conceivable process, i.e. for every set of values of

(that at any one instant of time, t, but not at all times, can be imposed at will).
It is important to note that the 2nd law imposes restrictions on the constitutive forms of mappings and not on ‘conceivable’ processes. As a consequence, mappings are not independent of each other.

Suppose we assign, at a certain instant of time, the values of

. This implies that in the (1c) all terms have an assigned value but

. Now, since (1c) should hold true whatever be the value of

, A does not depend on

, but depends only on the site

. In order (6) to be valid whatever be the value of

(in fact 2nd law should be valid at any time t for any process and, in particular, for any ’subclass’ of processes in which at time t the values of

have been chosen and assigned while

is let free to assume any possible value, in magnitude and sign) the coefficient of

has to be zero. As a consequence, we conclude that:

Moreover, since a does not depend on

, we have also that:

Equations (5) and (8) are restrictions on mappings. Instead, eq. (7) is a relationship between mappings. Once we have assigned the mapping a(·) the form of s(·) is assigned as well. This implies that the Helmoltz free energy is a potential for entropy.

Now, differently from the apparently similar case seen for the Elastic System, we cannot consider the subclass of processes in which at time t the term

assumes a certain assigned value while

is let to change arbitrarily: in fact if

is in this case a state variable. The only thing that we can say on the basis of (9) is that:

has no discontinuity around the equilibrium (i.e. around

) the curve represented in the figure above actually passes through the origin and one can conclude that: 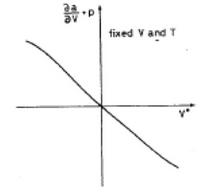 Equation (11) is a thermostatics result. From the previous discussion, we conclude that if

Moreover, if we assume that

In the case of elastic systems

always and not only at equilibrium.

If we had had also

among the state variables, we would have obtained:

Hence, A would have been, in such a case, a potential for S* and not for S.

Note on well behaved mapping
The results obtained above are based on some initial hypotheses of smoothness of constitutive mappings and, in particular, on the assumption of smoothness near equilibrium. No thermodynamic theory can be developed without such assumptions and that is what makes the thermodynamic theory for relaxational systems very complex. For such systems the state includes some functions, and hence the constitutive mappings are functionals for which the smoothness assumptions can be made only after an appropriate topology of the space of possible states has been chosen.

On the basis of the assumed state, we have:

It then follows that:

By reasoning as in the case of previous systems we obtain:

In this case V, T and are instantaneously independent of each other and can be assigned at will. In such a case, thermodynamics does not include any irreversibility. As soon as we introduce external variables which account for a time dependence, a form of irreversibility comes out.

EXERCISE - Part 1
Consider the case of a state associated with 3 external state variables which can be imposed arbitrarily and independently of each other for how long is desired: V, T, εx. A good example for such a case could be a rubber.

This is an elastic case in which:

We have two ‘mechanical’functions of state, i.e. p and f. Consequently:

We can now apply the 2nd law inequality, obtaining:

We then conclude that, for the case of systems associated with the assumed state variables:

Part 2
For such a system we should have that:

But, if we consider the case of IDEAL RUBBERS we have that:

We try to find, now an experimental way to verify if a rubber is behaving ideally or not. Assume we know CV (specific heat at constant volume) and, for the sake of simplicity, assume also that it is independent of T. If we perform an adiabatic elongation of the rubber (with ΔV = 0), since

(where w and q have here, respectively, the meaning of work and heat). Since w is measurable, it is actually experimentally feasible to verify if for a specific rubber we have or not that eq. (A) holds true. As a matter of fact, it is confirmed experimentally for rubbers that

. Let’s now see what are the consequences of this result. In fact, in such a case we have that:

The last expression guarantees that

is independent of T and, hence, from eq. (B), that

In fact the elastic modulus of rubbers is indeed proportional to absolute T.

We can specify the 2nd law inequality for this case:

Form which, with the usual procedure, we obtain:

From this we can conclude that, in the smoothness hypothesis (see figure in the next slide), that.

Illustration of smoothness hypothesis. The plot of the function is at fixed V, T, εx 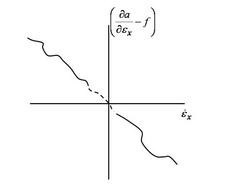