Still referring to systems for which

, we introduce other two state functions which are also additive functions of mass, i.e.:

Reminding that, for the state we are considering,

we obtain the following relationships between the different mappings introduced so far:

In many practical problems we know the value of pressure instead of that of volume. Hence, we would prefer to have p among the state variables in place of V. If we suppose that a function

Then, by substituting this function into the constitutive mappings, we can generate new mapping functions which map the triplet p, T and x into the value of the function of state.

We discuss here in some details the issue of invertibility. Consider, as an example, the p-V plot for the liquid-vapor equilibrium for a pure substance (see figure below). Here, the internal state variable, x, is the vapour phase fraction. With reference to the figure, we have that the equilibrium line where x = x*, is the line ‘0257′:

In the entire range of pressure p14- p36 the function is not invertible for the volume. In particular we have that:

is locally invertible quite everywhere. This implies that the inversion

can be done, but complying to the constraints imposed by local invertibility.
If we consider all the changes in the state of the system for which the system is located along that part of the p – V curve where there is invertibility at a certain pressure ( i.e. p = const.), we consequently have that for these changes df = 0, or, equivalently:

From which we can get dV only if

is finite.
If we then consider a generic change in state 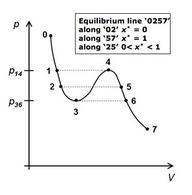 From the previous expression we can define the following baric derivatives (i.e. derivatives at constant ρ):

We need finally to define only

We still consider the case of systems for which the state is:

The state functions (constitutive functions) we consider are: p, S, H, U, G and A. We have that for a differential change in state, dσ:

dA is actually a differential since p, S and θ have finite values.
The invertibility assumption for the constitutive functions implies that, for the same differential change in state, the change of all the other functions of state are differential:

Equations (4) – (7) are called Maxwell relations. We underline here that we have used the following equalities:

In fact, as an example, from the definition of baric derivatives, we have:

While, from the definition of entropic derivatives, which will be illustrated later on, we have:

a) in a direct way we obtain:

b) putting equal to zero two differentials on the right hand side of eqs. (5) and (6):

c) by differentiation and substitution:

d) by commutation of second derivatives:

Other useful relationships are the following:

where CV and Cp are, respectively, the specific heat at constant volume and at constant pressure.

We pass from a description of the state of the type

, to a description of the same state of the type

Since, for a generic differential change in state we have:

For a differential change in state complying to the constraint that dS = 0, we obtain:

From this expression we easily derive the expression for entropic derivatives we were seeking for:

We can use these expressions, to demonstrate that (see note 5 at the end of chapter 2 of the notes):

and that, more in general:

We have already seen in lecture 7 that, under proper smoothness hypothesis, if

, with x internal state variable, the equilibrium condition is:

We demonstrate now that, if we express the state as

, the equilibrium condition is:

In fact, from the 2nd law inequality:

Now, since we have demonstrated that from the 2nd law inequality that:

And we can write