Geometric representation of signals and constellations

The physical layer deals with “physical” aspects of data transmission (e.g., voltages, waveforms, noise, etc.).
Due to the hostile radio channel, the task of the physical channel in wireless communications is more challenging than in wired ones:

The modulator adapts the signal emitted by the source to the characteristics of the physical channel.

Example: it performs frequency upconversion of the source signal when the channel operates at radio frequencies.

The demodulator reverses the operations made by the modulator in order to deliver at the destination a close copy of the source signal.

Classical scheme thanks to Claude Shannon, the “inventor” of information theory. 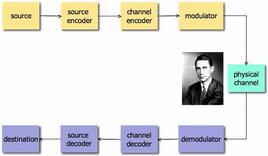 Analog sources can be converted in digital form (a stream of 0/1) by means of A/D conversion (sampling + quantizing + coding).

The reverse operation (D/A conversion) is performed at the destination. 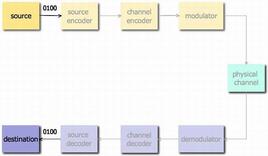 The goal of source encoding is to eliminate/reduce the data redundancy of the source.

Lossy encoding: not perfectly reversed by the decoder, some information is “lost” in the process (e.g., MP3, JPG, MPEG2). 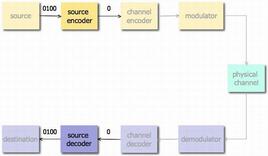 The goal of channel encoding is to introduce a controlled amount of redundancy to achieve reliable transmission over the channel (e.g., parity bits). 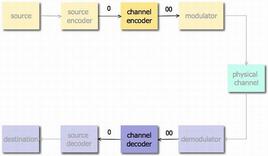 The modulator converts the input bits into an electrical/optical waveform suitable for transmission over the channel.

The demodulator performs the reverse operation at the receiver.

In digital modulation schemes the waveforms transmitted over the channel belong to a finite set. 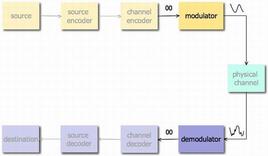 It provides the electrical/optical/radio connection between the source and the destination.

It introduces several degradations in the transmitted signal: 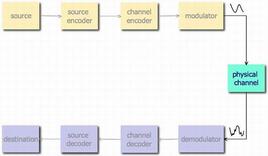 Every symbol mi is mapped into a waveform si(t)

The bit-rate Rb=1/Tb (bit/s) is the rate with which bits are presented at the modulator input.

Rs represents also the rate with which the waveforms si(t) are generated and sent over the physical channel (signaling rate). 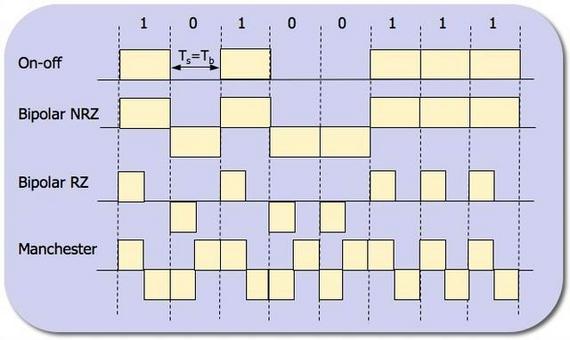 Strings of K=2 bits are mapped to M=4 delayed versions of the same pulse. 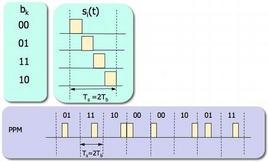 The average energy of the transmitted waveforms is Es

Since a waveform is transmitted every Ts seconds, the average transmitted power is Pt = Es /Ts=Eb/Tb.

Due to channel and noise effects, the RX waveform is different from the TX one:

The performance of the demodulator is measured by its bit/symbol error rate (expressed as a probability).

The most common performance measure is the bit error rate (BER):

Simpler to evaluate is the symbol error rate (SER):

It represents the probability that the demodulator decides on a different waveform than the one actually transmitted.
When M=2 → BER = SER.
When M>2 with Gray mapping → BER ≈ SER/log2M.

The signal to noise-ratio at the RX is defined as

Pt and Pr are related through path loss: Pr = Pt/Pl.
In the following we assume for simplicity that Pl = 1 (0 dB) so that Pr = Pt:

Instead of SNR/SINR, the energy contrast is often utilized:

Modulation with memory: the waveform emitted in the k-th signaling interval depends also on symbols emitted in previous intervals.

Linear modulation: the waveform si(t) is a linear function of the symbol mi.

Nonlinear modulation: the waveform si(t) is a nonlinear function of the symbol mi.

The waveforms si(t) have a significant spectral content around f = 0:

The waveforms si(t) have a significant spectral content around f = ± fc ≠ 0:

A sinusoidal carrier can be modulated by changing its three basic features: see figure on the top.

Modulation schemes can be conveniently analyzed by resorting to geometrical interpretation.

Every set of M signals s1(t), …sM(t) can be represented as the linear combination of N ≤ M orthonormal functions:

N = dimensionality of the signal set.
N ≈ 2BTs for signals of duration Ts and bandwidth B (dimensionality theorem).
φ1(t), …φN(t) can be found with the Gram-Schmidt procedure.

Many bandpass modulations schemes can be described using only N=2 orthonormal functions:

Linear algebra concepts can be utilized: