Bandpass (BP) signals are common in electrical and optical communications:

Representations of a bandpass signal

A bandpass signal can be represented in three equivalent forms.

The signal u(t) is the complex envelope of s(t):

Ps=Pu/2 (the powers of the BP and LP signals differ by a factor of two).

Let h(t) be the impulse response of a BP LTI system.
Since h(t) is BP, it can be represented as a BP signal:

where hl(t) is the complex envelope of h(t).
Note the extra factor 2, which allows one to simplify the input-output relationships (details on the following slide).

useful also in simulations → reduction of the sampling frequency

Main features of the wireless channel 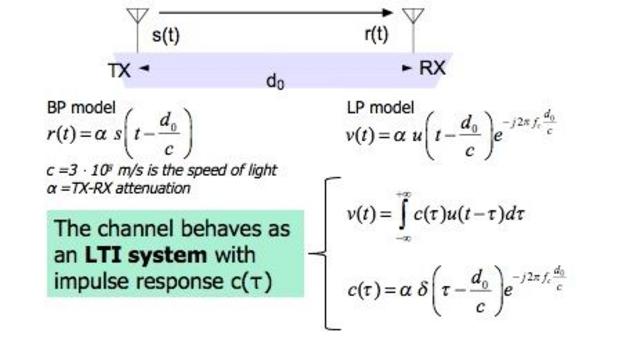 Example: transmission of a sinusoid

Assume that a simple sinusoid is transmitted:

The received signal is a delayed sinusoid with the same frequency:

This simple channel introduce only a time shift of the TX signal. 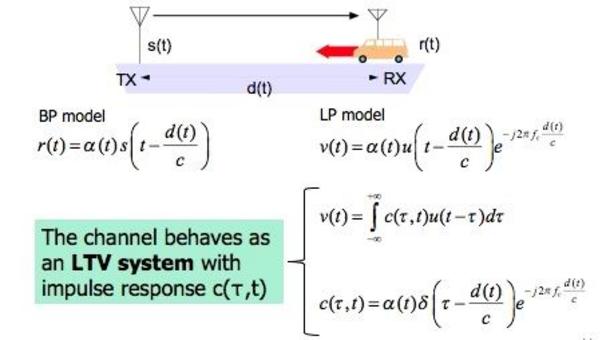 The received signal is not a simple delayed sinusoid, two new effects associated to channel variability:

Effect of angle on Doppler shift

Assume that θ is the arrival angle of the received signal relative to the direction of motion.

The Doppler shift is: 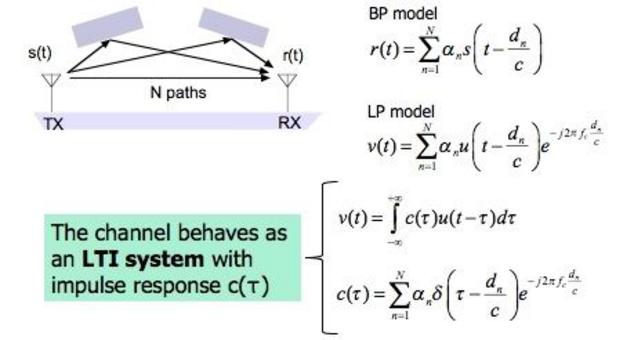 Example: transmission of a pulse

Assume that an ideal pulse is transmitted:

The received signal is the superposition of N pulses, with different delays, amplitudes and phases.
A measure of the amount of time dispersion is the multipath delay spread Tm. 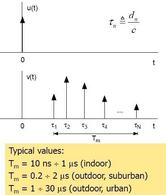 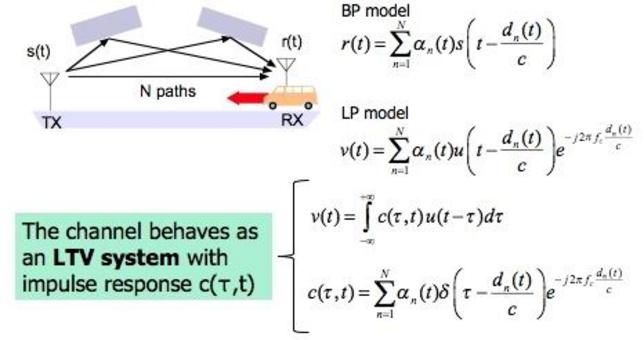 Response of the channel at time t to an impulse applied at time t-τ:

Deterministic channel description requires exact knowledge of the time-varying coefficients αn(t), phases φn(t), and delays τn(t).
Difficult to obtain in practice, it is common to model c(τ,t) as a random process → statistical channel description.
Each macroscopic path is generally a large sum of microscopic contributions → c(τ,t) can be modeled as a Gaussian random process due to the CLT.

The RX signal is the sum of many multipath components.
Amplitudes αn(t) change slowly.
Phases φn(t) change rapidly, since:

Different models for the two situations: 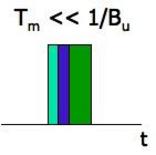 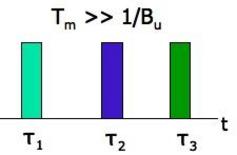 The received signal exhibits amplitude fluctuations due to constructive/destructive interference between the paths.
Two different fading models (narrowband/wideband) depending on relation between delay spread Tm and inverse signal bandwidth 1/Bu.