Typically follows a log-normal distribution.
The shadowing decorrelates over distances of the order of the dimensions of the blocking objects (decorrelation distance Xc).

Due to shadowing, the path loss in dB is modeled as a normal (Gaussian) distribution:

Models the spatial correlation of shadowing

Setting ρD=1/e and D=Xc the following simplified model is obtained: (see the figure on the right).
Xcis the decorrelation distance: 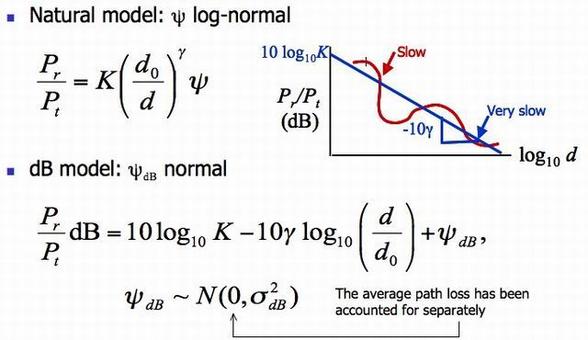 Consider the set of empirical measurements of Pr/Pt given in the Table for an indoor system at 900 MHz.

Find the path loss exponent δ that minimizes the MSE between the simplified model and the empirical dB power measurements, assuming that d0 = 1m and K is determined from the free-space path-gain formula at this d0.

Find the variance of log-normal shadowing about the mean path loss based on these empirical measurements. 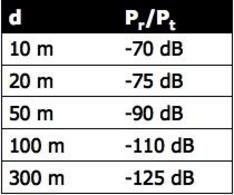 Probability that the received power Pr(d) is below the minimum acceptable value:

Assume that Pr,min is the minimum received power (RX sensitivity), and let Pt,minbe the corresponding minimum TX power (neglecting shadowing) with symmetrical shadowing, there is 50% probability that the effective Pr is below Pr, min (50% outage probability).

The fading margin FdB is the excess Pt needed to reduce the outage probability below a given value (typically 10%).
With the lognormal model it can be shown that:

Find the outage probability at 150 m for a channel based on the combined path loss + shadowing model of the previous examples, assuming: 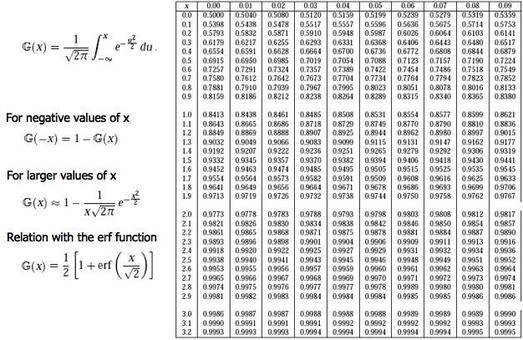 Amoeba cell with holes in coverage 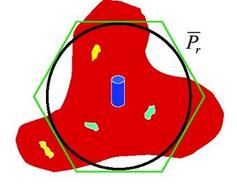 Expected percentage of locations within a cell where the received power is above a given minimum.
Increases as shadowing variance decreseas.
Large percentage is an indication of interference to other cells.
Can be evaluated analytically assuming the lognormal shadowing model.
In practice it is evaluated by using sophisticated software tools.

Random attenuation due to shadowing modeled as log-normal (attenuation in dB is Gaussian).
Shadowing spatially decorrelates over decorrelation distance Xc (Gudmunson model).
Path loss and shadowing parameters can be obtained from empirical measurements.
Combined path loss and shadowing leads to outage, amoeba-like cells, and holes in coverage.
Cell coverage area dictates the percentage of locations within a cell that are not in outage.
Shadowing can be counteracted by increasing transmitted power, macroscopic diversity, and power control.