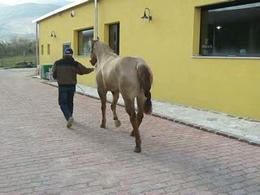 Affected horses seem to have more rapid glucose absorption from blood compared to control sample but the exact mechanism is not yet known.  Histologically there is an abnormal accumulation of glycogen in the cytoplasm (PAS positive and amylase sensitive) within the type II fibres.  In some cases the glycogen aggregates are ubiquitinated, and resistant to amylase in inclusions, composed of glycogen and filamentous protein. 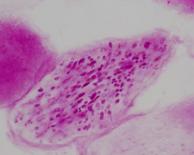 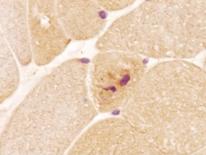 Clinical signs are variable, but it is thought that all of them are the result of insufficient energy production on the part of affected muscle fibres.   It is possible that the abnormal myofibre function is due to changes in the architecture as a result of deposits of complex polysaccharides. However, the excellent response to treatment, even in horses with myofibre inclusions, suggests that abnormal myofibre function depends more on changes to energy metabolism than to deposits of complex polysaccharides. 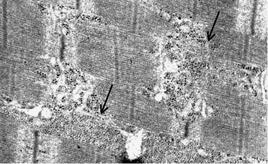 Clinic signs include recurrent rhabdomyolysis after exertion but more often the animal presents with an unexplained lameness in pelvic limbs. Affected horses may also have rigid gait, symmetrical muscle atrophy, backpain, muscle cramps which lead to flexion anomalies in the rear limbs with characteristic fasciculation and/or tremor, and bilateral weakness in the pelvic limbs or generalized weakness.

In draft horses, as the illness progresses, the animal may suddenly be unable to remain standing, or may be unable to return to a standing position after anaesthesia. CK and AST levels are noticeably higher after episodes of exertional rhabdomyolysis, but they can be slightly or moderately raised in affected horses even after exercise or after lying down. Normal CK and AST levels in these animals points to a kind of muscle dysfunction which is not associated with necrosis. 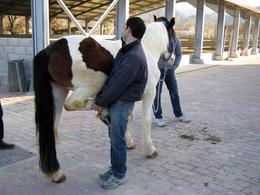 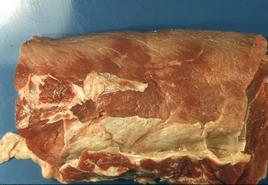 The kidneys in horses that have died of serious rhabdomyolysis are swollen and dark (pigmentary nephrosis) because of myoglobinuria.  Myofibral necrosis can vary and be more or less visible depending on its extent. Massive necrosis or regeneration can be seen after a serious episode of rhabdomyolysis whereas in horses in decubitus there are numerous, small foci of necrosis. 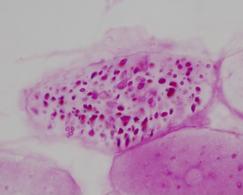 Positive intracytoplasmic material with PAS reaction because of the glycogen

So far, a diagnosis of polysaccharide storage myopathy is based on finding histopathologic lesions on muscle biopsy of horses showing clinical signs of the disease. Preferred sites for the biopsy are glutei, semimembranosus or semitendinosus although lesions have also been noted in longissimus, especially in horses with a tendency to back pain.

Treatment involves changing the animal’s diet to minimise consumption of starch and sugars (less than 15% of total daily calorie intake) and increase that of fats (at least 20% – 25% of the daily total of calories should come from fats). Cereals are replaced with feeds containing more fibre and less starch and less sugar, and fats are added in the form of vegetable oil, powdered fats and supplements containing large amounts of fats or rice bran.   Animals must be allowed periods of grazing or in a paddock and regular exercise should be guaranteed where possible.  This treatment is effective in the majority of cases.

A congenital, autosomal recessive disease, due to the loss of a glycogenic enzyme, the glycogen branching enzyme (GBE). It is a new disease which affects quarter horses and American paint horses.
The disease can cause miscarriage or still births, or the foals are born weak or with contractures, rhabdomyolysis or cardiac defects in the early stages of development.

The GBE deficiency leads to the formation of long unbranched glucose chains inside the cells which causes abnormal aggregates of glycogen to form.
These molecules need to be normally converted to glycogen in the presence of GBE. This is the final step of glycogen formation. There are no specific macroscopic lesions. Foals that die as a result of cardiac insufficiency may present with pulmonary edema.

Typical histological lesions are characterised by rounded hyaline inclusions similar to amylopectin (polyglucosan bodies) within skeletal and cardiac myocytes, especially in the Purkinje fibres, and to a lesser extent in the hepatocytes.
There are also inclusions in the brain and spinal cord and, unlike glycogen, these are PAS positive but resistant to amylase digestion. As with other carbohydrate metabolic disorders, it is believed that failure to produce energy, or the loss of architecture because of the amylopectin deposits, leads to cell dysfunction. 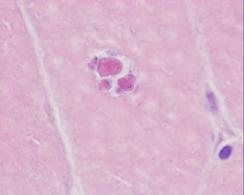 Polyglucosan bodies in a muscle fibre

Analysis of peripheral blood and skeletal muscle for GBE activity will identify affected animals, as levels of GBE activity will be seriously reduced in those already sick and moderately reduced in female carriers.
A DNA test is now available using hair from a horse’s mane or tail to identify carriers of the disease. There is, however, no treatment for this disease.