The basics of spoken English

Unlike Italian, English sounds very different from the way it is written: the gap between the written and the oral code represents one of the main difficulties for Italian learners.

Phonetic symbols provide a useful tool for recognising and reproducing sounds; if we know the value of these symbols, we can work out the correct pronunciation of a word. If you look a word up in the dictionary, you find the phonetic transcription between slashes, and after it, the explanation:

Because of the gap between the written and the oral code, and of the number of possible pronunciations associated with the same letter, it is essential to have a good grasp of the International Phonetic Alphabet (IPA), and to check the pronunciation of words either using the phonetic transcription or the audio facility of a CD-ROM dictionary.

ACTIVITY 1
Go to Esl-lounge.com
Try to make out and memorise the sounds of English – that is, in linguistic jargon, the phonemes – and their phonemic transcription.

ACTIVITY 2
Now practise the sounds and say them aloud. A very useful tool is the British Council’s interactive chart, which allows you to hear the sound by clicking on the corresponding symbol. It is free and downloadable at: Teachingenglish.org.uk

Try to make out the text corresponding to the phonetic transcription in the image.

A little help: Even if you find it difficult, give it a try. Then, listen to the recording and check the items you may have left out.

KEY TO THE ACTIVITY
This is a comment on the English Language by George Mikes, a Hungarian journalist and writer who moved to England during the 2nd World War:

When I arrived in England I thought I knew English.
After I’d been here an hour I realized that I did not understand one word.
In the first week I picked up a tolerable working knowledge of the language and the next seven years convinced me gradually but thoroughly that I would never know it really well, let alone perfectly. This is sad. My only consolation being that nobody speaks English perfectly.

The situation depicted in this text seems very much like the typical first-time impression of an Italian in an English-speaking country: no easy understanding! However, the sense of frustration one may experience when using English as a foreign language is normal, being a part of the natural process of language learning.
It is the increasing familiarity with the language that enables users to overcome difficulties and tune in to the rhythm and properties of spoken English.

In linguistic jargon a letter with more than one phonetic realization is called a multivalued grapheme.

Another characteristic of English is the relative variability of the way some words are pronounced, depending on the context and the emphasis. Some key function words with a very high frequency such as pronouns and auxiliaries have either a weak or a strong pronunciation.

A strong pronunciation is when a word is stressed and there is a distinct or strong vowel sound.

A weak pronunciation is when there is no stress on the word and the vowel sound is weakened.

In spoken language weak forms are much more common, while strong forms are used for emphasis.
Compare these two realisations for the same phrase you and me: 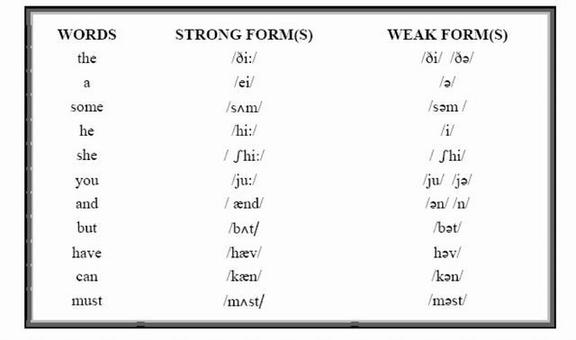 As in any language, besides the standard, there are many other varieties, which either have a geographical or social connotation. In particular, given the international or indeed global nature of the English language, we usually identify three main national varieties (British, North-American, and Australian) plus all the Commonwealth varieties of English as a Second Language (Indian, Kenian, etc.).

However, even within a national variety, there are some regional or local differences with regard to pronunciation of single items and rhythm and intonation.

Listening to songs or news broadcasts, watching films, dowloading podcasts in English will expose you to a greater variety of accents and help you become a little more confident when speaking English.

ACTIVITY
Listen to a short excerpt read by various native English speakers and try to identify their distinctive features.

Pronunciation in the language classroom

Check the pronunciation of any new word using your dictionary or the free online Dictionary of English Pronunciation at Howjsay.com
Pay attention to word stress and sentence stress in both listening and speaking.
As a rule, listen to a short recording in English at least once or twice a week and take notes on rhythm and pronunciation. Then read that extract aloud and possibly record your own voice for listening.
Practise the sounds you find most difficult.
Aim for clarity in your speech, which means don’t speak too fast, and pronounce sounds correctly.