In the early Universe, the three flavour active left-handed neutrinos να  and their CP conjugated states were kept in thermodynamical equilibrium with e.m. plasma by CC and NC weak interactions with charged leptons and quarks. In this regime the neutrino distributions are just fixed by thermodynamics to the Fermi-Dirac type

By using such distributions we get at the equilibrium

As the temperature decreases, CC and NC weak interactions rate drop down faster than H(T) and hence become not efficient enough in mantaining neutrinos at equilibrium. At this point one says that neutrinos decouple from the e.m. plasma (baryons, leptons, photon). To describe neutrino decoupling in details, one should use the set of Boltzmann equations governing the evolution of  their distribution function. Nevertheless in the following we will assume a simplified approach that provides quite precise results.

In order to simplify the Boltzmann equations ruling neutrino distribution functions one can consider the leading processes contributing to the collisional term, namely the scattering over electrons/positrons and pair conversions,

When the temperature is at most few MeV, we can consider the weak reaction rates as due to a 4-fermions interaction term (W and Z not propagating). In this case the corresponding cross section times velocity for charged and neutral current interactions is of the order of

ne denotes the electron/positron density, which is ≈ T3 as long as electrons are still relativistic. In that epoch the Universe was RD, hence the Hubble parameter was given by

The temperature for which the weak interaction rate, dropping down because of the expansion, reaches the value of H is called the Decoupling Temperature, hereafter denoted by TνD.

From the above definition the decoupling temperature reads

The decoupling temperature is weakly dependent on g* . For temperature of few MeV the relativistic d.o.f. give

One can get a better prediction for the decoupling temperature via the kinetic equation. The Boltzmann equations written in terms of the variables x=m a and y=p a, with m an arbitrary mass scale (usually taken ≈ me) read

With instantaneous decoupling limit we denote the simplifying assumption of a neutrinos decoupling occurring instantaneously  at TνD. In reality the decoupling takes place over an extended range of time. In particular more energetic neutrinos will be kept in equilibrium with e.m. plasma longer than low energy neutrinos. This means that even neutrinos to some extent get profit of the entropy release due to e± annihilations, and hence some thermal distortions will be imprinted in the neutrino distribution with respect to a standard Fermi-Dirac function. However these effects change the neutrino energy density at the percent level only, and thus will be neglected in the following.

After decoupling, neutrinos propagate freely, and their distribution only feels the effect of redshift of physical momentum. In the instantaneous decoupling approximation, we can assume the distribution at TνD to be exactly a Fermi-Dirac one

with aD the scale factor at TνD. From that moment on the distribution function satisfying the Liouville equation for ultrarelativistic particles is

which is the initial distribution with a temperature  redshifted T = TνD aD/a . Note that this temperature scaling is equivalent to the conservation of the neutrino entropy per comoving volume, namely

Entropy density of the e.m. plasma

The neutrino to photon temperature ratio after neutrino decoupling can be easily obtained by using the conservation of entropy for the e.m. plasma. As long as electron/positron pairs are relativistic, the photon temperature simply scales as a-1 since the number of degrees of freedom gs is constant. When the temperature drops below a value ≈ me, e.m. , the process

cannot be efficiently compensated by the inverse pair production. This implies that electron/positron distributions start to be suppressed by the  term e-me/T, and practically e± disappear, apart from a tiny relic electron density related by electric neutrality to the baryon number parameter ηB. In practice, the entropy release due to e± annihilations reheat photons, whose temperature is then not decreasing as    a-1 for a while. Due to the smallness of weak reactions at this temperature, neutrinos practically get no profit of such reheating, nevertheless even though to a very small extent, such phenomenon leaves a footprint on neutrino distribution functions.

Ratio between neutrino and photon temperatures

The previous expression strongly simplifies for a temperature much larger than me, in fact we get

whereas for T << me  we simply have gs = 2. Since the entropy for the e.m. plasma is conserved inside a coomoving volume, namely

with gν = 6. By using the ratio T/Tν determined in the framework of instantaneous neutrino decoupling, we get nν = 9/11 nγ. This ratio allows to evaluate for the present value of photon number density, namely nγ0 = 410 cm-3, the corresponding neutrino number density, nν0 = 336 cm-3. Absolutely larger than the present aboundance of baryons, namely nBo ≈ 10-7 cm-3. Hence photons and neutrinos are the most abundant species in the present Universe. In particular since neutrinos at the present are non relativistic (their energy is ≈ 10-4 eV << mνi) we can write

If we consider negligible the neutrino chemical potentials, the number density of cosmic neutrinos for each flavour is given by

which leads to an extremely large flux with respect to other astrophysical neutrino sources, including solar neutrinos. By using the ratio between neutrino and photon temperatures, previously obtained, we can compute the total amount of radiation after  e± annihilations which results

Such result holds if:

can be casted in the following form

Reactions contributing to the collisional term 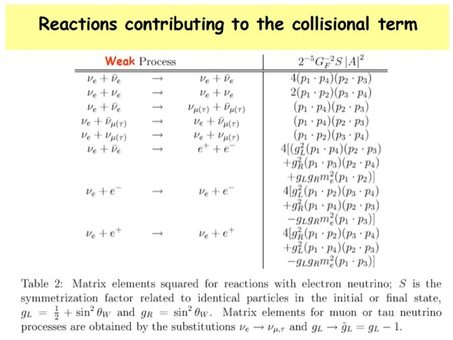 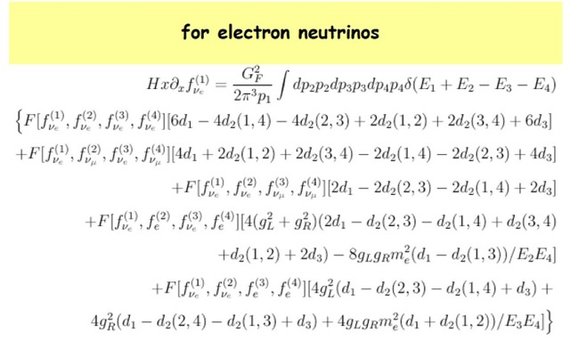 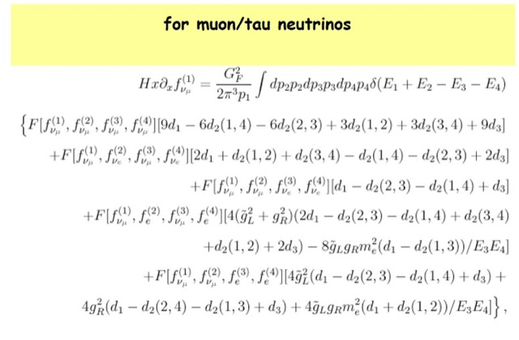 In addition one must satisfies the covariant energy conservation

where the total energy density reads

whereas the total pressure reads

Mass renormalization effects due to e.m. interactions in the hot plasma

The change in the electromagnetic plasma equation of state can be evaluated by first considering the corrections induced on the e± and photon masses. They can be obtained perturbatively by computing the loop corrections to the self-energy of these particles.  For the electron/positron mass, up to order α ≡ e2/4 π we find the additional finite temperature contribution

The renormalized photon mass in the electromagnetic plasma is instead given, up to order α, by

The previous corrections modify the corresponding dispersion relations as

Expanding P with respect to δme2 and δmγ2, one obtains the first order correction

and from the previous relation one gets ρint as well.

The presence of the additional contributions Pint and ρint modify the evolution equation for z≡ T a(t), which now reads

The functions K’(ω) and J’(ω) stand for the first derivativeof K(ω) and J(ω) with respect to their argument. Note that neutrinos affect the final value of z through the terms

,which are not vanishing only if neutrinos have a non thermal behaviour.

In case one neglects the finite temperature QED corrections, the functions G1(x/z) and G2(x/z) vanish, and one recovers a very well known expression reported in literature. Notice that the presence of G2(x/z) in the denominator of the r.h.s. of dz/dx makes, at least inprinciple, not correct to simply sum the neutrino contribution with the QED one.

In particular we have 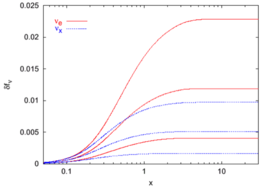 Asymptotically, as x → ∞,  the prediction of the instantaneous decoupling approximation gives 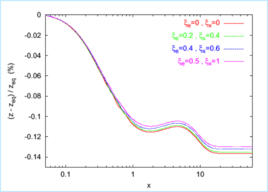 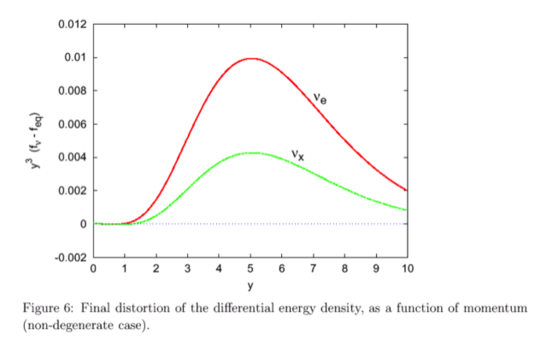 The asymptotic distribution functions are not perfectly thermodynamical distributions (out of equilibrium effects).

The effective number of neutrino species is used to parametrize the energy density stored in relativistic species, ρR, through the relation

where ργ is the energy density of photons, whose value today isknown from the measurement of the Cosmic Microwave Background (CMB) temperature.

The previous exprtession can be also written as

Finally, from the previous definitions it is straightforward to get the following expression

In the Table are reported the values assumed by the several factors when different effects are considered.

We now consider the possibility that, at the stage of neutrino decoupling, there are extra relativistic degrees of freedom, provided by some X field excitations, which are assumed to have a thermal distribution with some temperature TX. Their contribution ρX to the total energy density of the Universe can be parametrized in terms of an additional contribution

in the effective number of neutrinos, as previously defined

and we have defined zX= TX a(t). The parameter gX depends on the spin (gX=1 for a real scalar, gX=7/4 for a Weyl spinor, etc.) as well as on the additional internal degrees of freedom of the X particles. Notice that if the X excitations have decoupled  between μ± and e± annihilation phases we simply have NX= 4/7 gX . For an earlier decoupling we have instead NX< 4/7 gX.

The presence of ρX, apart from introducing a new contribution to

induced by incomplete neutrino decoupling, as well as the asymptotic photon temperature zfin. In fact since their energy density increases the expansion rate of the Universe, we expect

to decrease with growing NX, and the ratio

to become closer to unity, since neutrino decouplingprocess starts at earlier times.

If we denote with

The effect for massive neutrinos

As it is seems more and more clear from neutrino experiments on solar and atmospheric neutrinos, it is unlikely that neutrino mass differences may be greater than ≈ 0.1 eV, unless we enlarge the standard scenario introducing sterile neutrino states. At the same time, it is also quite well established from Tritium decay data that νe mass is bound to be smaller or, at most, of the order of 1 eV. It is therefore clear that in this scenario all neutrino masses are completely negligible as far as their decoupling is concerned. However if their values is as large as ≈ 1 eV, they start to be relevant as the temperature approaches the range relevant for CMB, and the presence of a finite mass modifies of course the neutrino contribution to

. It is interesting to consider how the effects of incomplete decoupling and QED thermal effects just studied would now affect the neutrino energy density. This is conveniently parametrized by the (time dependent) quantity

Since for mα ≈ 1 eV active neutrino are fully elativistic for temperatures of the order of MeV, so we can still take at the e± annihilation phase the results previously obtained, it is easy to see that 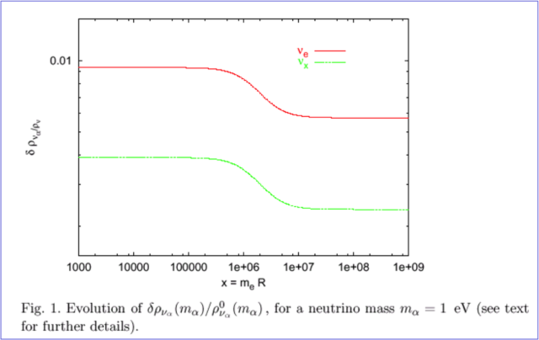 1. Rèsumé of standard cosmology in FRWL

2. Thermodynamics of the expanding universe