The theory of cosmological perturbations in an expanding universe is the main frame to describe the structure formation and to calculate the flactuations measured in the Cosmic Microwave Background radiation (CMB). Even though at large scale the universe appears essentially homogeneous and isotropic, nevertheless at some extent small perturbations had to be present in the primordial universe in order to allow the formation of galaxies, and clusters that we observe at present. The idea is that small primordial perturbations have grown up due to the expansion till to reach the scales of cosmological/astrophysical structures.  The theory of cosmological pertubations studies the evolution of such primordial disomogeneities. The gravitational instability is a natural property of gravitation, and the presence of small regions of overdensities yields an attractive force on the matter placed around, which collapsing on the overdensities enhances the process. Nevertheless, such positive feedback, that in a static universe would cause an exponential instability, is partially counterbalanced by the universe expansion. This results in a power law growth of perturbations.

From a mathematical point of view, one must solve Einstein’s equations in a framework of an expanding universe, taking into account at the same time the freedom to choose a generic reference frame (gauge choice). Such freedom is responsible for the appearence of fictitious  perturbations, which do not describe any real disomogeneity, but rather the properties of the reference frame chosen.

Let us consider for example a homogeneous and isotropic universe, whose energy density be described by

In a different reference frame,

Note that the perturbation

has no physical meaning but is only due to the choice of reference frame. In an analogous way one can eliminate real perturbations through the choice of particular frames. Since physical quantities have to be gauge independent, it has been developed a gauge-invariant formalism which will be briefly reviewed in the following. 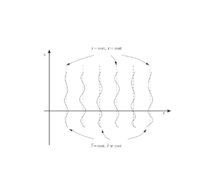 Let us assume that the space-time is in first approximation homogeneous and isotropic and the deviation from this behaviour is small enough to treat it as a perturbation. In this case it is convenient to split the metric in two contributions: an homogeneous and isotropic one describing the background, and an additional term representing the perturbation.

where η is the conformal time dη=a-1 dt. In case of FRW metric we have

where K=0,1,-1 as previously discussed. The Einstein’s equation in natural unit reads

where Rμν is the Ricci tensor, R the scalar curvature, whereas Tμν is the energy-momentum tensor. Using the FRW metric the equations become

where  the symbol ‘ stands for d/dη .

For an isotropic universe, as described by FRW,  the spatial part of Ricci tensor, Rij, is proportional to a δij, hence to satisfy the Einstein’s equation the spatial components of energy-momentum tensor have to be diagonal

. From the Einstein’s equation one derives the continuity equation for matter

where the perturbations are encoded in the term

In the linear approximation different perturbations evolve independently and hence they can be studied separately. The perturbation of a metric can be of three kinds: scalar, vectorial and tensorial. The classification concerns the way in which the different fields involved  in

transform under the Lorentz group. Vectorial and tensorial perturbations do not show instability. The first ones decay in an expanding universe, whereas the tensorial lead to gravitational waves  that do not couple to disomogeneity in the energy density and pressure. Scalar perturbations are more interesting since they can have a role in the growing of disomogeneity and thus affect the dynamics of matter.

There are two ways to form a tensor like δgij starting from a scalar field:

1) multiplying the tensor γij for a scalar field;

2) deriving two times a scalar field by means of the covariant derivative.

Two additional scalar fields are then necessary to fully characterize δgμν . One is required for δg00, whereas δg0i can be derived in terms of the spatial derivative of a second scalar field, respectively.

In summary, the most general form of a scalar perturbation of the metric can be written by using four scalar fields: φ, ψ, B and E

In terms of such expression the complete line element reads

vectorial perturbations can be written in terms of two vector fields, hereafter denoted by Si and Fi , which satisfy the following conditions

Since each vector field can be split into a solenoidal part (divergenceless) plus the gradient of a scalar, if such conditions were not satisfied the scalar component would be in general not vanishing, and hence the perturbation would result not purely vectorial. The perturbation to the metric for the vectorial component results

The tensorial perturbations are constructed in terms of a symmetric tensor hij, which satisfies the conditions

Such conditions ensure that hij does not contain terms behaving as scalars or tensors. The metric for tensorial perturbations reads

that is characterized by the space-time function ξμ. In a particular point of space-time the metric tensor can be written in the reference frame

by using the transformation law

where we have considered the linear terms in δg and ξ only. In the new frame we can separate the metric in the background and perturbation as

denotes the FRW metric in the reference frame

. Comparing the two previous expressions for the metric and considering that

we get the following law of transformation

is a vector divergenceless and

Let us choose an unperturbed FRW metric, spatially flat (K=0). From the gauge transformation condition we get

From which it is possible to obtain the transformation law for each kind of perturbation.

- The gauge transformation for a scalar perturbation -

Combining  φ, ψ, B and E it is possible to define an infinite number of gauge-independent variables. The most simple combinations of these fields are

The variables Φ and Ψ have been introduced by Bardeen for the first time, they have an intuitive physical meaning and have simple EoM.

The gauge freedom can be used to fix additional conditions on the function φ, ψ, B and E, this by choosing in a proper way

A particular choice of reference frame consists in fixing B=E=0 (longitudinal gauge). In this case the condition E=0 fixes

, which consequently by using the condition B=0 determies univocally

. In this gauge the scalar variables of the metric take the form

, hence it is sufficient a single variable to describe the perturbation of the metric, which in this case can be regarded as a generalization of Newton gravitational potential. This is at the basis of the alternative name given to the longitudinal gauge, i.e. conformal newtonian gauge.  Observing the form of the metric, the gauge-invariant variables have a clear physical meaning they represent the amplitude of metric perturbations in the conformal newtonian gauge.

For vectorial transformations the metric reads

and the variables Si and Fi transform as follow

is gauge-invariant, hence only two of the four independent Si and Fi characterize the physical perturbation.

For tensorial transformations the metric reads

and hij is invariant for coordinate transformation. Such field describes in a gauge-invariant way the gravitational waves.

for small disomogeneities in a FRW. The Einstein tensor

. As already stated before in order to satisfy the Einstein equation the energy-momentum tensor must obey the following conditions

For small perturbations one has

and once linearized the equations become

are gauge invariant, but combining them with the metric perturbations one can obtain the following gauge-invariant quantities

In an analogous way for

However, it is possible to rewrite the EoM for the perturbations in  the following form

In particular the term

can be rewritten as a function of the gaige-invariant variables Φ, Ψ.

The general form of the gauge-invariant EoM for cosmological perturbations

The Equations have been obtained without fixing any gauge condition and hold in any reference frame. In order to complete the set of equations it is necessary to know the EoM for the matter fields.

At high energy it is reasonable thinking to describe the matter in terms of fields. In many models of early universe are hypothesized stages dominated by scalar field dynamics. The main characteristics of a scalar dynamics concerns the possibility  to have a not vanishing constant field background without breaking Poincaré invariance. If the field is trapped in a potential minimum, at a constant energy density would correspond a de Sitter phase. In this phase the universe scale factor would grow exponentially (better known as inflation). If we consider the matter field described by a scalar field minimally coupled with gravity its action reads

where V(φ) is the potential of scalar field. The corresponding energy-momentum tensor

In a homogeneous and isotropic universe, where the scalar perturbation of the metric have been previously described, even the scalar field can be approximated as almost homogeneous. In this case it is possible to decompose

is the homogneous part, whereas

is a small perturbation. In the same way the energy-momentum tensor can be decomposed in a background term plus a perturbation

and of the metric

and the perturbation contribution up to the first order

where Φ is the potential gauge-invariant and

is the gauge-invariant part of the scalar field perturbation.

. Combining such relations we get the EoM for

, however it results much simpler to obtain the EoM by linearizing the Klein-Gordon equation for the field

The previous equation can be rewritten as follows

For perturbation of small wavelength

. For perturbations of large wavelength

the second term of the equation can be neglected so obtaing

where C1, C2 and A are integration constants.

The expressions for Φ and

can be obtained by using the definition of u and its EoM. For small wavelength we have

whereas for large wavelength we get

where “the dot” denotes the derivation with respect to physical time

Among the main applications of the theory of cosmological perturbations plays a main role the study of inflationary models. As already stated in the previous trasparencies the great advantage of inflation is to allow, for perturbations produced inside the Hubble radius,  to grow up till to reach scales of the order galaxies and clusters. All this is possible if the inflationary period is larger than 65 H-1. Inflationary models characterized by a single inflationary period during which the Hubble parameter is constant predict a Harrison-Zel’dovich spectrum (all modes are amplified in the same way). By using the results obtained for fluctuations with small wavelenght, the amplitude of metric perturbation Φ results proportional to

the variation of Φ is negligible. In particular for a quadratic potential the amplitude

is exactly constant. After a sufficient expansion, the perturbations with wave number k reach the regime of large wavelength, and hence

where the expansions have been obtained by means of iterative integrations by parts. Note that the series result to be of asymptotic type.

it is possible to consider the first term only. Moreover, taking into account that in this period we also have

and using the EoM for the background we have

At the end of the inflationary period, the scalar field decays in relativistic dof and the universe scale factor grows up with time according to a power law

. From this it follows that

which is almost independent of time. In this case, A is the same constant already appearing in the previous two relations from which one gets

In the previous equation it is necessary evaluate

and the Hubble parameter H at the time in which

namely, when the wavelength of the perturbation crosses the Hubble radius. 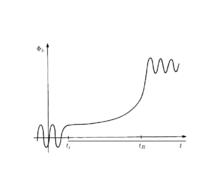 Evolution of the gauge-invariant gravitational potential for a plane wave with wave number k during the inflationary epoch. Note that t_R denotes the reheating time.

1. Rèsumé of standard cosmology in FRWL

2. Thermodynamics of the expanding universe