Interaction of radiation with matter (cont’ed):

The scattering of a photon by an electron where the photon energy is much less than the rest mass of the electron.

The classical treatement assumes that the electric charge oscillates under the effect of an incoming sinusoidal electromagnetic wave.

In this case the Thomson cross section can be derived starting from the Larmor formula, describing the total energy radiated by an accellerated charge (Figure 2)

This radiation is polarized with the electric field oriented as the acceleration vector (Figure 1) and its spectrum depends on the time-dependent particle acceleration.

Figure 1: Schematic representation of the electric field produced by an accelerated charge. 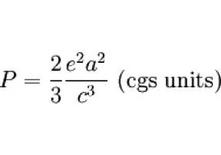 Figure 2: Larmor formula for the energy radiated by an accelerated charge.

The full derivation of the Thomson cross-section presented by an electron to an incoming photon in the case of Thomson scattering is given in Longair (2nd Edition, Volume 1, p92-96).

The total Thomson cross-section, σT, is given by the following expression (re is the classical electron radius):

is the classical electron radius 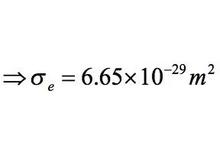 If N = number of particles per m3, then the area blocked by a square meter of material is

If the absorbing material extends for a distance R along the line of sight then the optical depth will be given by:

and the transmitted flux will be 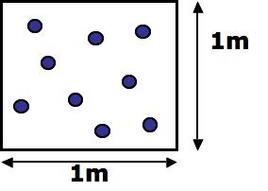 Area blocked to the passage of radiation due to Thomson scattering.

If photons have a much higher energy we have Compton scattering, where photon lose some of their energy which is transferred to the electron.
The Compton treatement must be used when hν~mec2 or ve~c in the electron rest-frame.
If hν << γ mec2 instead, we are back in the Thomson regime.

Schematic representation of Compton scattering on a free electron. This scheme applies when the total energy of the electron is much smaller than the one of the photon. 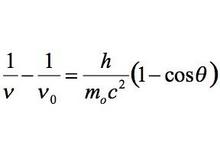 Frequency change due to Compton scattering.

This effect of cooling the radiation (ie because it loses energy) and transferring the energy to the electron is sometimes called the recoil effect.

For very high energy electrons, the approximation of electrons at rest does not hold anymore and the proper quantum relativistic cross-section for scattering must be used.

Also, if the electron is moving ultrarelativistically, the quantum relativistic cross-section must be used and this is given by the Klein-Nishina formula. The details of the calculations can be found on Longair, Volume 1.

Compton scattering has the effect of broadening spectral lines and washing out edges. 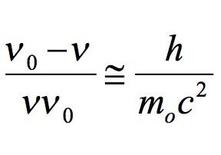 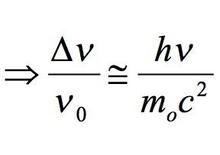 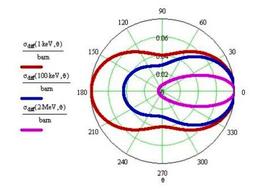 The experimental scattering cross section at different incident energies. At the low energy range of about l Kev, the cross section shows minima at = 90o and 270o, and maxima at = 0o and 180o. Asymmetric patterns appear at higher energy with the maximum shifted to the forward direction. 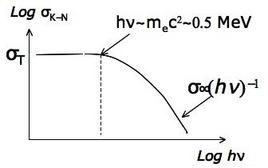 An electron-positron pair can be created when a gamma-ray collides with another photon. In the process, the gamma-ray is absorbed.

Using Energy and Momentum conservations, and relativistic invariants it is possible to derive the minimum energy of the gamma-ray required for this process to occur, as shown here on the right and schematized in next slide. 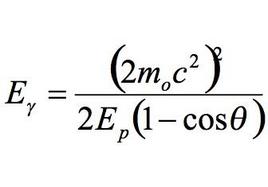 Energy of the γ-ray required to produce an e+/e- pair.

Two photons, one of which must be a γ-ray with E > 2mec2, collide and create an electron-positron (e-/e+) pair. This is therefore a form of γ-ray absorption.

The minimum energy is obtained for a head-on collision (theta=180 deg) and zero momentum of the e+/e- pair.

Its value is found by simply making the denominator of the expression shown in the previous slide as large as possible, i.e. when cos(θ)= -1, or when θ=180 degrees.

And the minimum γ-ray energy is given by:

Note that the minimum energy is also inversely proportional to the energy of the photon with which it interacts.

While in the laboratory, it is more usual to consider photon-nucleus production, this process is usually ignored in astrophysics.

In fact while photons and nuclei have a similar cross-section (~10-29 m2), and the γ-ray does not differentiate much between another photon or a nucleus, the space density of background (3K) photons in space is much larger (~109 m-3) than nuclei (~106 m-3).