Carl Seyfert has been one of the first astronomers to realize that some galaxies were characterized by peculiar compact and bright nuclei.

Five of these galaxies are spirals, except NGC1275 which is a peculiar irregular galaxy.

Since them the term ‘Seyfert galaxy’ is used to name a whole class of active galaxies, i.e. galaxies whose emission cannot be explained only by the combined emission of their stars. 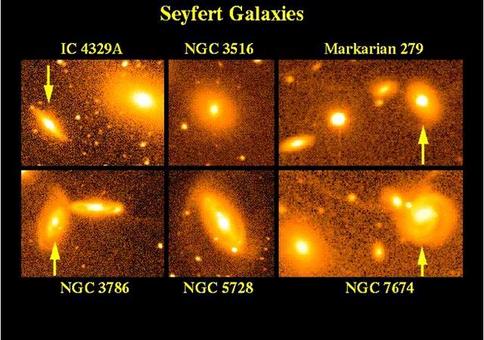 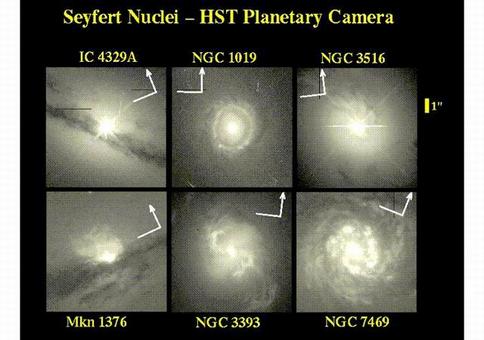 Seyfert galaxies were originally noted as having unusually bright, compact (starlike) nuclei. Some of these are shown in this selection of closeups taken with Hubble Space Telescope. In many of these, the nuclei are strongly overexposed to show the surrounding galaxy, producing diagonal diffraction spikes and other image artifacts. 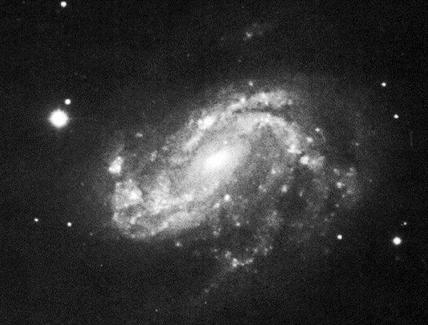 Nuclear region of some nearby Seyfert galaxies. NGC 4051 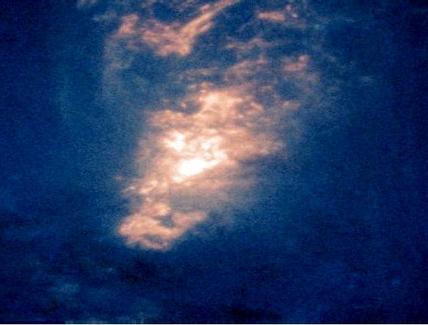 Nuclear region of some nearby Seyfert galaxies. NGC1068 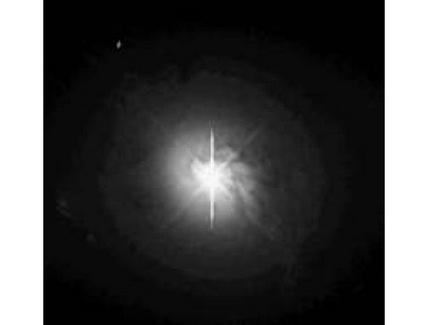 Nuclear region of some nearby Seyfert galaxies. NGC3565 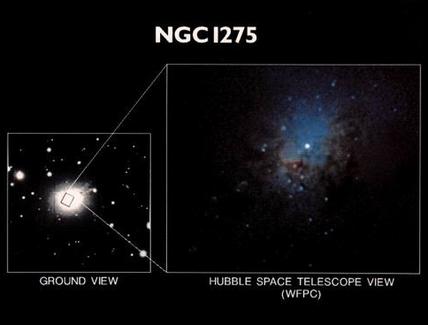 Nuclear region of some nearby Seyfert galaxies. NGC1275

In 1963 B.E. Markarian publishes the results of the study of 14 peculiar galaxies showing evidence of non thermal emission, i.e emission not directly produced by stellar atmospheres. The sample included all galaxies analyzed by Carl Seyfert.

Markarian started a survey (with the 1m Schmidt telescope of the Byurakan Observatory in Armenia), selecting a sample of objects with a blu-UV excess in their spectral continuum, which resulted in the publication of a catalog containing approximately 1500 galaxies: the so called “Markarian galaxies”.

Actually this is not a separate class of AGNs, but a sample of low-redshift objects with a peculiar blu-UV spectrum. 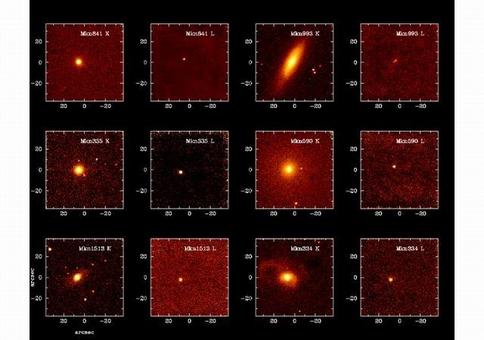 A compilation of Markarian galaxies, as seen from ground based telescopes. 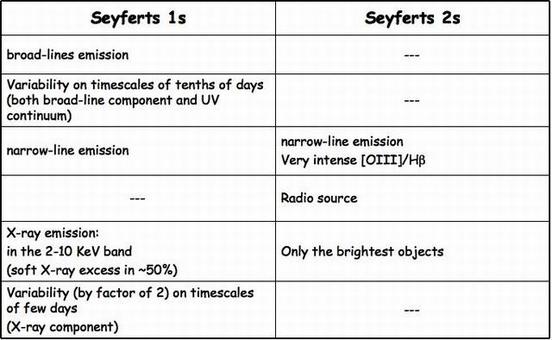 The Discovery of QUASARs

Quasars were identified for the first time (around the 1950s) as strong and extended radio sources. Since their optical counterparts were pointlike, as observed from ground telescopes of the time, they were labeled QSRSs (Quasi-Stellar Radio Sources), or QUASARs.

The optical emission seen in QUASARs is variable on timescales of months (much less in some sources, and faster at shorter wavelengths) suggesting that the emissing resion is small: the size of the region cannot be larger that the timescale on which the light crosses the region.
This suggests that the region producing the variable emission is at most 1 ligh-year across.

The radioastronomers of the Jodrell Bank used the lunar occultation method to measure the position of this source that they believed to be extragalactic.
Based again on the Palomar photographic plates (taken by Rudolph Minkowski) the optical counterpart looked like a 13° magnitude star, sourrounded by a faint nebulosity.
The spectrum of 2C273 revealed hydrogen llines corresponding to a redshift of 0.16 (i.e. a relative speed of ~16% of c). Thus this source is located ~685 Mpc away (H0=70).
From this distance we can estimate the absolute magnitude of the object as:

Since the Sun has MV=4.8 we can derive the luminosity in terms of Solar luminosities L☼: 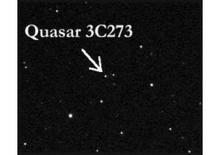 The QUASAR 3C273 as seen on photographic plates. 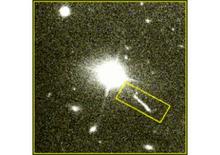 A high resolution image of 3C273 revealing the presence of a bright jet.

The position of this source was found (within 5 arcsec accuracy) in 1960 by Caltech astronomers and the optical counterpart was identified on a photographic plate taken by Alan Sandage at the 5mt telescope of Mt. Palomar, where it looked like a blue star of 16° magnitude, associated with a faint nebula of very low surface brightness 12 x 5 arcsecondis with the radio source off-centered.
Furthermore the spectrume revealed the presence of broad emission lines, which were hard to identify. A long controversy on the nature of this source followed, and in the end it was recognized that it had a redshift of 0.37. 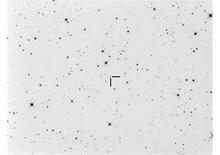 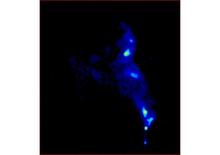 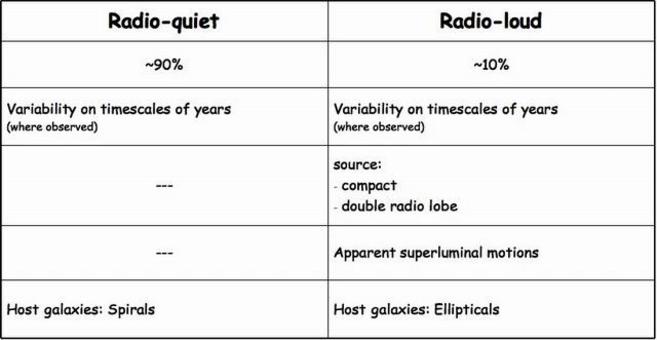 At low luminosities they are indistinguishible from Seyferts 1s: this is due to the fact that probably it is the same class of objects, divided by observational limits: difficult to disentangle the bright nucleus of the QUASAR from the host galaxy. 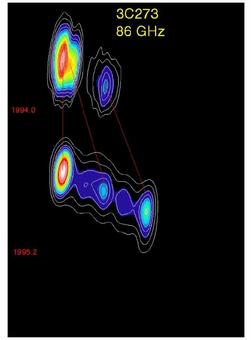 3C 273 at radio wavelengths, and it's evolution in time. This is an image of the very central part of the radio jet, revealing the presence of very fast moving plasma. 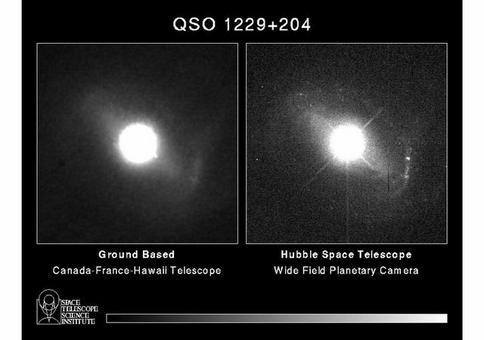 Ground telescope and HST images of QSO 1229+204. The HST resolution reveals the presence of the host galaxy with a spiral structure.

Blazars represent a class of extremely “violent” objects: their emission extends to gamma-ray energies and they vary on very short timescales.
Many of the brighter blazars were first identified, not as powerful distant galaxies, but as irregular variable stars in our own galaxy. These blazars, like genuine irregular variable stars, changed in brightness on periods of days or years, but with no pattern.

The early development of radio astronomy had shown that there are numerous bright radio sources in the sky. By the end of the 1950s the resolution of radio telescopes was sufficient to be able to identify specific radio sources with optical counterparts, leading to the discovery of quasars. Blazars were highly represented among these early quasars, and indeed the first redshift was found for 3C 273 — a highly variable quasar which is also a blazar.
In 1968 a similar connection between the “variable star” BL Lacertae and a powerful radio source VRO 42.22.01 was made. BL Lacertae shows many of the characteristics of quasars, but the optical spectrum was devoid of the spectral lines used to determine redshift. Faint indications of an underlying galaxy — proof that BL Lacertae was not a star — was found in 1974. The extragalactic nature of BL Lacertae was not a surprise. In 1972 a few variable optical and radio sources were grouped together and proposed as a new class of galaxy: BL Lacertae-type objects. This terminology was soon shortened to “BL Lacertae object,” “BL Lac object,” or simply “BL Lac.” All known BL Lacs are associated with core dominated radio sources.
The name “blazar” was originally coined in 1978 by astronomer Edward Spiegel to denote the combination of OVV quasars and BL Lac objects. An optically violent variable quasar (OVV quasar) is a type of highly variable quasar. It is a subtype of blazar that consists of a few rare, bright radio galaxies, whose visible light output can change by 50% in a day. They are similar in appearance to BL Lacs but generally have a stronger broad emission line, and tend to have higher red shift components. 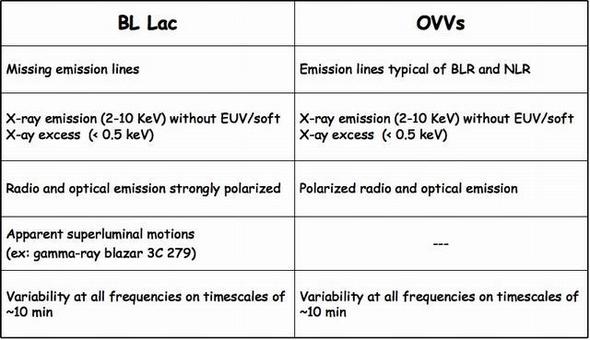 Summary of the main properties of BL Lacs and OVV quasars. 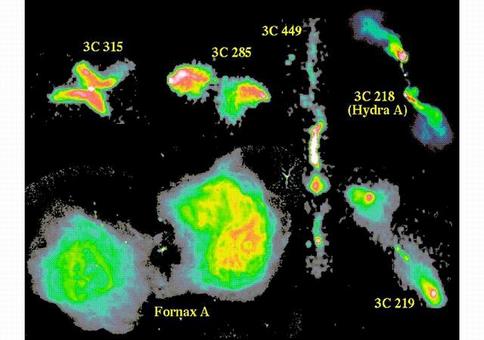 A compilation of radio galaxies, showing that these objects can appear with extremely different morphologies: copact, extended, single or double lobed.

A low-ionization nuclear emission-line region (LINER) is a type of galactic nucleus that is defined by its spectral line emission. The spectra typically include line emission from weakly ionized or neutral atoms, such as O, O+, N+, and S+. Conversely, the spectral line emission from strongly ionized atoms, such as O++, Ne++, and He+, is relatively weak.The class of galactic nuclei was first identified by Timothy Heckman in the third of a series of papers on the spectra of galactic nuclei that were published in 1980.
LINER galaxies are very common; approximately one-third of all nearby galaxies (galaxies within approximately 20-40 Mpc) may be classified as LINER galaxies. Approximately 75% of LINER galaxies are either elliptical galaxies, lenticular galaxies, or S0/a-Sab galaxies (spiral galaxies with large bulges and tightly-wound spiral arms). LINERs are found less frequently in Sb-Scd galaxies (spiral galaxies with small bulges and loosely-wound spiral arms), and they are very rare in nearby irregular galaxies.

LINERs also may be commonly found in (ultra) luminous infrared galaxies (ULIRGs), a class of galaxies defined by their infrared luminosities that are frequently formed when two galaxies collide with each other. Approximately one-quarter of LIRGs may contain LINERs.LINERS tend to inhabit spiral galaxies, while ULIRGs reside in ellipticals or bulge-dominated spiral galaxies (probably the result of interactions or merging).
In any case the association of these classes with the presence of nuclear activity is still debated, since their properties can be explained by starburst events (shocks and winds) and Sne (producing the observed radio emission).

These represent a class of AGNs very debated, since their properties can be explained by starburst events (shocks and winds) and Sne (producing the observed radio emission). LINERS tend to inhabit spiral galaxies, while ULIRGs reside in ellipticals or bulge-dominated spiral galaxies (probably the result of interactions or merging). 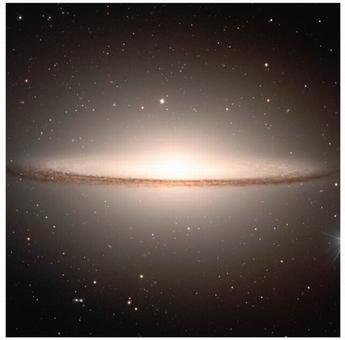 The Sombrero galaxy, a nearby (9 Mpc) spiral galaxy, is a famous example of a LINER.

We presented different types of astronomical sources discovered for peculiarities in their specta, temporal behaviour and/or morphology.
We intend to show (in next lecture) that they are all part of the same class of astronomical objects called AGN (Active Galactic Nuclei):