What do these objects have in common? 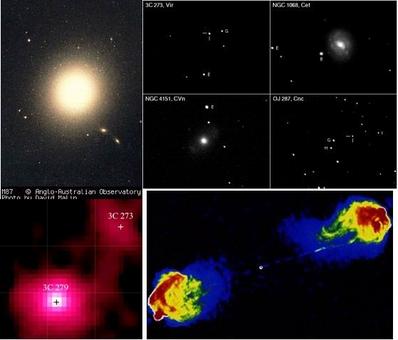 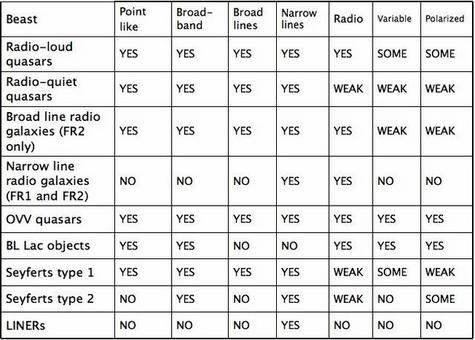 Properties of the different AGN classes.

The optical spectra of AGNs, as described in the previous lecture, can present different features: 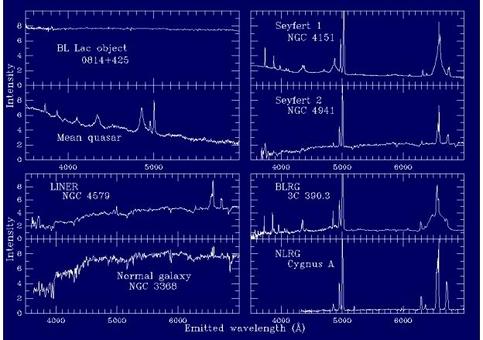 Optical spectra of different AGN classes: the very different appearance can be explained by the Unified model described in this lecture.

Exercise:
Show that the previous condition means that approximately the same amount of energy is emitted for each decade in frequency.

This property is very unusual since the emission of most other astronomical sources peaks at a specific frequency, which reflects the the underlying physical process. 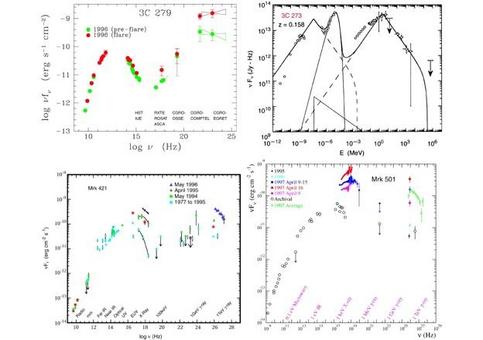 AGNs are characterized by intense variability at all frequencies, but this variability is increases at higher energies.
X-ray variability of Active Galaxies is `FRACTAL’, or scale invariant, on short timescales, and very similar to what is commonly observed in galactic black hole systems.

This behavior is better visualized in the Power Density spectrum, which has a power law shape with slope between -1 and -2.
Note that if the PDS has slope -1 the total Power would diverge, so scale invariance must break on longer timescales.
In general we often see a high and low frequency change in the PDS slope.

PDS of NGC5506: the shallow slope on long timescales steepens at high frequencies. 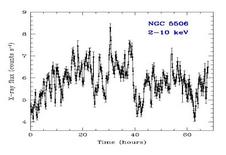 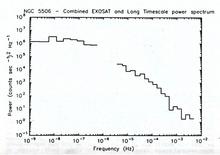 PDS of NGC5506: the shallow slope on long timescales steepens at high frequencies. 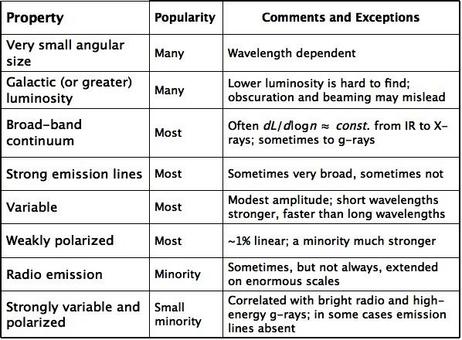 To understand the AGN physics let's summarize all the properties of the emission observed (more or less frequently) in the different source types. 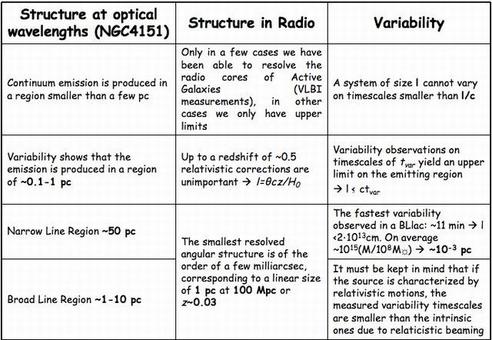 Direct observations allow to constrain AGN sizes, which are not resolved even with space observatories.

The phenomenology described so far points toward the production of an enormous amount of energy within a small volume. Several candidates have been proposed to explain the observations:

These candidates could be responsible for the large energy output within a compact region, and possibly justify the observed variability (even though the whole phenomenology is hard to account for).
Some simple quantitative considerations described in the next few slides will show that the latter candidate is the most plausible one.

Assuming that a source varies in intensity, photons leaving on different sides of the source (A and B in the Figure) will arrive at the observer with a delay of

the observer will be detecting photons that left the source at the same instant t, and thus characterized by the same intrinsic intensity.
A change over a timescale

, implies a maximum value for the diameter d, because we know that our measured timescale must be larger than the light crossing time.
For variability timescales of the order of days (~105 s) the emitting region has a size of ~1015 cm=10-3 pc. 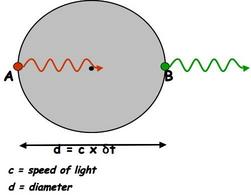 As discussed in Lecture 13 about X-ray binaries, in the assumption of spherical accretion it is possible to derive the Eddington limiting mass and luminosity of the accreting object considering that radiation pressure cannot exceed gravitational pull.

The upper limit in luminosity, LEddington scales with mass of accreting source:

Thus a source with a luminosity of

if it has to be in equilibrium. This limit can be lowered somewhat if the accretion process is not spherical, but in any case the required mass is much larger than allowed for conventional products of stellar evolution (massive stars, neutron stars or stellar Black Holes).

An object with this mass has a Schwarzschild radius

Thus, considering the upper limit on the size derived from variability in the previous slide, we conclude that the source must be a supermassive Black Hole since it is smaller than its Schwarzschild radius.

Summarizing, it is likely that AGNs are all manifestations of accretion onto a supermassive black hole.

This is deduced from: 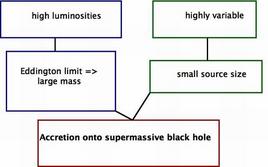 The observed properties of AGNs points toward the accretion onto a supermassive Black Hole as the physical process responsible for the energy production.

The most efficient energy production process is represented by accretion of matter onto a compact object.
The energy available for release is approximately equal to the gravitational potential energy of a particle (hydrogen) falling from infinity onto the compact object:

The efficiency is defined as the ratio between the released energy and the rest-mass of the accreted matter:

is the amount of accreted mass. In the next slide we show the typical efficiency values for different processes. 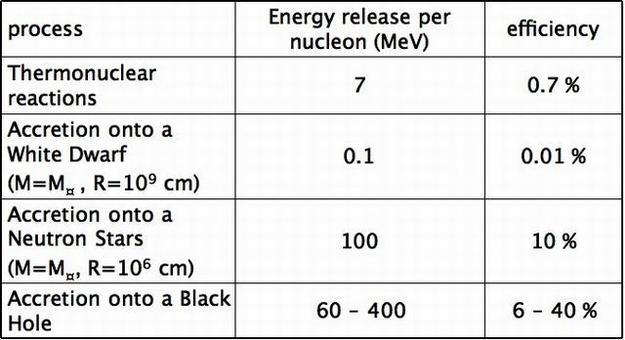 The production of such a large energy amount within the nucleus calls for a very efficient process in converting matter into energy. The table below compares the efficiency of different astrophysical processes.

The whole fenomenology described in the previous lecture can be accounted for assuming that al AGN classes correspond to the same basic phenomena: a supermassive Black Hole powered by the release of gravitational energy through an accretion disk.

This central engine is surrounded by fast (BLR) and slow (NLR) moving clouds. The whole accretion disk and BLR are further surrounded by a dusty torus which can hide the AGN core if viewed edge-on (see next slides), leaving only the narrow lines in optical spectra.

The disk feeds jets and powers them by releasing gravitational energy. Since the Black hole is likely spinning the jets are formed parallel to the spin axis, perhaps confined by magnetic fields.

If viewed along the jet, relativistic beaming boosts the emission and increases variability, often resultin in apparent superluminal motions.

This basic picture can be modified in many ways (for instance the torus is probably more similar to a thick clumpy disk ending in the BLR) but the overall scheme describing the observation is now widely accepted. 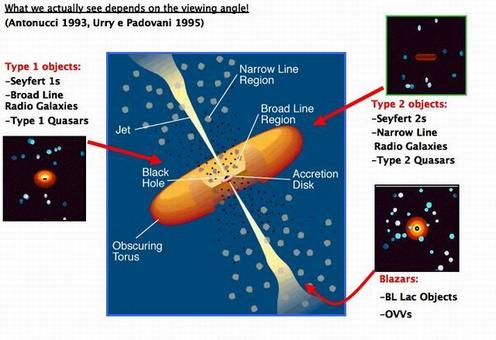 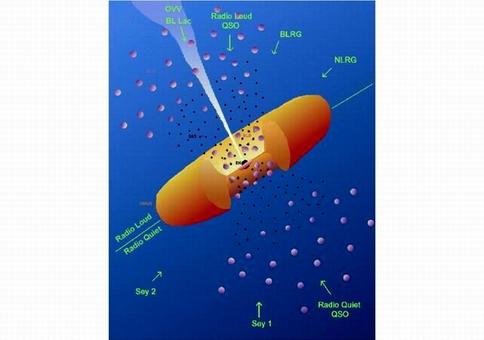 What we see depends on the viewing angle (Urry e Padovani 1995).

Based on what we discussed so far we can conclude that AGNs are powered by accreting supermassive Black Hole.

The animation on the right shows a trip toward the central engine of the AGN. It starts hundred of Megaparsecs from the Active Galaxy, then it zooms-in passing through the blue/young stellar population in the galaxy disk of Spiral galaxies and the red/older population of the bulge (only a few thousand are shown here compared to the hundred billions of a real galaxy). In a quasar the luminosity of the nucleus would outshine the whole galaxy.

In the center of the bulge we can see the NLR as blue clouds of gas outside the dusty torus; closer to the nucleus green and yellow clouds represent the fast-moving BLR. Finally there is an accretion disk feeding the central BH, from which the relativistic jet originates.

The whole animation spans 10 orders of magnitudes in linear size (the first frame is 10 billion times the size of the last one). 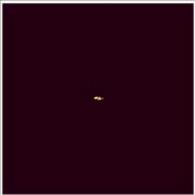 A travel through the Active Galaxy reaching the central supermassive Black Hole. 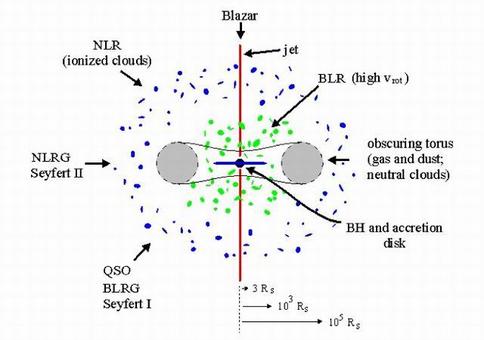 The AGN zoology depends on the viewing angle which exposes or hides different regions of the AGN structure.

We see Type 1 objects when the nucleus is only partially obscured, and we are able to see directly the central region.
Thus the spectrum will reveal both broad and narrow line regions, as well as the emission of the accretion disk. 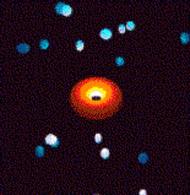 Orientation of Type 1 objects with respect to the line-of-sight.

Looking the system edge-on the central region, the supermassive BH and the accretion disk are obscured (hidden by absorption) We are left with emission from the NLR (which extends outside the obscuring torus) and from the torus itself (mainly in the infrared).
It is sometimes possible to reveal part of the BLR and nuclear emission through the scattered radiation lying above the dusty torus. 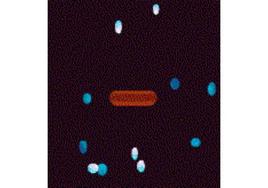 Orientation of Type 2 objects with respect to the line-of-sight.

These are objects observed face-on, where the jet points toward the line-of-sight.
Due to relativistic effects the radiation is beamed anc may vary on very short timescales.
When the continuum emission from the jet hides spectal lines we obtain a BL Lac.
Optically-Violent Variables are similar but broad e narrow components are still visible. 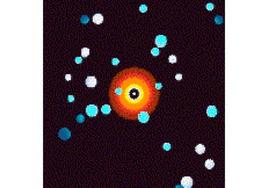 Orientation of Blazars with respect to the line-of-sight.