Let’s summarize the most likely structure of the AGN power source: 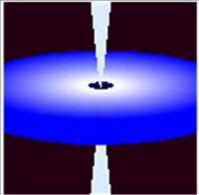 Schematic structure of an accretion disk with jets.

The accretion disk (AD) can be considered as rings or annuli of blackbody emission.

It is assumed that the disk is geometrically-thin and optically-thick in the z-direction. Thus each annular element of the disk radiates roughly as a blackbody with a temperature T(R) .

The dissipation rate is (see … for the derivation):

where R* is the radius of the black hole (or compact object).

Dissipation through the disk is independent of the viscosity in the disk – and the dissipation rate is the energy flux through the faces of the thin disk.

Thus if the disk is optically-thick in the z-direction, we are justified in assuming that the dissipation rate is equivalent to the blackbody emission. 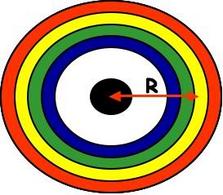 Schematic representation of an accretion disk structure, where each ring is characterized by a specific temperature.

Substituting the blackbody flux equation into the dissipation equation gives the temperature of the disk as a function of radius. At radii larger than the radius of the compact body, the temperature is thus given by:

The temperature of the disk decreases with radius with a power –0.75.

Based on what we derived in the previous slides: 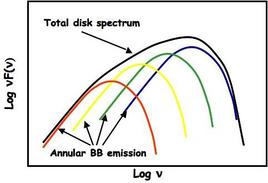 The distance to the inner edge of the accretion disk is proportional to the mass of the central black hole. The temperature, on the other hand, decreases as the radius increases.
Thus the inner edges of large mass black holes are relatively cool, while those of low mass black holes are relatively hot. This means that disks around black holes in AGN are cooler than those around Galactic black hole candidates.
The inner disk edge corresponds to the last stable orbit (LSO) and is thus related to the BH mass. In fact for a non-rotating spherically symetrical BH, the LSO occurs at:

For rotating Black Holes (Kerr Black Holes) the LSO depends on the rotation, and has a lower limit for

Exercise: Derive the maximum energy that can be extracted in the presence of a Kerr Black Hole.
Hint: Find the binding energy at the last stable orbit. 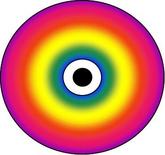 Accretion disk of a low-mass BH 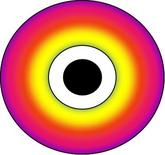 Accretion disk of a high-mass BH

We have seen in a previous Lecture that AGN spectra are approximately flat when plotted as νF(ν). Examining the spectum in the optical to X-ray range we observe peculiar features: 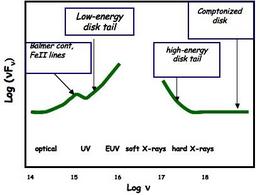 Schematic AGN spectrum from the optical to medium X-rays

Fluorescence line is observed in Seyferts indicating the presence of gas with temp of at least a million degrees.

Fe Kα lines are due to X-ray photons removing an electron from an inner K or L shell. The ion may return to a lower energy state by emitting an electron from a higher shell (this is known as the ‘Auger effect’) – or by a radiative transition (see Lectures on high nergy emission at the beginning of the course). The energy of the Kα line depends on the number of electrons present and depends on the ionization state of Fe, reaching 6.9 keV for FeXXVI.

The ionization state observed indicates gas temperatures which are relatively cool (about a million degrees) and the strength (ie the equivalent width) is quite high, indicating that the gas producing the Fe line has a high covering factor. Fe Kα emission from an accretion disk fits these observations, providing a high covering factor to the source of X-rays (probably the accretion disk corona) and the right temperature in the inner regions, where the line is thought to originate. 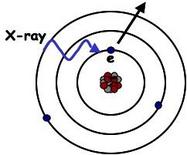 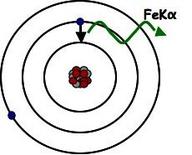 The Fe line is produced in the decay of higher level electrons to the inner shell.

What evidence do we have that the Unified model described in the last 2 Lectures is correct?

Apart from the quantitative considerations about the energy output and the nuclear source size, discussed previously, there are other proofs of the Unified model, among which: 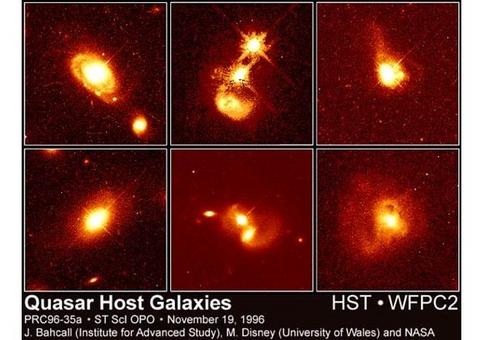 HST allows to reveal the host galaxies of Quasars, supporting the view that they are scaled up versions of fainter AGNs. Furthermore these objects are often in pairs or interacting galaxies. 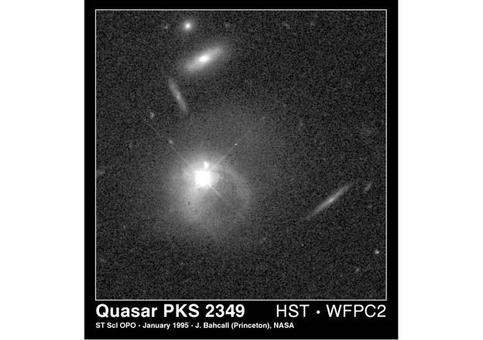 This NASA Hubble Space Telescope image shows evidence for a merger between a quasar and a companion galaxy. Credit: John Bahcall, Institute for Advanced Study, NASA. 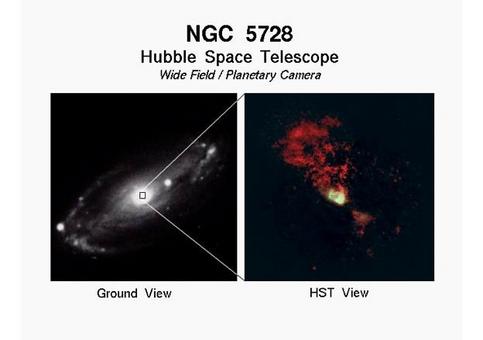 The radiation emitted from the nucleus emerges only in specific directions and is visible due to scattering in the observer line of sight, suggesting the presence of obscuration in the form of a torus which hides the nucleus.

The Broad Lines, with amplitudes corresponding to thousand of Km/s, are believed to be produced through photoionization by the intense emission from the accretion disk close (~1 pc) to the central BH.

Narrow Lines on the other hand do not exceed 1000 km/s and originate in lower density, more distant regions between 10 and 1000 pc from the BH.

In NGC1068, a type 2 Seyfert, part of the light produced in the nucleus is scattered (Thomson scattering, see Lecture 3) into the line of sight by off-nuclear clouds. This radiation can be isolated from the rest since it is polarized (again see Lecture 3).

The observed spectrum reveals the presence of Broad Lines, which are not seen in the unpolarized radiation.
This result, now seen in several Type 2, implies that the BLR is present in the nucleus of these objects as well, but it is hidden to the observer. 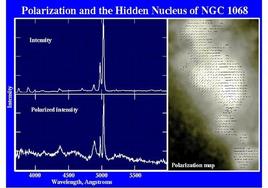 Optical spectrum in unpolarized (upper panel) and polarized (lower panel) light of the Type 2 NGC 1068. The image on the right shows the polarization vectors revealing that the source of the emission lies in the nucleus of the galaxy (small circle).

The presence of a nuclear structure similar to the obscuring “molecular torus” predicted by the Unified model within ~100 lyr, has been observed in several Seyfert galaxies.
Hubble observations of NGC 4261 for instance reveal an optically thick circumnuclear region hiding the central source. 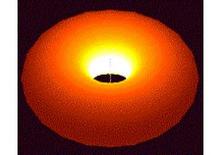 The predicted aspect of the molecular torus surrounding the central BH. 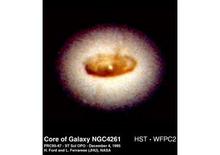 Image of the nuclear region of NGC 4261 with the Hubble Space telescope. 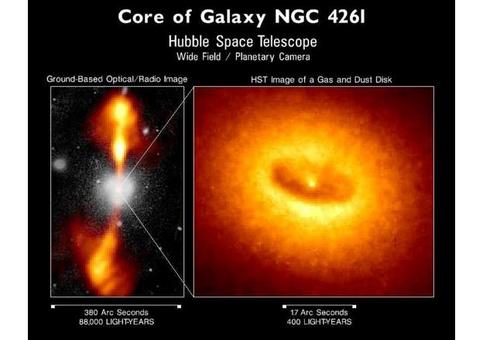 A Hubble Space Telescope image of a giant disk of cold gas and dust fueling a possible black hole at the core of the galaxy. The disk is tipped enough (about 60 degrees) to provide a clear view of its bright hub, which presumably harbors the black hole. 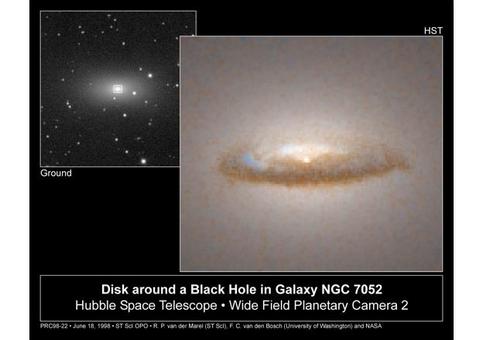 A 3,700 light-year-diameter dust disk encircles a 300 million solar-mass black hole in the center of the elliptical galaxy NGC 7052. The disk, possibly a remnant of an ancient galaxy collision, will be swallowed up by the black hole in several billion years. 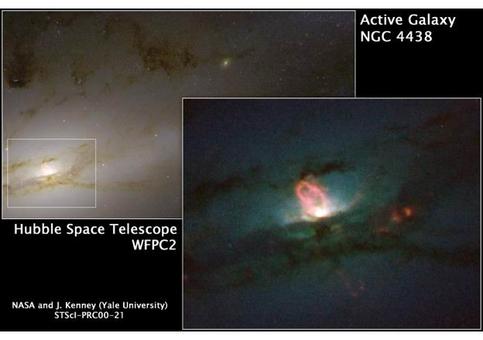 The dust in NGC 4438 hides the intense activity in the galaxy core.

Observing the variation in time of the Hβ line and the optical continuum allows to understand the relation between the disk producing the continuum and the Broad Line Region, where the Hβ emission originates.

The Hβ lags behind the continuum, indicating that it responds to the variation of the nuclear emission delayed by the light travel time between the two regions.

This allows also to estimate the distance between the Disk and the BLR. 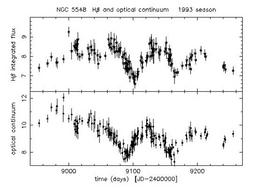 The gas in the core of M87: on one side the disk is speeding away from Earth, at 550 kilometers per second while the other side of the disk is orbiting around at the same speed, but in the opposite direction.

The emission lines on one side are thus red-shifted while on the other they appear blue-shifted.

This high velocity is the signature of the tremendous gravitational field at the center of M87 andevidence that the region harbors a massive black hole. 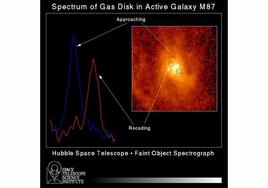 Relativistic effects imprint characteristic profile on sharp spectral features, such as the Fe line described a few slides back.

This represent a proof of extreme gravity in the AGN core and supports General Relativity. 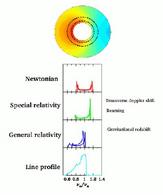 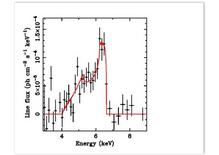 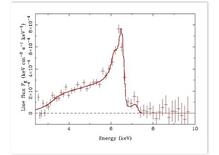 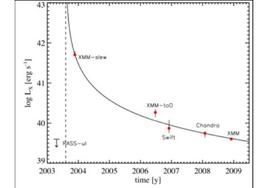 X-ray lightcurve of a candidate disruption of a star in the core of NGC 3599.

The central BH in the Milky Way: SgrA* 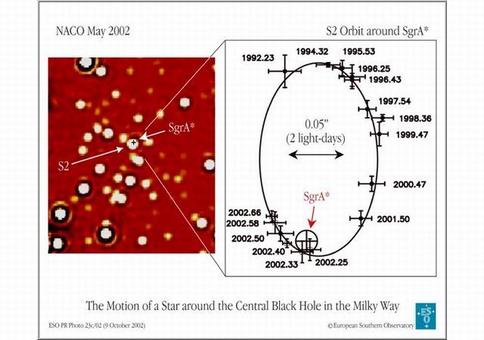 The presence of a massive BH in the core of our galaxy is revealed by the orbital motions of nearby stars.

The central BH in the Milky Way: SgrA* 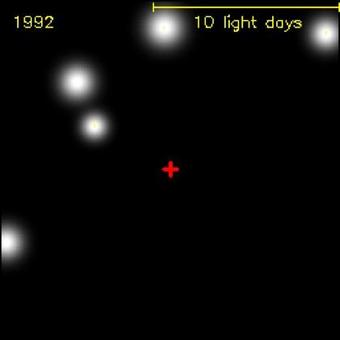 Stellar orbital motions around the supermassive BH in the center of the Milky Way galaxy.