Galaxy clusters are, on average, regular objects that form via the collapse of the most over-dense regions in the early Universe.
In an Einstein-de Sitter (Ω=1) universe in which cluster baryons are heated only by gravitational processes during their collapse, the characteristic clustering mass evolves as

. Since there are no other scales in the problem, the characteristic density of a cluster of mass

can only be proportional to the density of the universe,

. A characteristic mass and density, evolving with redshift according to such relations defines, through the Virial theorem, a characteristic temperature which scales as

. The velocity dispersion will hence scale as

We have seen that the X-ray emission from the intracluster gas is dominated by thermal bremsstrahlung; the characteristic X-ray luminosity then scales as

Such ’scaling relations’ predict the time evolution of a typical cluster (i.e. a cluster with mass equal to the characteristic clustering mass), but they do not describe the evolution of individual clusters or the mass dependence, at fixed redshift, of the X-ray luminosity or other cluster properties.

Without this information, which depends on the internal structure of clusters, it is not possible to assess the cosmological significance of observed correlations such as the luminosity-temperature relation or their evolution.

The simplest model that we can use to describe the cluster structure assumes that:

With the above assumptions, and the further hypothesis that the relative distributions of gas and mass are similar in all clusters, it is possible to derive scaling relations between mass, luminosity, and temperature (velocity dispersion). In particular, we have that:

and, assuming again that bremsstrahlung is the main emission mechanism, and hence that

In this simple model all clusters are expected to be self-similar. This implies that properties of clusters at high redshift are identical to those of their low redshift counterparts, apart from scaling factors reflecting the increase of the mean density of the Universe with redshift: i.e. clusters of a given temperature or mass are expected to become more luminous at higher redshifts, a useful prediction that can be tested observationally.

Scaling relations expected from this simple model can be summarized as follows:

Low-scatter scaling relations are desirable for obtaining accurate mass estimates. To measure the total mass of a cluster accurate measurements of both the gas temperature and density profiles are needed. For most clusters (i.e. distant and poor ones) direct mass estimates are hence hard to obtain; low-scatter scaling relations could overcome this problem.
A precise measure of the scatter in the scaling relations can further provide interesting insights on the physical processes taking place inside clusters.
Entropy-T relation. The solid line shows the expected theoretical relation. A deviation from the expected trend is observed for low temperature clusters. 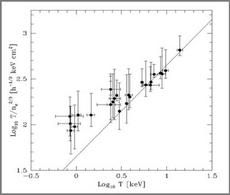 The analysis of galaxy clusters in X-rays has been of paramount importance in cosmology.
In the 1980s X-ray observation of the extended emission of galaxy clusters showed, for the first time, that the mass of the ICG accounted for only 15-20% of the total mass of the cluster (measured under the assumption of hydrostatic equilibrium and spherical symmetry). Since only ~3-5% of the total mass is accounted by the “visible” matter (i.e. stars and galaxies), more than 70% of the mass of a cluster had to be made up by some sort of unknown matter, today widely known as dark matter.
More recently (2006) the spatial displacement between the gravitational potential measured by gravitational lensing in the galaxy cluster 1E0657-558, and the dominant baryonic component traced by the X-ray emitting gas, provided the first observational consistent proof of the presence of dark matter. Without dark matter, the lensing would be expected to follow the baryonic matter; i.e. the X-ray gas. However, the lensing is strongest in two separated regions near the visible galaxies. This provides support for the idea that most of the mass in the cluster pair is in the form of collisionless dark matter.

Cosmology with Clusters – The bias factor

from the cluster centre, within which the average matter density is 2500 times the critical density of the Universe

is depleted with respect to the universal mean, a natural consequence of the thermodynamic history of the gas.

X-ray observations allow a measure of both the mass of the gas and the total gravitating mass in a cluster (see previous lecture), and hence of the its gas mass fraction

, i.e. the ratio between the mass of the gas and the total mass of a cluster:

In clusters, the baryon content is mainly given by the gas, plus a small percentage of star and galaxies. We can hence write the baryon fraction in cluster as:

Latest results from big-bang nucleosynthesis, together with the measure of the abundance of primordial 4He have provided an estimate of the baryon fraction in the Universe: Ωb~0.03. An accurate measurement of the total mass density of the Universe has been possible thanks to the analysis of the cosmic microwave background fluctuations: ΩM~0.27. As a consequence:

X-ray observations of galaxy clusters have shown that the radial profiles of gas mass fractions fgas(r) show a wide scatter at small distances from the cluster center, but that they are approximately universal at r2500 (see figure), hence allowing one of the most accurate measurement of the bias factor ever obtained: 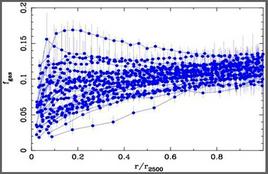 The approach used in the previous slides can also be inverted. Provided that an estimate of the bias factor is available from independent measure, Eq. (3) can be re-written to allow a measure of the matter density content of the Universe ΩM.
In the figures, confidence contours in the Ωm- ΩΛ plane, obtained using different methods, are plotted. Independent techniques span different regions of the same parameter space, hence allowing tighter constraints on the derived cosmological unknowns.

Both figures clearly stress how, combining results obtained from separate approaches, allows a much tighter constraint of the results and how strong is the need for future missions, that can reduce uncertainties up to orders of magnitude. 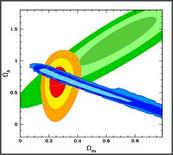 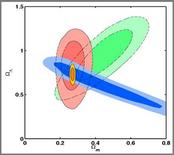 Fig.2: As above, with superimposed, in orange, data expected by Constellation-X.

Dark Energy is the name given to the unknown mysterious form of energy driving the acceleration of the Universe and which, unlike any known form of matter or energy, is gravitationally repulsive.
The discovery of this form of energy, which makes up two-thirds of the total mass-energy of the Universe, ranks as one of the most important discoveries in cosmology, with profound implications for astronomy, high-energy theory, general relativity, and string theory.
Despite the huge effort of large part of the astrophysics community in the past decade, the nature and fundamental properties of the dark energy remain today essentially unknown. 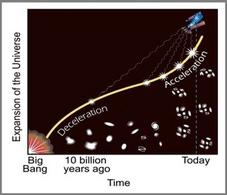 Expansion rate of the Universe.

There is no single `ideal’ experiment with which to study dark energy. The best approach, in the next decade, will be to gather tight, robust constraints from several high quality, complementary experiments and combine them.

A properly executed dark energy program should have among its main goals to determine whether the accelerating expansion is consistent with a cosmological constant and to measure its possible time evolution.

The most accredited techniques are:

Supernovae surveys. Use Type Ia supernovae as standard candles to determine the luminosity distance vs. redshift relation. The SN technique is sensitive to dark energy through its effect on this relation.

Gravitational weak lensing surveys. Measure the distortion of background images due to the bending of light as it passes by galaxies or clusters of galaxies. The WL technique is sensitive to dark energy through its effect on the angular-diameter distance vs. redshift relation and the growth rate of structure.

Galaxy clusters. The Galaxy Cluster technique is sensitive to dark energy through its effect on a combination of the angular-diameter distance vs. redshift relation, the time evolution of the expansion rate, and the growth rate of structure. 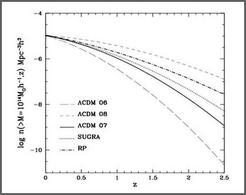 The density of clusters for a variety of dark energy models.