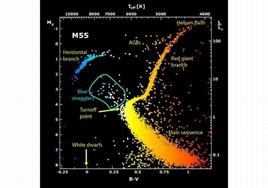 The Herzprung-Russel diagram of the Globular Cluster M55, showing the different regions occupied by stars in different phases of their evolution, depending on their initial mass. 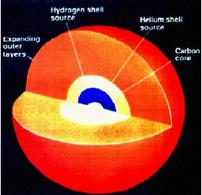 The internal structure of a massive star with a carbon core. 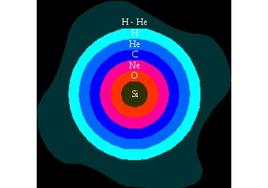 Internal structure of a massive star with a Si core. 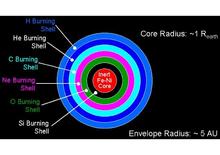 The shell structure of a massive star with a Fe core. 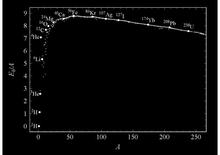 The binding energy per nucleon as a function of mass number, A.

As the iron peak is approached, the energy released per unit mass of reactant decreases. Thus the timescale becomes shorter and shorter. 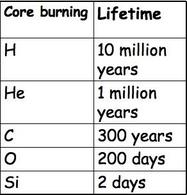 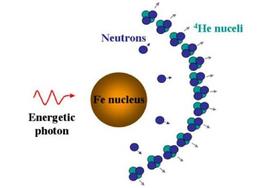 Furthermore, free electrons (which were providing support through degeneracy pressure) get captured by the protons produced by photodisintegration:

An enormous amount of energy is carried away by the neutrinos; about 10 million times more energy than carried by the photons (the luminosity)!

Most of the (heavy) core’s pressure support has disappeared very quickly and it starts to rapidly collapse.

The typical central core density for a 15 MSun star is 1013 kg/m3. What is the free-fall time for core collapse?

(work out the answer before checking the result on next slide)

The inner core collapses, leaving the surrounding material suspended above it, and in supersonic free-fall at velocities of ~100,000 km/s.

The core density increases to 3x the density of an atomic nucleus and becomes supported by neutron degeneracy pressure.

As the shock wave propagates outward and encounters the infalling core, the high temperatures result in further photodisintegration. 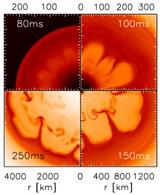 The growth of instabilities after core collapse, which are believed to play a fundamental role in allowing the shock to emerge from the stellar interior. 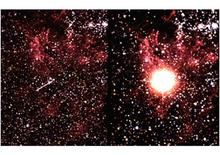 SN1987A before (left) and after (right) the Supernova explosion. 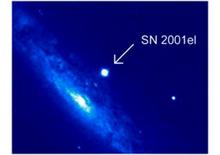 An example of a supernova explosion in a Spiral Galaxy. 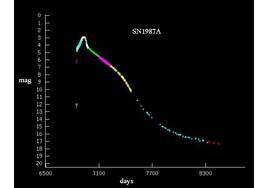 An example of a Supernova lightcurve. The different colors show the intervals dominated by the radioactive decay of a specific element (see next slides).

This decay is a statistical process: the rate of decay must be proportional to the number of atoms in the gas:

The energy production rate is proportional to dN/dt: thus we can measure the half-life of decay from the light curve and deduce what species are present.

The energy released by the decay of one cobalt-56 atom is 3.72 MeV.
Given 0.075 M⊙ of this isotope (this is how much was estimated to have been produced in SN1987A) how much energy does the decay release?

where t is measured in years. 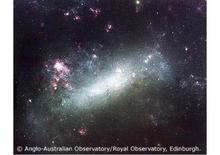 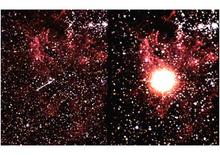 SN1987A before and after the explosion. 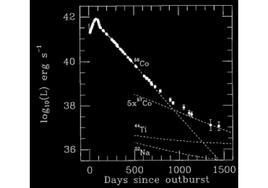 The lightcurve of SN1987A. The contributions of the different decaying radioactive elements, add up to form the total luminosity at any given timescale. 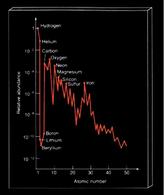