In fact these temperatures are too low for Bremsstrahlung to be dominant.

The image on the left shows an X-ray image of a massive elliptical galaxy whose emission is almost entirely due to the radiative recombination and line emission processes described below.
In the lower left corner the smaller companion NGC1404 has a much smaller and compact halo. Several compact sources, mostly background AGNs and accreting bynary stars (see later lectures), are also visible. 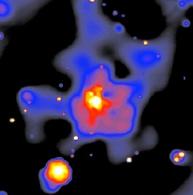 X-ray image of the massive elliptical galaxy NGC 1399 in the Fornax cluster. The emission is represented on a logarithmic color scale which traces the surface brightness. Courtesy of M.Paolillo.

This emission process was first observed in the corona of the Sun, and thus it is called “coronal emission”.

The turbulence in the upper layer of a star creates magnetic loops trapped inside the sun’s plasma, whose energy can heat the corona to temperatures that allow it to emit X-rays through radiative recombination and line emission. 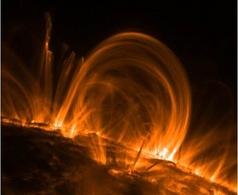 This is a solar coronal loop imaged by the TRACE satellite. Courtesy of NASA.

5.  Under these conditions, ionization and emission result primarily from collisions of ions with electrons, and collisions with ions can be ignored.

Finally, in galaxies and clusters (but not in stellar coronae) the time scales for ionization and recombination are generally considerably less than the age of the system or any relevant hydrodynamic time scale, and the plasma can therefore be assumed to be in ionization equilibrium. 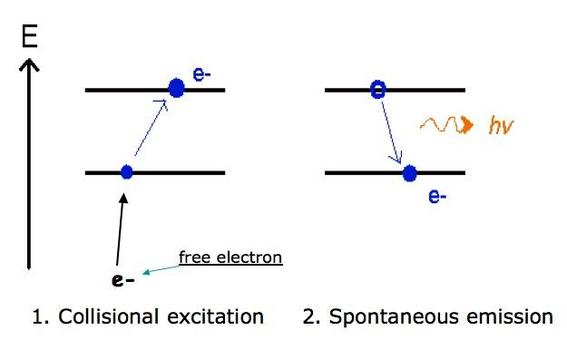 The helium and hydrogen in stellar, galactic and cluster coronae is all ionized, so X-ray line emission comes from transitions in trace element atoms.

The X-ray continuum emission from a hot diffuse plasma is due primarily to three processes:

The emissivity (emission per unit volume) for thermal Bremsstrahlung, as discussed in a previous lecture, is given by:

The radiative recombination (bound-free) continuum emissivity is usually calculated by applying the Milne relation for detailed balance to the photoionization cross sections, which yields the following emissivity expression:

Processes that contribute to the X-ray line emission from a diffuse plasma include collisional excitation of valence or inner shell electrons, radiative and dielectronic recombination, inner shell collisional ionization, and radiative cascades following any of these processes.

The emissivity due to a collisionally excited line is usually written (Osterbrock, 1974):

All of the emission processes described above give emissivities that increase proportionally to the ion and electron densities, and otherwise depend only on the temperature.
Thus a general expression for the emissivity in coronal plasmas is given by the formula:

If n(X) is the total density of the element X, then in equilibrium the ionization fractions f(Xi) n(Xi)/n(X) depend only on the temperature, and previous equation can be written as:

This allows to separate the dependence on the temperature, from the one on the density, if we assume to know the ionization fractions and the metallicity of the plasma.

Since most astrophysical observable quantities are integrated over large volumes or at the least over the line of sight, it is useful to define the emission integral EI as:

Then the shape of the spectrum depends only on the abundances of elements n(X)/n(h) and the distribution of temperatures d(EI) / dTg.

The normalization of the spectrum (the overall level or luminosity) is thus set by the EI. 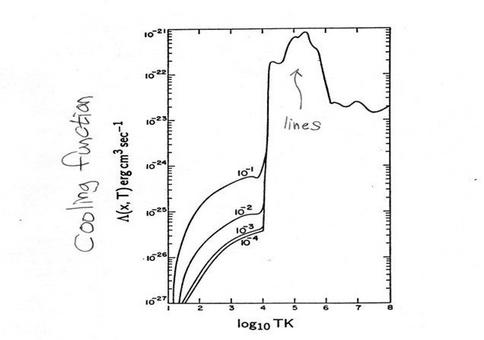 The Cooling Function at low and intermediate X-ray emitting regimes, and its dependence on the metallicity. 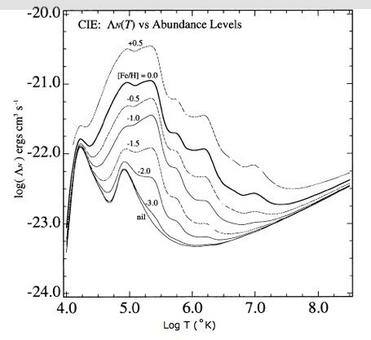 Dependence of the Cooling function on temperature and metallicity of the plasma.

Spectrum of a thermal plasma 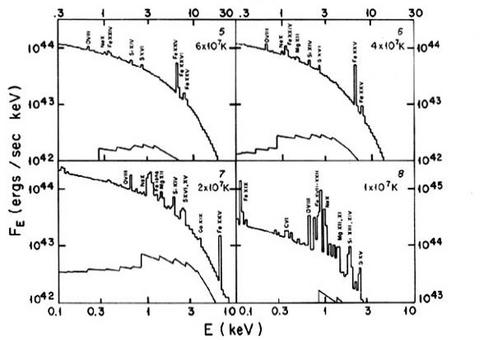 Example of the spectrum produced by the thermal plasma of a galaxy cluster at different temperatures: as the temperature drops the emission lines due to radiative recombination becomes apparent.